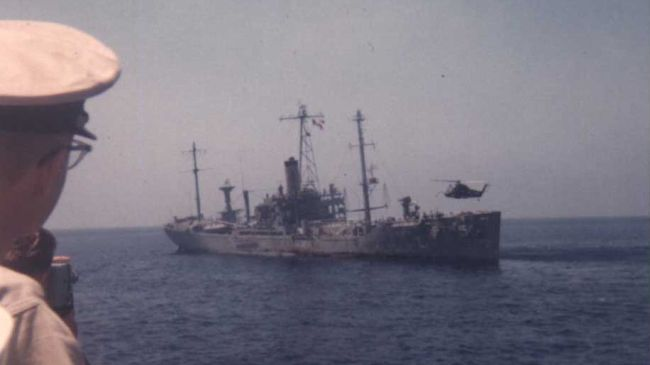 An ongoing federal Freedom of Information Act (FOIA) reveals the US government is refusing to release at least 302 pages of documents concerning an unprovoked attack 54 years ago on an American ship, the USS Liberty (AGTR-5).

In a March 10, 2012, letter Pamela N. Phillips, the chief of the National Security Agency’s Freedom of Information Act (FOIA) section told Joe Meadors: “The National Security Agency (NSA) finalized the review of all material relative to the attack on the USS Liberty and made it available on the Internet.” Ms. Phillips continued: “… any future requests made by you concerning this topic will be filed with your previous FOIA case with no further action by this Agency.”1

Joe Meadors is a persistent researcher on the attack on USS Liberty (AGTR-5). As many Station HYPO readers will know, on June 8, 1967, an attack by Israeli air and naval forces on Liberty killed 34 Americans and injured over 170. Liberty is “the most highly decorated ship … for a single action” in US Navy history.2 Meadors knows all about this because he was among the wounded on that day of storied heroism in the face of infamous treachery.

Fortunately, I was able to obtain the services of an excellent team of attorneys from Davis Wright Tremaine LLP. The attorneys, Thomas Burke, Caesar Kalinowski, and Allexia Arnold, are not only top-notch lawyers but they’re great people to work with and on September 1, 2020, Kinnucan v. National Security Agency et al., (no. 2:20-cv-01309) was filed in the US District Court in Seattle (Burke, Kalinowski, and Arnold did not contribute to or author this article).

According to investigative journalist Stephen Green, the late Robert L. F. Sikes, who was an Appropriations Committee member, said the report I requested contains testimony from a CIA witness that on June 7, 1967, the Israeli government threatened to attack Liberty if she was not moved away from Israel.3 Green also claimed: “The information provided by Representative Sikes has been corroborated by other committee sources who do not wish to be identified”.4 Ostensibly, the NSA is withholding the report at the direction of Congress.

The alleged Israeli threat to attack Liberty was purportedly relayed via a June 7, 1967, cable from the US Defense Attaché in Tel Aviv to the Pentagon.5 I asked the DIA for “All communications and message traffic to or from the Office of Defense Attaché in Israel from June 5, 1967 to June 10, 1967.” The DIA says they have no responsive records.

In the NSA’s A History of U.S. Communications Security: The David G. Boak Lectures, vol. II, it says: “Since those days [1957], no less than 32 … U.S. facilities (embassies, legations, missions) containing crypto-equipment have come under attack, 13 of them during the 6 Day War in the Middle East …” I asked the NSA for records pertaining to the 13 attacks during the 1967 war and for the “Encrypted Traffic Reports … of the USS Little Rock (CLG-4) for the months of May, June, and July of 1967 and/or any analyses or reports that may aggregate or summarize the data/information contained in those reports.” The NSA claims they have no responsive records.

Earlier this year, the CIA released three one-page information reports from June and October of 1967.6 These reports were first released with redactions in the 1970s. Copies obtained by the present lawsuit reveal significant new source information. According to these reports, sources in Tel Aviv stated: “Israel’s forces knew exactly what flag the LIBERTY was flying” and Israeli Defense Minister Moshe Dayan “personally ordered the attack” on Liberty over the objections of senior military officers, one of whom characterized the attack as “pure murder”.

In 1977, CIA Director Turner went on national television and emphasized that these three reports were “raw intelligence”. He quickly shifted the focus away from them onto an “evaluated overall document”.7 A day after Turner’s television appearance Alan D. Wolfe, then the CIA’s Chief of the Near East Division in the Directorate of Operations, commented that the three information reports were “raw reports which in historical hindsight were garbage, but which appeared worthy of dissemination at the time.”8

In available records, Wolfe does not explain on what basis the reports went from “worthy of dissemination” to “garbage.” As an aside, Wolfe was formally reprimanded for his role in the Aldrich Ames spy scandal. In the 1980s, Ames was a Soviet KGB double agent while working as a CIA counterintelligence officer in Rome where Wolfe was then the CIA Station Chief.

In any case, Wolfe also indicates that the “evaluated overall document” Turner cited was an intelligence memorandum dated June 13, 1967. That memo is one of the documents the CIA released to me.9 It does not mention or evaluate the three reports implicating Israeli officials in a knowing attack on Liberty. It could not because it was prepared before the earliest distribution date—June 23, 1967—of the three information reports.

So, in front of a national audience, Turner invoked a memo that he knew had nothing to say about the three reports he and Wolfe dismissed as mere “raw” intelligence. In fact, one of those “raw” reports was more accurate than CIA analysis at the time.

The memo Turner and Wolfe cited claimed there: “was little doubt that the Israelis failed to identify the Liberty as a US ship before or during the attack.”10 The second of the three information reports contained intelligence from a US citizen working for an American newspaper. The source claimed that “Around 10-11 June while in Tel Aviv I talked with an Israeli …” The Israeli reportedly made it clear the attack on Liberty was no mistake and accurately “implied that the ship’s identity was known at least six hours before the attack …”11

From the CIA, I also requested “records pertaining to the response, analysis, evaluation of, and/or decision not to evaluate, the 1967 CIA ‘Information Report’ ” implicating Dayan. None of the documents provided so far by the CIA mention or evaluate the three reports implicating Israeli officials in a knowing attack on Liberty nor do any of them reference the alleged June 7, 1967, cable from the Defense Attaché in Tel Aviv.

However, the CIA admits they are withholding in their entirety three other documents totaling 173 pages. The CIA had never before publicly acknowledged the existence of these documents. Based on timing, two of the three documents the CIA refuses to release could conceivably include evaluations of one or two of the three information reports. The CIA describes each of the two documents as an “Internal Document Prepared for the Purpose of Providing a Briefing on Several Topics”.

If you look into the Israeli attack on Liberty you will quickly encounter claims that the attack has been investigated multiple times by the US government, which, it is claimed, always found the attack was a tragic case of mistaken identity. In fact, following the 1967 attack, the US Navy undertook a hasty and incomplete Naval Court of Inquiry (NCOI) that found: “Available evidence combines to indicate the attack on LIBERTY on 8 June was in fact a case of mistaken identity.”12

However, the June 28, 1967, Defense Department public summary of proceedings of the inquiry into the attack stated: “It was not the responsibility of the Court to rule on the culpability of the attackers and no evidence was heard from the attacking nation”.13 In 2005, the Navy’s Office of the Judge Advocate General told a member of Congress that: “The Court of Inquiry was the only United States Government investigation into the attack.”14

Many of Liberty’s surviving crew dispute the claim of mistaken identity. Over the years they have been joined in that by American officials including Richard Helms (Director of Central Intelligence, 1966-1973), Lieut. Gen. Marshall S. Carter (Director of the NSA, 1965-1969), Captain Ward Boston, Jr., JAGC (legal counsel for the 1967 NCOI), and former Chairman of the Joint Chiefs of Staff Admiral Thomas H. Moorer.15, 16

Perhaps all the relevant evidence, when properly analyzed in context, supports the mistaken identity conclusion. However, if the evidence supports that hypothesis then why, after more than five decades, is the US government still refusing to release more than 300 pages of records relevant to understanding the deadly attack? And what other relevant records are they withholding that we don’t even know about? Hopefully, Kinnucan v. National Security Agency et al. will pry some of these records loose and bring others to light.

12. US Navy, Office of the Judge Advocate General, “Record of Proceedings, Court of Inquiry to Inquire into the Circumstances Surrounding the Armed Attack on USS LIBERTY (AGTR-5) on 8 June 1967” pp. 161. The entire NCOI record for the Liberty attack is available at: https://www.jag.navy.mil/library/jagman_investigations.htm The page quoted is included in Part 6 at: https://www.jag.navy.mil/library/investigations/LIBERTY%20ATTACK%20PT%206.pdf

Michelle Kinnucan is an honorably discharged US Coast Guard and Army veteran and an honorary crewmember of the USS Liberty Veterans Association. She is also an independent researcher whose writing has appeared in PS: Political Science and Politics, Common Dreams, Critical Moment, Palestine Chronicle, Arab American News, and elsewhere. Her 2004 investigative report on the Global Intelligence Working Group was featured in Censored 2005: The Top 25 Censored Stories (Seven Stories Pr., 2004) and she contributed a chapter to Finding the Force of the Star Wars Franchise (Peter Lang, 2006).