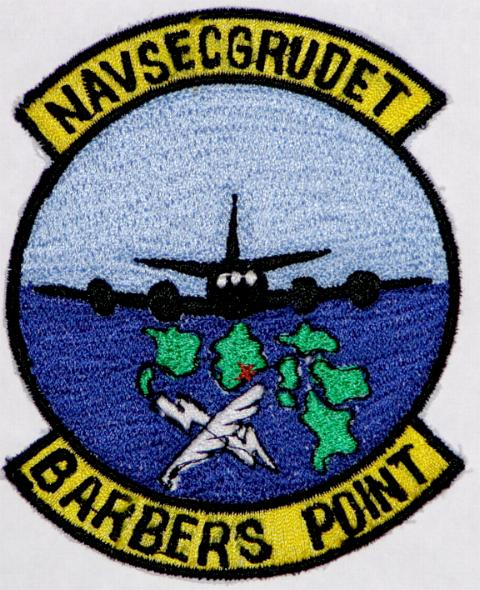 On September 30, 2005, NSGD Kaneohe Bay was administratively closed and was reestablished on October 1, 2005 as the Navy Information Operations Detachment (NIOD) Kaneohe Bay, HI.  NIOD Kaneohe Bay is subordinate to, and a detachment of, NIOC Hawaii, Schofield Barracks, HI.

Barbers Point was named for Henry Barber, master of Arthur, a 100-foot British brigantine that ran aground on the point of Oahu during a storm in 1796. The Barbers Point tale first emerged from vintage Pacific lore, when a vicious tropical depression battered the southwest coastline of Oahu. Captain Henry Barber, determined to get underway despite the storm, hoisted anchor on his 100-foot brig Arthur on October 31, 1796. All other captains held their ships in port while Arthur was deluged by wind, rain and pounding surf. The ship went down taking with it all but six crewmembers and its captain. The seven survivors struggled ashore near a tract of land referred to by native Hawaiians as “Kalaeloa” (long cape or headland), a legendary birthplace of Hawaiian Kings. Kalaeloa later became known as Barbers Point.

In the early 1930’s, the Navy leased a 3,000 square foot piece of land from the estate of James Campbell. This tract was to be used as a mooring location for the dirigible, Akron. During the 1930s, the Navy leased a section of the James Campbell estate, building a 1,500-foot Outlying Field (OLF) near the mooring mast that had been erected for use by U.S. Navy airships, none of which ever cruised to Hawaii. Once the original lease expired, in September 1940, an additional 3,500 acres were acquired from the Campbell estate for the enlargement of the OLF, which became Marine Corps Air Station (MCAS) Ewa. The site, chosen for its ideal peacetime air training atmosphere, was completed in early 1941. Concurrently with the groundbreaking, plans were already being developed for an expansion of naval aviation facilities at Barbers Point.

Construction of an airfield west of Ewa began in November 1941, but was temporarily suspended after the Japanese attack on Pearl Harbor so that construction crews could rapidly complete Ewa.

Base construction was well underway by December 7, 1941, when the Japanese attacked U.S. forces in Hawaii, marking the United States’ entrance into World War II. Although much of the attack was concentrated at Pearl Harbor, Wheeler Air Force Base and Hickam Field, the Ewa Marine Corps Air Station (and its supporting equipment) sustained a great deal of damage. Nine of 11 total Wildcats, 19 of 32 scout bombers and all six utility aircraft were rendered inoperable. The Pearl Harbor attack, along with the increasing need for additional facilities to train pilots led to an extensive construction project. Barbers Point, originally intended as an OLF for NAS Ford Island in Pearl Harbor, was still not complete when it was established as a Naval Air Station on April 15, 1942 with 14 officers and 242 enlisted personnel.

The Naval Air Station quickly became a busy hub of aviation activity as the Navy amassed forces in Hawaii to carry the war across the Pacific. Base operations centered on working up Carrier Air Groups (CAGs) and squadrons for deployment to combat theaters farther west. As World War II raged in the Pacific theater, the troop and equipment capacity of the yet unfinished base more than doubled. Barbers Point’s level of activity grew steadily during the war. By the end of World War II, Barbers Point was home to almost 13,000 personnel. After the Japanese surrender, Barbers Point served as a demobilization center for more than 6,000 personnel leaving for civilian life.

By the end of 1947, the future of the station was uncertain in the face of post-war budget constraints. During the late 1940s the station was the beneficiary of a consolidation of Naval aviation facilities on the leeward side of the island. The role of NAS Barbers Point was solidified in 1949, when it began supporting all aviation operations on leeward Oahu. Barbers Point absorbed MCAS Ewa in 1952 as Marine Corps units were shifted to Kaneohe Bay, which had been closed as an NAS in 1949. NAS Honolulu was reduced to an OLF for seaplanes and operations at Ford Island were reduced. The Coast Guard aircraft at Kaneohe Bay were moved to Barbers Point.

When the war in Korea began in 1950, NAS Barbers Point again became a critical staging area for supplies, equipment and forward deploying squadrons. Eight hundred additional Sailors were assigned to the station. New construction included weapons and jet engine test sites, a survival equipment shop and more than 1,000 housing units. With state of the art equipment and facilities, NAS Barbers Point was one of the most modern VP homeports in the world.

Coast Guard aviation first arrived in the Hawaiian archipelago in 1945 when Lieutenant G.W. Girdler received command of eighteen enlisted men and five officers at what was then Naval Air Station Kaneohe. With aviation assets consisting solely of two Consolidated PBY-5 “Catalina’s” and one Grumman JRF “Goose”, the air unit maintained a proctorship for the windward side of Oahu, in addition to making periodic visits to the Philippines, China and Japan. In March, 1949, the Navy and the Coast Guard moved to Naval Air Station Barbers Point; the Coast Guard as an NAS tenant. In 1965, the USCG unit received its current designation as Coast Guard Air Station Barbers Point. The U.S. Coast Guard Air Station continues to reside at Barbers Point, and now serves general aviation on Oahu and hosts units of the Hawaii National Guard.

Base Realignment and Closure (BRAC)

The end of the cold war eventually brought about the closure of NAS Barbers Point. Congress accepted the recommendation of the 1993 Base Realignment and Closure Commission that Barbers Point be closed. Naval aviation still maintains a formidable presence in Hawaii. Commander Patrol and Reconnaissance Force, Pacific and the last five Navy squadrons at Barbers Point, Helicopter Antisubmarine Squadron Light 37 (HSL-37); Special Projects Patrol Squadron 2 (VPU-2), and Patrol Squadrons VP-4, VP-9, and VP-47 were transferred in early 1999 to Marine Corps Air Facility (MCAF) Kaneohe Bay, part of Marine Corps Base Hawaii, located on the windward side of Oahu. The return to Kaneohe is a homecoming of sorts for the patrol squadrons. Kaneohe was a prominent patrol aviation base before and during World War II.

The Navy’s last Naval Air Station in the Hawaiian Islands was disestablished during a July 1, 1999 ceremony, closing out 57 years of service. NAS Barbers Point, the “Crossroads of the Pacific”, carved out of brush and coral on the leeward side of Oahu early in World War II, has been turned over to the state of Hawaii. 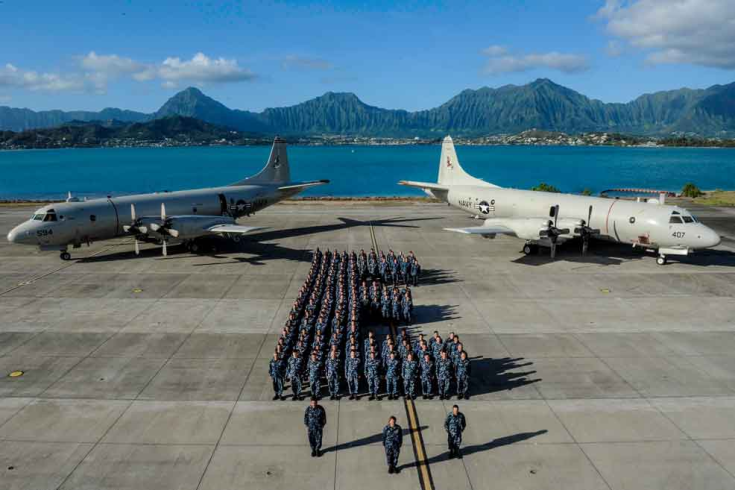 The biggest highlight is that children, as well as adults, can actually climb into the cockpit of a real fighter jet, don flight gear and take pictures. The Museum has four retired Navy fighter and attack jets, one UP-3A Orion (an older version of the P-3C’s used at NAS Barbers Point for ASW missions for over 40 years), a Marine Corps CH-53D Sea Stallion helicopter, and numerous military ground vehicles and equipment.

The first two aircraft acquired from the Navy were an F-4N Phantom II and an A-4E Skyhawk. Both aircraft were in Defense Reutilization Marketing Organization Hawaii

(DRMO Hawaii) and slated to be cut up for scrap. Subsequently, the Museum added two more A-4E Skyhawks, a UH-1H Huey, and two UH-3H Sea Kings to the Museum’s growing fleet. As of 2007, the Museum was anxiously awaiting the delivery of four WWII-era aircraft. 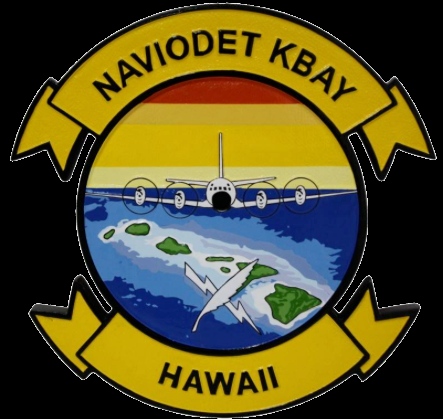 The Navy retained 1,100 acres for military housing and family support facilities. The Department of Defense declared approximately 2,150 acres of land at the Barbers Point Naval Air Station to be surplus to its needs and under a base realignment conveyed those surplus lands to the various end users identified by the community reuse plan. The 2,150-acre section was ceded to Hawaii and the city and county of Honolulu on June 28, 2002; and was officially designated as the Kalaeloa Community Development District. The goal of the Hawaii community development authority is to attract private sector investment.