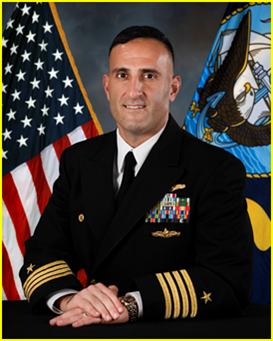 CAPT Salehi, a native of Fairfax, VA, graduated and was commissioned in 1999 from the University of South Carolina.  From 2000 to 2002, CAPT Salehi served aboard the USS PHILILIPPINE SEA (CG-58), homeported in Mayport, FL. CAPT Salehi made deployments to both the Mediterranean and Persian Gulf in support of UN Sanctions against Iraq and during Operation Enduring Freedom.

In 2004, CAPT Salehi was redesignated as a Special Duty Officer (Cryptology), and was subsequently sent to the Defense Language Institute (DLI).  In 2005, he graduated from the Persian-Farsi Basic Course with an Associate of Arts Degree, and transferred to Navy Information Operations Command, Georgia and National Security Agency, Georgia (NSAG).  While at NSAG, he served as the Command’s Senior Watch Officer (SWO), and as Deputy Branch Chief of a Target Office of Primary Interest. From 2007-2008, CAPT Salehi served as Chief Staff Officer for the Fleet Information Operations Center (FIOC), providing Information Warfare support to naval combatants in EUCOM and CENTCOM AORs.

In April 2012, CAPT Salehi reported to Headquarters, Pacific Fleet where he was assigned as Deputy and Acting Branch Chief, N391, leading 25 personnel in all Fleet Cryptologic, Cyber, and Information Operations activities supporting the Pacific Fleet Commander.

In March 2014, he was assigned as the Fleet Cryptologic Resource Coordinator for Seventh Fleet, permanently embarked on the USS BLUE RIDGE (LCC-19) and forward deployed to Yokosuka, Japan. At FNDF, he led and managed the execution of all maritime surface, subsurface, air, and expeditionary Cryptologic augmentation, tasking, and operations in support of the Seventh Fleet Commander.

In September 2016, CAPT Salehi transferred to Navy Information Operations Command, Hawaii where he was assigned as the Operations Director and CTG 1070.1 Commander, and subsequently assumed duties as the Executive Officer and Task Force 1070 Deputy Commander in June 2017.

CAPT Salehi is a Joint Qualified Officer and has earned a graduate certificate in Cyber Security from the Naval postgraduate School.  CAPT Salehi is married to his wife, Gina, and has two sons.