The Strange Case of the Sinop Destroyer 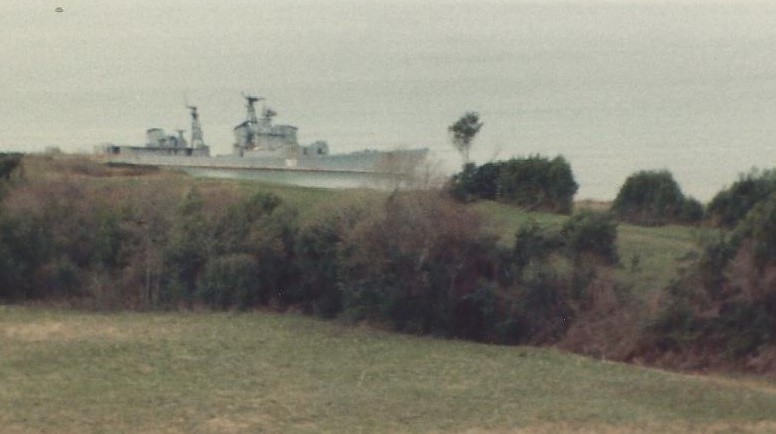 Thirty one years ago, circa January 1990, sitting in the Navy Liaison Office at Fort George G. Meade, I briefed the Sinop Station Executive Officer, LT. Ron Furlong on current events and issues.  The Berlin Wall came down and the Soviet Union was following in kind.  President Reagan had indeed ended the Cold War.  Still many items to consider, however.

After our discussions, LT. Furlong invited me to travel back to Sinop with him to direct my briefing to the Navy Detachment.  I was very honored to do so.  Back to Turkey after my first Naval Security Group duty station assignment after more than 30 years was exciting.  I had enjoyed my first duty station and the Turkish people and their culture.

After a pleasant journey, LT. Furlong and I arrived in Sinop and I was introduced to the Officer-in-Charge LCDR Jeff Fuller.  The following day I met with Detachment personnel for informal operational intelligence discussions.  The OIC was very interested and asked if I would be willing to meet with selected Turkish counterparts.  I asked only that my comments be monitored for security purposes.  The following day I was presented to a Turkish group for limited discussions.  At the conclusion, the Turkish ‘leader’ came to me and announced that I was to accompany him back to his station and work with his group!!!  I turned to LCDR Fuller for assistance!! I was not required to accompany the Turkish commander.

During my stay at Sinop, I learned that a Russian Mod-Kotlin Class Destroyer had ran aground and seemingly abandoned offshore not far from Sinop.  The destroyer had been under tow destined for a Turkish breaking yard when it encountered inclement weather and broke its tow.  The towing tug returned to Port Sevastopol’ leaving the destroyer adrift.  While eating pizza downtown Sinop with some Navy mates (MCPO Mike Ford and SCPO Jim Riley and a few Army).  I suggested that it would be interesting to do a little reconnaissance.  All agreed and a plan was developed.

Fortunately, one of the Army guys was the base JAG so we had the legal part of our plan ‘blessed’.  The names of the three Army teammates are not presented.

Project 56PLO Spokojnyj (tranquil) (Mod-Kotlin) Class Destroyer “Naporistyj” (assertive) Hull Number 517 was lying just offshore.  We would require a means to board her.

One of the crew knew a local fisherman who was willing to lend us a small boat.  We loaded the small boat on a vehicle and headed for the target site.  When we arrived, it was discovered that Naporistyj was at the bottom of a very large hill and we would not be able to drive to the beach.

We reluctantly decided that we would have to walk the boat down the hill to the beach…this turned out to be more difficult than we had anticipated.

rriving at the beach, we discovered that we had forgotten something ….the oars!!  We had no means to propel the small boat out to the destroyer waiting for us.

Luckily, one of the Army guys was a diver and had the idea to bring his wet suit in the event we might want to have a look under the hull.  He swam out to the ship and climbed aboard.  He found some scrap boards and brought them back for us to use as paddles.

The six explorers (three Navy and three Army) arrived on board with no one to greet us.  The ship was stable enough with just the aft port side awash.

We scoured the ship fore and aft….bridge to lower decks.  We were searching for anything of some intelligence value.  Manuals, books of any kind, electronics, etc.  In the aloft radar operators compartment it seemed that he ‘lived’ there with pillows and blankets still present.  Nothing of value for our gang was found.

We did enter sick bay below decks and found a multitude of pills and tonics just scattered around.  We retrieved samples and eventually forwarded them to BuMed.  We never heard any results.

Having found nothing of real intelligence value we decided to play tourist and remove a great deal of memorabilia.  All the hatches had a brass marker indicating the compartment purpose.  One item which I called dibs was a pencil drawing of Lenin that had been glued onto a piece of plywood.  I assume some talented sailor onboard had made it.

We also discovered the crew post box attached to the side of the bulkhead which provided us with the ship’s Military Postal Number “V/Ch 60025, Sevastopol’ 54”.

I think we all had a grand time with our discovery and exploration. Time to go home with our bounty that we had loaded in garbage bags.

We then had to drag the ‘little explorer’ back up that hill to the truck.  It was a breeze coming down but going up was another story.  We made it!!!  What a great team!!!

A special thanks to CWO5 Kevin Schneider for allowing Station HYPO to post this story.

4 thoughts on “The Strange Case of the Sinop Destroyer”