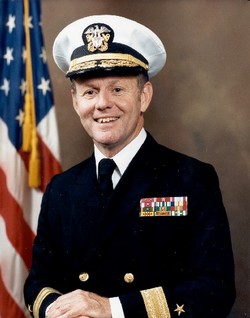 A native of Portland, Oregon, Rear Admiral McFarland graduated from Lewis and Clark College. His Naval career began in 1953 when he enlisted in the Naval Reserve. As a Third Class Petty Officer (YN), he was commissioned in 1957. After Communications School in Newport, Rhode Island, he spent four years in Hawaii working in Signals Security and making training and communications readiness visits to over 200 U.S. Navy ships. Staff duty in Washington, D.C. with Commander Naval Security Group followed from 1961-1963. This was followed by operational assignments at Karamursel, Turkey, and on USS Belmont (AGTR 4) as the Special Operations Officer.

In 1967, he left the Staff, U.S. Atlantic Fleet for Vietnam, where he served primarily in support of U.S. Marine Corp Forces in support of tactical ground operations. The Armed Forces Staff College was next followed by a tour as Middle East Operations Officer. In 1971, he became the first Office-In-Charge of the Navy’s Current Support Group (CSG) in Rota, Spain where the unit earned the Navy Unit Citation for its support of the U.S. SIXTH Fleet during the Yom Kippur War and the 1974 Cyprus crisis. He returned to the Staff, U.S. Atlantic Fleet from 1975 to 1979. His next assignment was as the Commanding Officer of the Naval Security Group Activity (NSGA) Misawa, Japan where he assumed command on 5 March 1979.

In 1981, Rear Admiral McFarland assumed duty as Chief, Naval Forces Division, at the National Security Agency (NSA); and in 1983, was assigned as the Assistant Chief of Staff for Cryptology, Commander U.S. Pacific Fleet; Director, Naval Security Group Pacific (DIRNSGPAC). Early in 1985, he was selected for Flag Rank. His last assignment was as Commander of the Naval Security Group Command (CNSG) from August 1986 to July 1990. Rear Admiral McFarland was also assigned as the Deputy Director of Naval Intelligence (DNI) for the Chief of Naval Operations (CNO).

Some of his personal decorations include the Bronze Star with Combat distinguishing device, Meritorious Service Medals and the Joint Service Commendation Medal.

Admiral McFarland was a kind and generous man who is missed and remembered with fond memories.

In a brief ceremony at the Headquarters, Naval Security Group Command on 25 July 1969, the following citation was read to all assembled:

On 13 April, 1969, Lieutenant Commander McFarland was assigned as liaison officer to the Fifth Special Forces Unit, THUONG DUC SFC, Vietnam. At approximately 1100 hours on the morning of the 13th, the camp was taken under intensive and extremely accurate mortar and rocket attack. Heavy casualties were inflicted on friendly forces within the first few minutes of the attack and within ten minutes seventy per cent casualties were suffered.

As the attack intensified, the enemy began preparations for a frontal assault of battalion size. The battle raged for over six hours with all perimeters subjected to heavy attack, including hand-to-hand fighting. During this action, LCDR McPARLAND distinguished himself by repeatedly rallying Vietnamese soldiers and directing effective zones of fire. Several times he left the relative safety of his perimeter bunker to assist In repulsing enemy infiltrators. On one such occasion he killed three enemy about to satchel charge the camp command bunker with automatic weapon fire and successfully turned back additional attackers with grenades.

LCDR McFarland’s valor under fire is hereby awarded by presentation of the Bronze Star with “V” (second award) and the Navy Combat Action Medal.”