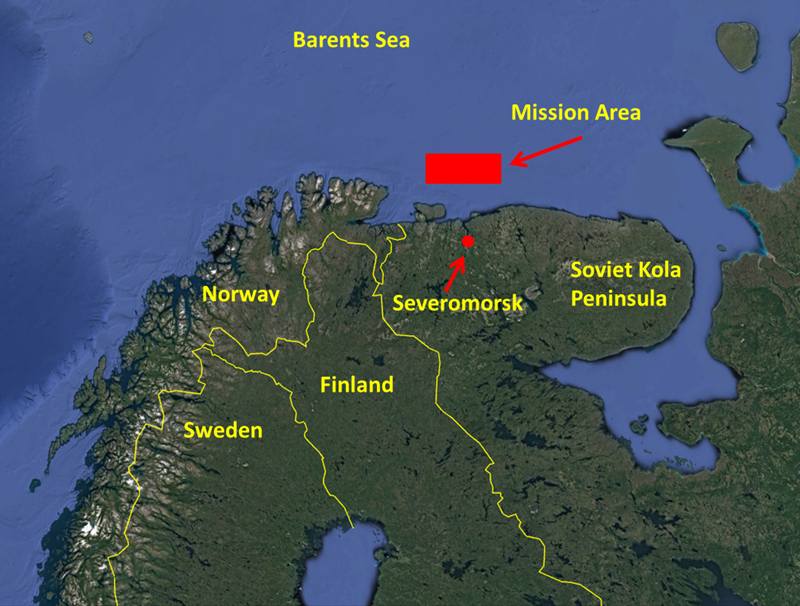 The Mission – According to Blind Man’s Bluff:

Before the COCHINO got underway for area Able, Austin ensured he had his lead-lined log book full of various data to assist him with the mission. By Saturday, August 20, 1949, the COCHINO and TUSK were both in the Barents Sea.  In accordance with the plan the submarines separated with the TUSK off to conduct sonar tests, and the COCHINO to head towards a spot about 12 miles off the northern tip of Norway to begin Austin’s mission.  From here on out, the skipper would order the course changes requested by Austin, zig-zagging the submarine as Austin and Schaeffer tried to intercept Soviet signals.  Because of the special dog ear antennas mounted to the tower, the COCHINO needed to operate in a semi-submerged broached condition exposing her sail.  This significantly increased the possibility for detection, so most of the collection attempts were at night.

By now the COCHINO was about 125-150 miles away from the Soviet Kola Peninsula, home of the Soviet North Fleet Head Quarters, Severomorsk.  This was too far away to see land, but close enough to intercept Soviet missile telemetry.  This was about as close as Benitez wanted to go.

Austin was searching for telemetry signals coming from Severomorsk or from Soviet ships nearby.  Because missile telemetry were usually transmitted above high frequency (HF) engineers designed Austin’s black boxes to receive signals above HF in the attempt to intercept missile launches in progress.

There was no way to know whether the Soviets had planned any launches at all.  All Austin could do was search for any activity throughout the radio spectrum.  Occasionally, he would use the equipment installed in the radio room to search for Russian voice and Morse code communications.  Although Austin did not speak Russian, he was able to use the COCHINO’s manual typewriter to pick out the Cyrillic alphabet in Morse code to determine the type of Soviet Naval activity in the surrounding Barents Sea.

Three days passed, and Austin had collected only a few Soviet voice and Morse code transmissions.  Benitez decided to make one more nighttime pass to give Austin a change to find what he was looking for.  Austin would have been willing to sit for weeks to intercept and record Soviet missile telemetry, but it was not the right time.

It was on this last evening that something began to come through.  It didn’t sound like a launch, but Austin had also been told to look out for equipment tests.  Maybe that’s what was going on.  Maybe the Russians were tuning up their gear, getting ready for a show.  He asked Benitez to order a turn, to try to position COCHINO for a clearer signal.  Even after that, Austin was still not sure what he was hearing, or even whether it was coming from land or from sea.  All he knew is that it was not voice.

For a moment the frequencies seemed about right for a weapons test.  But there wasn’t nearly enough coming through – in fact, not anywhere near the wash of sound that would have signaled the telemetry from a missile test.  Intelligence officials back home might have imagined the Soviets were engaged in endless launchings, preparing to take their missile to sea.  But if that were the case, the Soviets had taken a break just as COCHINO came near.  Austin’s spy mission was a failure, at least so far.  He was scheduled to get another try later, but for now, COCHINO was going back to her initial mission.  She was going to play hide-and-seek with TUSK so the two submarines could learn how to become hunters and killers.