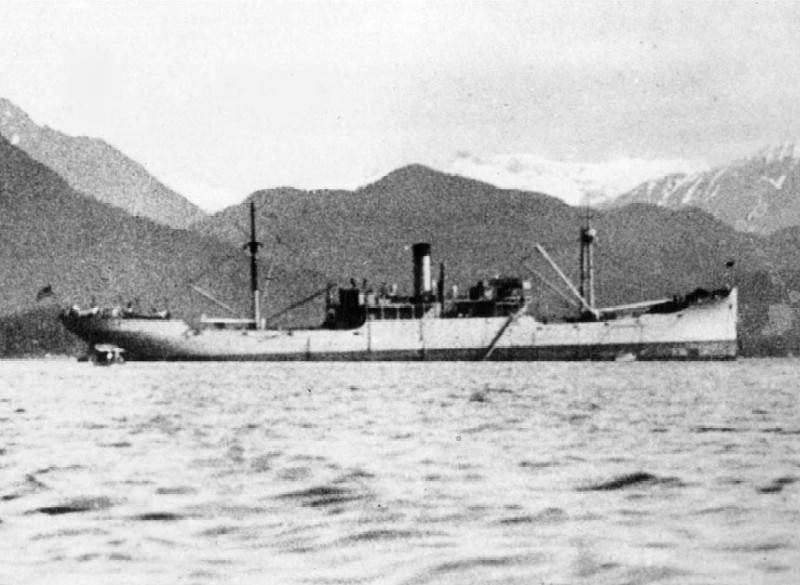 The world in 1948 was awash in a sea of scrap metal left over from World War II, and to ship breakers cutting up the old USS Gold Star she was just another piece of leaky iron monger which had outlived its usefulness.

Even when launched in 1919, she was nearly obsolete; her old-fashioned coal-fired boilers and triple expansion engine could hardly push the ungraceful 491-foot freighter faster than 11 knots.  Still, for three decades USS Gold Star dutifully delivered general cargo for the Navy and became a familiar sight in the far-flung ports of the western Pacific.  Before the war, she made frequent voyages to Guam, China, Alaska, and points in between.  With a colorless mission and a crew beset with boredom, the Gold Star easily could have supplied the inspiration for the USS Reluctant featured in the novel Mister Roberts, which sailed “from apathy to tedium with occasional side trips to monotony and ennui.”

Beyond hauling toothpaste and toilet paper, however, the freighter had another mission.  Unbeknownst to all but her captain and three or four of her crew, the USS Gold Star served as a signals collection station.  From the 1920s until December 1941, the ship’s radio shack was a hive of activity.   When her radiomen were not processing their normal traffic, which was minimal, they spent their hours copying Japanese naval and commercial maritime transmissions.  The specially trained Navy operators, drawn from the ranks of the “On The-Roof-Gang,” maintained thousands of pages of meticulous records, which they forwarded to OP-20G in Washington.  The USS Gold Star, in short, was another kind of workhouse that greatly contributed to our understanding of Japanese naval activities and cipher systems.

Following Pearl Harbor, her secret mission was transferred to other facilities, and for the remained of the war, she continued her important but unexciting duties.  By the time hostilities ended the worn-out USS Gold Star had earned one battle star and five other decorations.  No mention was ever made nor was any recognition ever granted for her important cryptologic activities.

In the end, she made a solid contribution to winning the war in the Pacific.