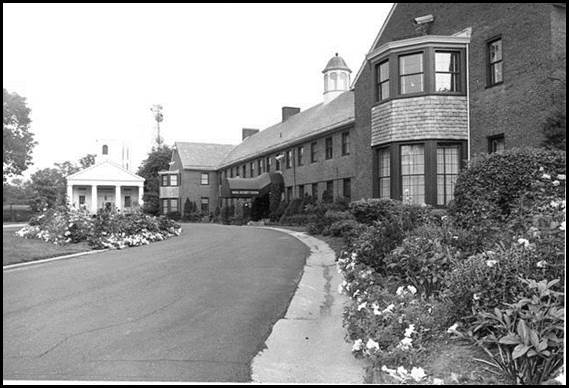 In 1942 Op-20G expanded into seventeen subsections and its chief became as Assistant Director for Communication Intelligence in the Office of Naval Communications. This coincided with the inclusion of all COMINT functions, including direction finding.

On February 7, 1943, Op-20G moved from the Army-Navy Building on Constitution Ave. to the new Communication Supplementary Annex, 3801 Nebraska Ave., Washington D.C.  This location was later renamed Naval Communication Station Washington, D.C. and in September 1950 it became the Naval Security Station.

Elizabeth J. Somers (The George Washington Library) The Nebraska Avenue Complex sits on a tract of land formerly known as Grassland.  Grassland was the country home of Nathan Loughborough, Comptroller of the Treasury under President John Adams. Loughborough is said to be the first resident of the District of Columbia to refuse to pay property taxes under the principle of taxation without representation. Other owners include William Whitney, Secretary of the Navy under Grover Cleveland, and Robert E. Lee, Jr., son of the famous Civil War general.

In 1875, Elizabeth J. Somers founded the Mount Vernon Seminary for girls on F Street. In 1910, Somers expanded with the purchase of 15 acres of land along Nebraska Avenue. New York architect Wesley Sherwood Bessell designed the original buildings on campus that opened on October 3, 1917. Mrs. Somers’s successor, Mrs. Adelia Gates Hensley, continued the expansion and built headmistress residence Gatesly, the chapel, a field house, and gymnasium. By 1928, the school had grown to nine buildings and over 38 acres of land. 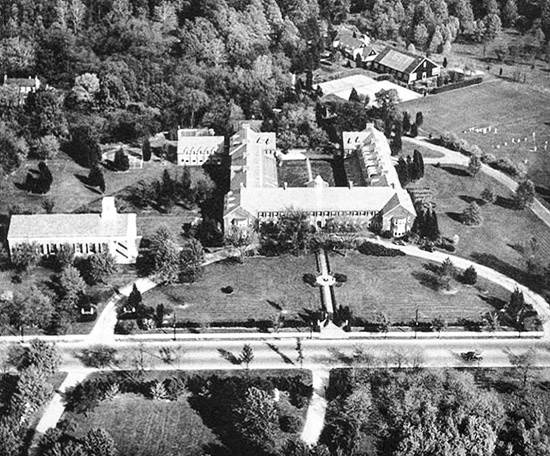 The Nebraska Avenue Complex sits on one of the highest points in Washington D.C. In 1929, work had begun on the Field House (Building 14) and the Gymnasium (Building 12). (Mount Vernon Seminary and College Archives, The George Washington University Library)

The Elizabeth J. Somers Memorial Chapel, designed by Wesley Sherwood Bessell, was constructed in 1925 as a memorial to the seminary’s founding mistress. Contrary to popular myth, the chapel never had a steeple. There is no relationship between the chapel and the steeple located at the intersection of Nebraska Avenue and Van Ness Street.  (Library of Congress)

Mount Vernon students (circa 1930s) enjoyed spending their free time at the Field House at the base of the hill. This building is now the NAC cafeteria. (Mount Vernon Seminary and College Archives, The George Washington University Library)

Almost 100 years later, elements of the main building, once called the Refectory, remain on the campus. The seminary’s motto, Vincit Que se Vincit (she conquers who conquers herself) is fixed in a stone over the center entrance way. The main staircase still exists and now has a rope banister installed by the Navy. Unfortunately, the swimming pool on the lower level no longer exists. (Library of Congress)

Mount Vernon students left for winter break in December 1942 and never returned to the Nebraska Avenue campus. The Mount Vernon Seminary campus was pressed into military service for the Navy’s efforts to decrypt German communications.  Unlike the Navy Department’s building on Constitution Avenue, the campus fit the Navy’s requirements; it was located away from tall buildings; settled on high ground with clear sight lines to the Pentagon, Fort Meade and other military installations; and contained a group of buildings, including a dormitory, that could be immediately converted for Navy use.

The federal government formally acquired the land for $1.1 million on July 20, 1943. The Mount Vernon Seminary first moved north on Massachusetts Avenue to Spring Valley and then south to Foxhall Road where it is now the Mount Vernon Campus of George Washington University.

The newly named Naval Communications Annex became the center for many secret intelligence activities. One of the most important projects was the breaking the German Enigma cipher system. Banks of cryptanalysis machines, known as bombes, operated around the clock at the facility deciphering German code.), Members of the Women’s Reserve of the United States Naval Reserve, known as WAVES (Women Accepted for Voluntary Emergency Service), operated most of the machines. 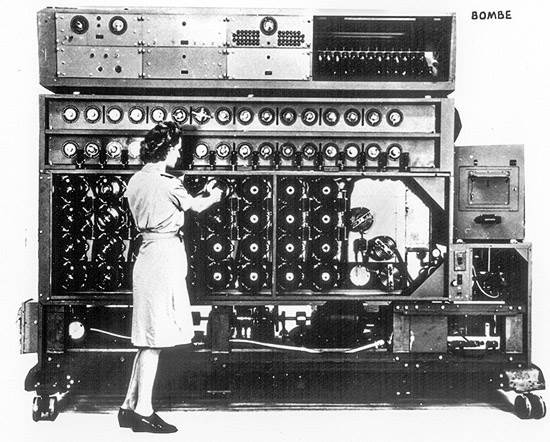 WAVE operates a code breaking machine known as a bombe at the Naval Communications Annex.  The bombes were built in secrecy by WAVES at the National Cash Register Company in Dayton Ohio and shipped to Washington.  Each 5,000 pound bombe stood seven feet high, ten feet long, and two feet deep. (National Security Agency)

In February 1944, nearly 3,000 WAVES were stationed at the Naval Communications Annex. WAVES were sworn to secrecy and told that discussion of their work outside of approved channels could mean facing the death penalty for treason. Inside the bombe decks, WAVES worked long hot hours and never knew how their individual work fit into the cryptanalysis process. 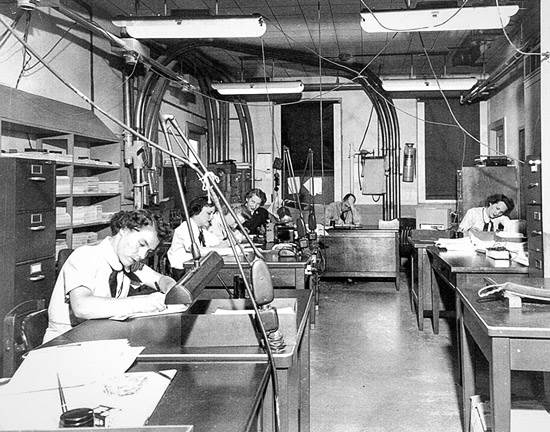 After a WAVE completed a run on her bombe (which took 20 minutes) she gave her print out to her supervisor for verification. The supervisor then took the results to the Watch Office for logging. The verified and logged results were sent via a pneumatic tube system to the cryptanalysts located in Building 2. (National Archives and Records Administration)

Due in part to the efforts of the personnel at the Naval Communications Annex, the Allies broke the German Enigma code in 1944. By May of that year, the German submarine fleet was crippled as Allied intelligence was able to decipher their communication.

Although most joint military intelligence efforts eventually relocated to Ft. Meade, Maryland, with the creation of the National Security Agency (NSA) in 1952, some elements remained at the location renamed to the Naval Security Station (NAVSECSTA). Intelligence operations continued to move to Ft. Meade between 1968 and 1995. In 1998, NAVSECSTA was renamed the Nebraska Avenue Complex (NAC). 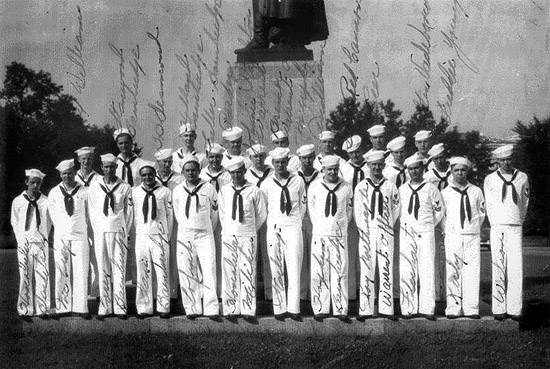 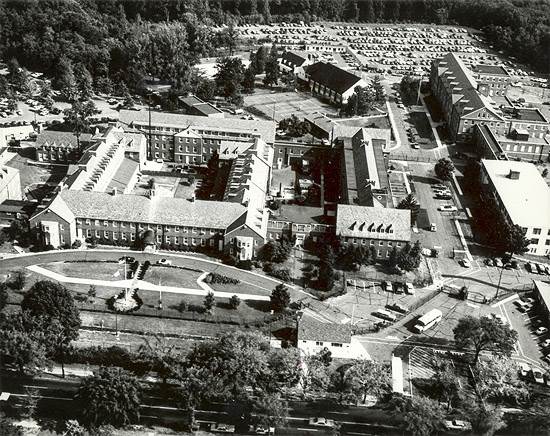 U.S. Naval Security Station (NAVSECSTA). The ”street” names  at the campus intersections reflect history including Grassland Place, Somers Court, Seminary Drive, Intelligence Way, Cryptologic Court, and Enigma Way. Wenger Street is named for Rear Admiral Joseph N. Wenger, a pioneer in the development of machines for use in cryptanalysis and later a leader in the centralization of the Navy Communications Intelligence.  (National Security Agency)

The Department of Homeland Security (DHS) began officially operating at the NAC on January 27, 2003.  DHS selected the NAC because the large campus could accommodate a headquarters operation and the department would not need an exemption from the statutory requirement that main government agency offices be located in the District of Columbia.  The Navy vacated the Nebraska Avenue Complex in 2005. 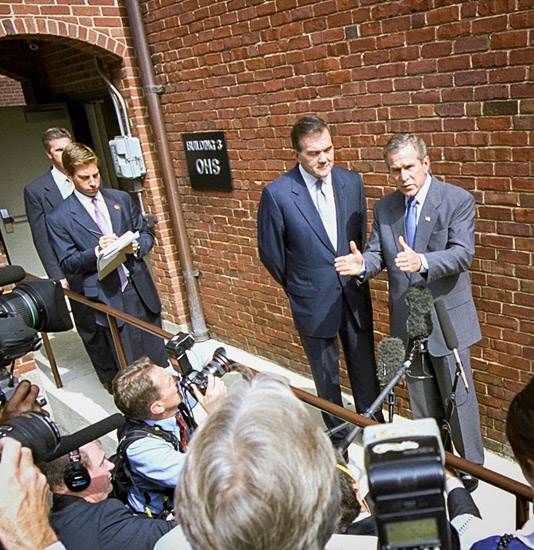 During DHS’s early years at the NAC, the Building 7 and Building 88 Visitor Centers and the Vehicle Screening Building were added.  The perimeter security fence, with guard booths at several entry points, was constructed to provide Level 5 security. 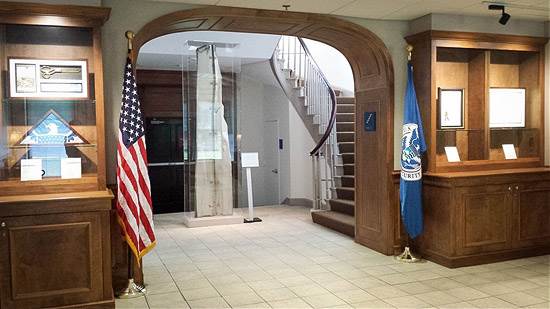 An exhibit of artifacts related to the founding of Homeland Security was installed in the NAC 1 lobby in 2013 to commemorate the 10th Anniversary of DHS’s move to the NAC. (DHS Photo)

In the future, many of the headquarters offices currently located at the NAC will move to the St. Elizabeth’s Campus located in southeast Washington D.C., which will become the new Homeland Security Headquarters.  The NAC will continue to be a DHS occupied facility and will begin a new chapter. 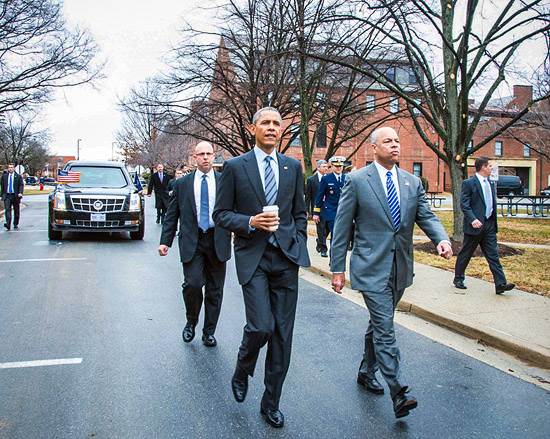