The Electromagnetic Spectrum as a Warfighting Domain? 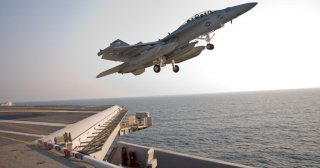 From the article, “Pentagon officials are drafting new policy that would officially recognize the electromagnetic spectrum as a “domain” of warfare, joining land, sea, air, space, and cyberspace…“On the potential motivations:

“Cyber has certainly gotten more attention and, often, money than the electromagnetic spectrum. Would making the spectrum a domain fix that? It would not magically manifest the missing $2 billion a year the Defense Science Board says is needed to rebuild American electronic warfare capabilities such as jamming. Nor would calling the spectrum a domain somehow turn back the clock on the 20 years China and Russia have spent catching up while American electronic warfare largely stood still. Nor would it reduce the American military’s dependence on inherently vulnerable wireless networks for everything from commanding troops to sharing intelligence to flying drones to knowing exactly where we are.”

And the way ahead:

“I wish I could come out and tell you the policy is going to be signed tomorrow and it’s going to declare a sixth domain. I can’t,” Orwan said. “All I can tell you is we’ve been asked to draft a policy and start analyzing the possibility of declaring a sixth domain.

That will take months or years, he warned. “When you’re talking three services that at times don’t work well together, when you’re talking OSD staff… the Joint Staff and COCOMs [combatant commands], getting everybody on the same sheet of music and taking into account their perspectives is a long process.”

Do we need we need to delineate another warfighting domain?

Did we miss an opportunity to do this when cyberspace was declared a domain?

What do you think?