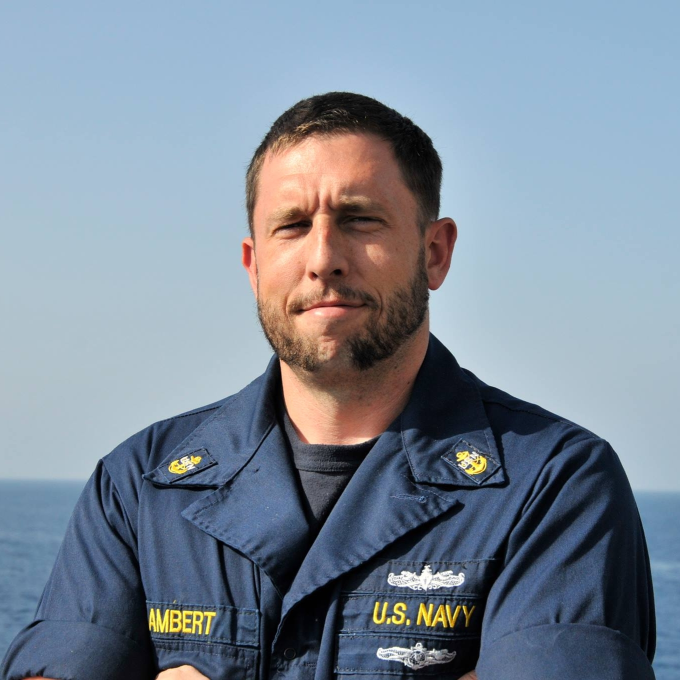 Faithful to the very end of his naval career, Master Chief Lambert answered the call to help sailors in a way few Master Chiefs get to experience.

Although not required because to his rank and responsibilities, Master Chief Lambert, leading by example quickly turned over the Operations Department Senior Enlisted Leader responsibility to CTTCM Brian Williams and immediately started to qualify under the technical guidance of CTR1 Cassandra Robinson, the CTR “A” course supervisor.  Once fully qualified, Master Chief Lambert with the assistance of CTRCS Jeremy Chappell picked class 21095 in February 2021. Shortly after graduating the class in May, Master Chief Lambert retired. His actions are simply a testimony of his character he displayed throughout his 26 years in the U.S Navy.

“It wasn’t easy,” Master Chief Lambert said, “as an older SIGINTer I firmly believe in the basics, the fundamentals.  RF hasn’t changed in the last 26 years too much.  So being able to train with new gear and software was the only real sticking point.  I thought it was fun to drop some knowledge and share 26 years worth of perspective on a class of 19 year olds.  Being in the classroom is hands down the best part of any day here at Corry.  If its lecture, facilitation, or just talking to students about what life is like in the fleet.  The personal aspect of this job is what makes it rewarding for me.”

Master Chief Lambert enlisted from Wooster Ohio at the age of 18.  He attended Boot camp in great lakes and reported for CTR “A” school in OCT 1995.  He completed CTR”A”, as well as DIRSUP, and OUTBOARD “C” Schools and reported to USS Arkansas (CGN 41) as an outboard operator.  In November 1997, the Arkansas was decommissioned and Master Chief Lambert transferred to USS Fife (DD 991) in Yokosuka Japan.  In 1998, the USS Fife shifted homeport to Everett, Washington and later that year conducted counter drug ops in the eastern pacific.

In 1999, he attended the Intermediate Signals Analysis Course (451) and reported to NSGA Bad Aibling, Germany.  While there, he served in a multitude of roles.  JCMA analyst, Target Development analyst and ultimately Mission Director for an entire watch team.  He also deployed to JTF Fervent Archer as a target analyst and reporter.  In 2002, Lambert reported to Naval Information Warfare Activity as a signals Analyst.

In 2005, Master Chief Lambert attended Command and Control Tactical Analysis Course (C2TAC) with following on orders NSGA Whidbey Island and served as a maritime nodal analyst.  While at Whidbey he and made seven deployments in the Forward Deployed Naval Force-Seventh Fleet AOR.

In 2008, he reported to CID Corry station to serve as a C2TAC instructor and course supervisor.  While at Corry Station in 2010, Master Chief Lambert advanced to Chief Petty Officer and subsequently assisted the development and qualification process for command EIWS program.

Following instructor duty in 2012, Master Chief Lambert attended Seaborne Information Warfare Course and reported to USS Iwo Jima (LHD 7) to serve as the SSES LCPO.  While serving on the Iwo Jima, he and his crew completed a 10 month deployment to the 5th and 6th Fleet area of operations followed by a 14 month DPMA yard period.

In 2014, he was cross-decked to USS Mesa Verde (LPD 19) to serve as the SSES LCPO and Operations Department LCPO.  He completing a 9 month deployment followed by another lengthy yard period.

In 2015, following sea duty, Master Chief Lambert received orders to FLTCYBERCOM/COM10FLT to serve as the SIGINT Branch LCPO.  He and his team managed the Navy DIRSUP, IO, EW, SPACE, and SIGINT programs for the Navy as well as providing community and rating guidance to the fleet.

Following staff duty in 2018, Master Chief Lambert returned to Corry Station to serve as the N7 Senior Enlisted Leader for training.  While at Corry Station, CTRCM Lambert advanced to Master Chief. In addition to his administrative responsibilities, he requalified as an instructor and routinely instructed C2TAC and Afloat Cryptologic Management.  He served 26 years in the U.S. Navy.

CTRCM Lambert is married to CTNC Brandy Lambert from Panama City, Florida and they have two children.