In 2006, while operating in the Eastern Mediterranean Sea, the INS Hanit (Sa’ar V) was struck by an Anti-Ship Cruise Missile (ASCM).

The ship was most likely hit by an Iranian version of the C-802, fired by the Hizballah.  At the same time, the Cambodian-flagged merchant ship, MV Moonlight, was struck and sunk by an unknown ASCM.

According to Israel Missile Defense Association (IMDA), the C-802 is “one of the best anti-ship cruise missiles in the world.”  The missile was originally designed and built by China and exported to Iran.  The Iranians “made design changes and improvements, and apparently transferred some of these missiles to Hizballah.”  The missile carries a 165km warhead and is highly accurate, with a range of 75 nm.  The missile utilizes active guidance and reportedly has strong anti-jamming capabilities.

Damage from the missile strike, which killed 4 Israeli Sailors, can be seen in the photo below. 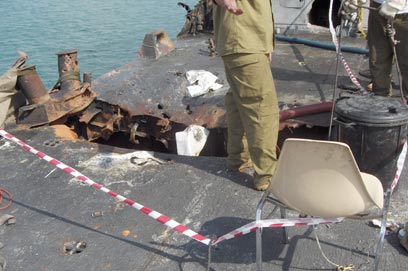 Christopher Carlson of The Admiralty Trilogy completed a detailed analysis of the attack. Key judgements from his analysis follow: