The Imitation Game and the Real John Cairncross 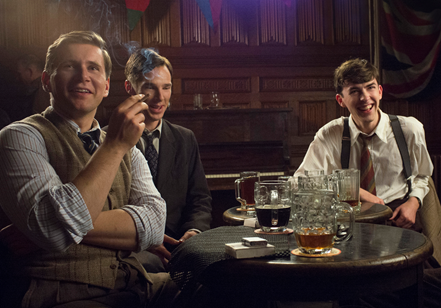 The motion picture about Alan Tuning, The Imitation Game, shows many of the interesting characters who worked at Bletchley Park during World War II. In order to emphasize certain aspects about the life of Dr. Turing the script sometimes portrayed these other characters differently from the way they were m real life.

One of these was John Cairncross, who — after the end of the war — confessed to spying for the Soviet Union.

Although much about his spying career is still murky, History Today would like to compare what we do know with the way Cairncross was portrayed m the film.

In The Imitation Game, Cairncross is portrayed as a cryptanalyst working in the section headed by Alan Tuning, which is trying to solve the German Navy ENIGMA machine and develop the cryptanalytic bombe to exploit it on a regular basis. In a private conversation, Cairncross reveals that he has recognized that Turing is homosexual. When Turing later finds out that Cairncross is secretly bootlegging decrypts to the Soviet Union, Cairncross him from revealing this by threatening to make Tuning’s secret public. Later, Turing learns that Britch intelligence knew of Cairncross illicit life all along and was using him to pass disinformation to the Soviet leader, Joseph Stalin.

In the 1930s, Arnold Deutsch was one of the most effective Soviet agents m the West. Assigned to the UK, Deutsch recognized that the government recruited heavily from among those who attended elite universities. Accordingly, he recruited at least four promising individuals at Cambridge University. During the worldwide Depression many students and professors flirted with communism; a few actually saw the USSR as a model for the future and were willing to engage m underground activities.

Three of the “Cambridge Four” — H.A.R. “Kim” Philby, Donald Maclean, and Guy Burgess’-entered the British diplomatic and intelligence services after graduation; Anthony Blunt, a professor, Joined British counterintelligence during the war. Altogether, they provided a large trove of British secret documents to the Soviets.

John Cairncross, born 1913, came from the working class but attended the University of Glasgow and Trinity College, Cambridge. Placing first in the Civil Service examination, he was accepted into the Foreign Office. When war came and he was about to be taken into the Army, he arranged a transfer to Bletchley Park on the strength of his knowledge of foreign languages.

It 1s not clear when and how he was recruited as a spy. It has been speculated that he joined the Communist Party as early as 1937.

In addition to general knowledge of British SIGINT activities, Cairncross gave the Soviets decrypts from the German TUNNY machine, a sophisticated cipher device used by senior enemy commanders. It 1s most likely that the information Cairncross provided enabled the Soviets to prepare m advance for the major German offensive at Kursk m 1943.

There is no evidence that British intelligence services were cognizant of Cairncross’ espionage activities at the time, nor that they used him to send false information to the Soviets.

In 1944 Cairncross transferred to the MI-6 counterintelligence section, where he worked for – Kim Philby. Coincidence?  Perhaps. Whatever the truth, Cairncross was able to continue passing decrypts to the Soviets; his section received SIGINT needed for its work.

Two of the Cambridge spies, Burgess and Maclean, escaped to the Soviet Union in 1951, just before they were to be arrested. Papers found during the subsequent investigation implicated Cairncross. He was fired from the government, but not prosecuted.

Cairncross worked as a professor of French at two U.S. universities, specializing in 17th century poets. Later, he worked at a bank m Rome. After his secret life became public, he retired to the south of France and died there m 1995.

Historians of espionage have often argued that the Cambridge Four were actually a quintet; they debate whether or not Cairncross was that fifth man. A defector from the KGB m the 1990s said he was, but that did not end the debate. There was only a little interaction among group members; their common factor was the place of their recruitment. The other members of the Cambridge spy ring were from the upper class, whereas Cairncross was not, and, anyway, Cairncross had a reputation as a loner.

In The Imitation Game, Cairncross is shown as a mathematical cryptanalyst who worked m the same section as Alan Turing. In actuality, Cairncross translated decrypts from the German and barely knew Turing.  His autobiography, The Enigma Spy, published posthumously m 1997, mentioned Turing only once, man offhand way.

Cairncross wrote: “I never got to know anyone apart from my direct operational colleagues. We did eight fully-occupied hours of work and then were transported back to our respective lodgings with families m the surrounding villages. Even within my hut [work place], I never met some of the more important personalities …”