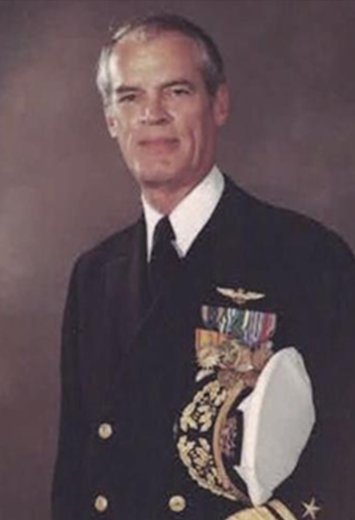 Rear Admiral Eugene S. Ince, Jr., USN, was born in Goshen, Indiana on October 18, 1926 and graduated the U.S. Naval Academy in 1949.  Following graduation from the Academy, he entered flight training and was subsequently designated a naval aviator. He served as a pilot with Attack Squadron 115 and deployed with that squadron to Korean waters aboard USS PHILIPPINE SEA (CV 47) and USS KEARSARGE (CV 33) during 1952 and 1953. In 1954 he was assigned to the Advanced Training Command, Corpus Christi as an instructor.

He graduated from the Naval Intelligence School in 1957 and was certified as a Russian translator/interpreter after completing the Navy Language School in 1958.

Admiral Ince’s first assignment with the cryptologic community was the period  between 1958 and  1961 when he served at the Naval Security Group Activity, Kami Seya, Japan. This tour was followed by an afloat cryptologic experience on the Staff Commander Seventh Fleet.  During this time he was selected as Special Duty Officer-1610 (Cryptology). Upon graduation from the Naval War College in 1964, he served as Aide and Flag Lieutenant to the Commander-in-Chief, Pacific Fleet and subsequently to the Commander-in-Chief, Atlantic Command. In June 1966 Admiral Ince assumed command of the Naval Security Group Activity, Skaggs Island, California. Upon completion of this tour, he reported to the staff of the Chief of Naval Operations as Deputy Director of the Signals Exploitation and Security Division. This was followed by a tour as Deputy, and later Assistant Commander for Operations, Naval Security Group Command. His next assignment was Assistant Chief of Staff for Signals Exploitation, Staff Commander-in-Chief, U.S. Naval Forces Europe and Director Naval Security Group, Europe. Following this tour of duty Admiral Ince assumed the position of Assistant Deputy Director for Operations at the National Security Agency.

Admiral Ince was promoted to flag rank on July 1, 1976, and on May 29, 1977 became the first Deputy Director for Telecommunications and Computer Services at the National Security Agency. On August 30, 1978, Admiral Ince assumed command of the Naval Security Group Command, a position he held until September 26, 1980.

Admiral Ince held the following decorations: Legion of Merit, Air Medal with gold star, Joint Services Commendation Medal, Navy Commendation Medal with combat distinguishing device. In 1982 he was chosen by Ohio University to be a distinguished visiting professor and the first incumbent in a newly established chair of Communications Management. He developed and taught a new undergraduate curriculum on the subject. For the past few years the Admiral has been involved chiefly in volunteer work.

Rear Admiral Eugene St. Clair Ince, Jr. USN passed away peacefully in his sleep surrounded by his loving family on December 13, 2017, in Charlottesville, Virginia. He was born in Goshen, Indiana on October 18, 1926. He left home for the Navy at age 17, graduated from the United States Naval Academy in 1949 and received his Masters in International Relations from George Washington University in 1964. He served his country as a naval aviator in Korea and later joined the 7th Fleet as a cryptologist. He rose through the ranks of naval intelligence, serving as Deputy Director, National Security Agency, and retiring as Rear Admiral, Director of Naval Security Group Command in 1980.

In 1949, Admiral Ince married Jean Gregory of Oak Park, Illinois. The story of their engagement, “An Evening at the Waldorf,” was first published in Gourmet magazine in 1978 and has been widely republished. The couple raised five children as they moved from port to port, over three rewarding decades in the Navy. Upon retirement, they purchased a small farm in Madison County, Virginia and together created “St Clair,” a gracious and treasured home that served as the heart of the Ince family for 35 years.

In addition to serving his country with distinction, Admiral Ince was a scholar and gentleman. An avid student of literature, poetry, theatre, philosophy and history he distilled complex subjects with clarity and wit, and was a model of life-long learning, honor and integrity. Admiral Ince took great pride in his naval career, but was most proud of his 60-year marriage to his beloved Jean and the loving family they created. He was pre-deceased by his wife, Jean Gregory Ince; and his daughter, Julie Harwood Ince-Thompson of Belmont, Mass. (Tommy Thompson). He is survived by his son, John Hottel Ince, Barboursville, Va.; his daughters, Jaymie Ince Upton (Richard L.), Richmond, Va., Janet Helen Ince Glennie-Smith (Nicholas H.), Charlottesville, Va., and Ann Ince-McKillop, Washington, D.C., 13 grandchildren, and eight great grandchildren.

Sources:
Echoes of Our Past
dailyprogress.com