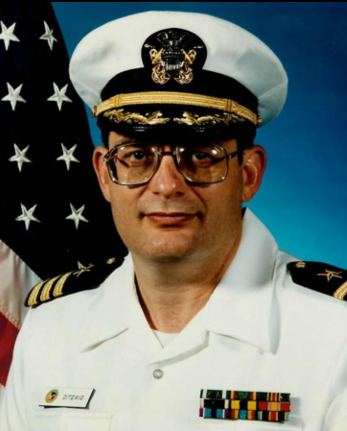 Bill Ditewig was born and raised in Peoria, Illinois, and spent high school and college studying for the Catholic priesthood. Following graduation from college in 1971 with a BA in Philosophy, Bill left the seminary and was about to be drafted. He joined the Navy, and began a twenty-two year journey in a remarkably different career. After boot camp at Great Lakes, he was assigned to study Hebrew at the Defense Language Institute East Coast, in Washington, DC, although classes were actually conducted in Rosslyn, VA at the State Department’s Foreign Service Institute. “C” school followed at Goodfellow AFB in San Angelo. From 1973-1974, CTI3 Ditewig served at the US Naval Facility, Nicosia, Cyprus.

Perhaps the single most important event during this tour was the Yom Kippur War. Following the war, political tensions in the region continued to increase, leading to the decision to close the facility. Petty Officer Ditewig was ordered to NSA for duty, but while on leave enroute to Ft. Meade, he found out he had been selected for OCS in Newport. ENS Ditewig was commissioned a special duty officer in cryptology and ordered to the Naval Security Group Department at the US Naval Communications Area Master Station on Guam. The Southeast Asia Tactical Information Communication Center (SEATICC) had been moved to Guam, including responsibility for direct support operations in the region. ENS Ditewig deployed to the Indian Ocean in the USS Long Beach (CGN-) and flew several missions with VQ. Later in the tour he became the Collections Division Officer.

Returning to language school in 1976 following this successful tour, LTJG Ditewig studied Russian for a year and then reported in 1977 to the Assistant Commander, Naval Security Group at Ft. Meade, for direct support duties in the Atlantic Fleet. He embarked as a cryptologic division officer in the USS Billfish, USS Sand Lance, USS Hammerhead, and USS Glenard P. Lipscomb. In between these patrols, LT Ditewig served as an NSA analyst. In 1980, he reported to the Director, Naval Security Group Pacific at the Commander-in-Chief Pacific Fleet in Makalapa, HI. For nearly four years, he served on the direct support staff, managing various programs operating throughout the Pacific Fleet. The remarkable leadership of the cryptologic staff during this time included CAPT (later RADM) Don McDowell, CAPT (later RADM) Charles Clark, and CAPT (later RADM) Jim McFarland.

From 1984-1987, LCDR Ditewig was the Operations Officer at NSGA Winter Harbor, ME, before returning to NSA. There, from 1987-1990, CDR Ditewig served first as the Director of the Navy and Marine Corps Personnel Office and then Director of Military Cryptologic Training. His final tour was as Executive Officer of the US Naval Security Group Activity, Hanza, Okinawa Prefecture, Japan. He retired on 1 September 1993.

Ditewig’s personal awards include the Navy and Marine Corps Expeditionary medal, two Humanitarian Service medals, two National Defense Service medals, three Navy Commendation medals, the Meritorious Service medal, and the Defense Meritorious Service medal. He also received an MA in Education, and another MA in Theology. Following retirement, he completed a Ph.D. in Theology from the Catholic University of America in Washington, DC. He had been ordained a Catholic Deacon while still on active duty and he has continued that service after retirement from the Navy.

Since retirement, Dr. Ditewig has served in a variety of ecclesiastical and academic roles, writing, teaching, and speaking extensively. He and his wife Diann have been married for 51 years, have four grown children, and fourteen grandchildren.