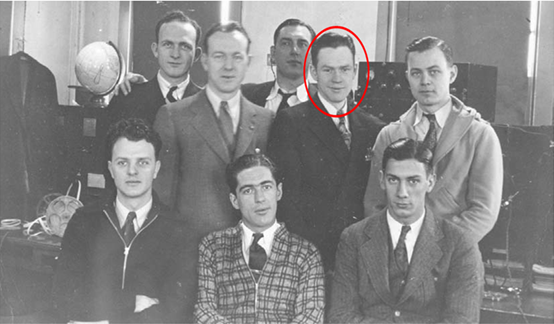 The opinions and conclusions expressed by Mr. Ralph Briggs do not reflect the official position of the Department of the Navy or any agency of the United States Government.

MR SCHMIDT: This is the Historian, Naval Security Group Command conducting an interview with Mr. Ralph T. Briggs, retired CWO4 United States Navy who is now employed by the Naval Intelligence Command.  Mr. Briggs was a Radio intercept operator assigned to the Naval Communication Station, Cheltenham, Maryland, from September 1941 to August 1942.  He states that he was present during the interception of the winds execute message.

MR. BRIGGS:  I’d like to insert into the record the record the following comments for the historical value which I feel they reveal.  I was one of the members of class #20 of the On-the-Roof Gang.

Much has been written about the events that preceded the Pearl Harbor attack with respect to our intercept operations.  Much is accurate, and yet a lot is speculation and assentation made by many who are not in a position to know otherwise remains accepted as the final version.  This is due, of course, in part to the prestigious position and ranks of the various individuals and authors who have contributed their personal accounts and achievements as part and parcel of the history of WW II communications Intelligence and our cryptologic contributions.

However, there are a lot who have purposely closed the book on certain chapters…. And some, I suspect, have done this due to their personal involvement in the revelations which if fully brought to light would serve only to discredit some of their assumptions and statements of fact.

Indeed, some actions and coverups seem to have been perpetrated when the Pearl Harbor hearings and inquiry zeroed in on some specific unanswered questions. And I think the winds code message and its execute is a case in point.

After considerable recollection over the years since December 7, 1941, I have finally reached the conclusion that I am the sole individual who initially intercepted and handled the winds code execute message tip-off.  At that time I had returned from a field and was assigned to Station M as one of Darryl Wigle’s Watch Supervisors.  In fact, I was his chief watch supervisor and a Kata Kana Instructor.

Pearly Phillips, one of my classmates, had the German Enigma side of the intercept operations.  But prior to my arrival at Station M, they had only been covering European and Latin American targets and special day to day intercept assignments.  In some random frequency searches I made I soon discovered we could intercept fully during optional frequency skip periods certain Orange Navy circuits so I suggested to Darryl we get 20-Gs concurrence to monitor some of these more lucrative targets.  This was done and we soon established excellent coverage in many desired Orange target circuits.

On watch on the evening of the mid on 4 December, Washington day time, I picked up on schedule the Orange weather BAMS broadcast circuit. At this point in time I don’t recall the exact frequency. I believe it was in the five digit megacycle band area, 13-15,000, somewhere in there.  Skip distance was in effect at the time and it precluded this being intercepted anywhere in the Far East. or Hawaii for that matter.  This by the way has been borne out by 20-Gs collating desk some months later.

Although we had been anticipating the tip-off code phrase for impending diplomatic break with Great Britain, that is the code phrase NISHI NO KAZE HARE–West Wind Clear– I soon discovered I had copied HIGASHI NO KAZEAME, which meant in Japanese East Wind Rain.  And also meant break between the United States and Japan.

A quick check of my classified watch supervisor’s instruction–notes we had on board at time, changed daily with current events, and were things we should know about from 20-G’s end– left no doubt in my mind that this probably was one of the three anticipated war warning code destruct messages to ministries and consulates as referenced later during the Hewlett Inquiry. Now in those days a select group of us– we were considered part of the original parcel of the 100 Orange intercept operators–were privy to certain day-to-day significant developments in the communications intelligence and cryptoanalysis field.  Thus, a few of us were informed in advance of the significance and meaning of this tip-off information as contained in the J-19 code sent out previously by the Japanese Foreign Office about mid-November 1941.  This had been translated about the later part of November 1941, and these instructions were not transmitted within the Purple Code as many alluded to, but through the other diplomatic and weather broadcasts transmitted in both Japanese plain language and Morse code.