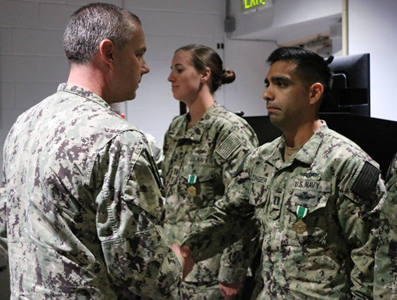 Hilzinger was out for a run in January when he was asked to help find a missing person in Chula Vista, California. Hilzinger found the veteran, who was convulsing in a locked vehicle. After extricating the vet, he immediately began providing cardiopulmonary resuscitation and other first aid at the scene.

Hilzinger tended to the veteran for 45 minutes before first responders arrived, The Navy says his efforts saved the veteran’s life. In March, he was awarded the Navy and Marine Corps Commendation Medal for non-combat heroism, the Navy announced Thursday.

“When I was initially briefed on this incident, I was not shocked that Lt. Hilzinger would do something like this,” said Cmdr. Tim Raymie, commanding officer of IWTC San Diego, in a Navy news release. “He has always placed others before himself and, as this incident clearly shows, this extends to fellow citizens who do not wear the uniform.

“In life we say many things are ‘meant to be,’ and it was meant to be that Jon was in the right location at the right time, to not only save the life of this veteran, but also to save the family from losing a loving husband and father,” he said. “Words can’t truly express how proud I am of Jon.”

Thank you Micala Rider for sharing this story!