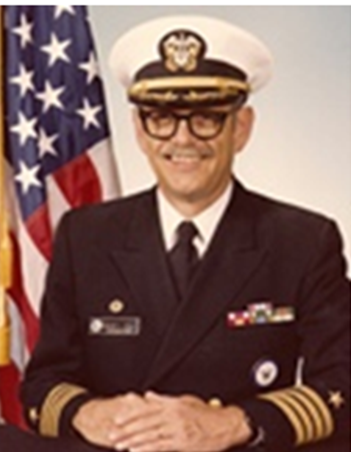 Born in Concord, NH, Captain Gill earned a Bachelor of Arts degree from Bowdoin College, Brunswick, ME, in 1959. He entered the Naval Reserve and was commissioned via Officer Candidate School (OCS) in February 1960.

After SONAR training, Captain Gill reported to his first permanent duty station, Naval Facility, Cape May, NJ, where he served initially as an Oceanographic Research Watch Officer and later as the Communications Officer.  From January 1962 to January 1963, he was the Operations Officer at Naval Facility, Grand Turks, B.W.I., which included sustained duty during the Cuban Missile Crisis. Captain Gill then commenced a three-year NATO assignment with the International Signal Support Group at Headquarters, Commander in Chief Allied Forces Southern Europe, Maples, Italy.  Following Communications School, he reported in April 1966 as the Staff Communications Officer, Commander Naval Air Force, U.S. Pacific Fleet.  During this tour, Captain Gill was selected as a Cryptologic Specialist Duty Officer (1610).

In August 1968 he entered the Naval Post Graduate School, Monterey, CA., and graduated with honors with a Master of Science degree in computer systems management in 1970.

Captain Gill reported in September 1970 to the Naval Security Group Activity (NSGA), Kamiseya, Japan, where he served as the Data Processing Officer. In June 1971 he was ordered to the NSGA, Misawa, Japan, where he assumed the position of Assistant Operations Officer. In October 1973 Captain Gill was ordered to the Staff of Commander in Chief, U.S. Pacific Fleet, where he was assigned as the Cryptologic Direct Support Officer and also served as the Cryptologic Operations officer.  In January 1979, upon his assignment to the National Security Agency, Fort George Meade, MD., Captain Gill performed duties as the Chief, Operations Staff, Naval Division and subsequently as the Executive Assistant to Chief, A Group. Captain Gill assumed command of the NSGA, Fort George G. Meade, MD., in January 1983. Following his command tour at Fort Meade, he assumed command of NTTC Corry Station in November 1984.

After Captain retired from the Navy, he worked as a Senior Staff Member for TechSoft, Technical Software Services, Inc. in Pensacola, retiring in 2005.

Captain Gill was the son of the late Dr. MacLean John and Marie Florence Chaloner Gill and the husband of Judith “Julie” Strong Gill. They were married 52 years.