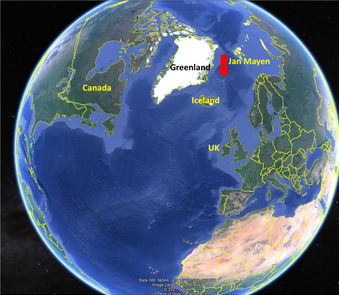 The U.S. Naval Supplementary Radio Station, Jan Mayen Island, was established in November 1943, for the purpose of obtaining data on German clandestine weather stations operating in northeastern Greenland.  Its mission terminated with V-E Day, and on 1 July 1945, the high frequency direction finding (HFDF) equipment was dismantled ending OP-20-G’s involvement with the Jan Mayen Island although U.S. Coast Guard personnel remained on the island until at least January 1946.

On September 19, 1943, the Commander, Greenland Patrol (COMGREPAT), stated Army aerial reconnaissance of northeast Greenland was being discontinued due to doubtful value and winter storms.  Indications were that more German weather stations had been or were being established in the region, and the best means of detecting enemy active in northeast Greenland was by an HFDF station on Jan Mayen Island. A suitable site was identified near a weather station administered by a Norwegian Naval officer under the British Admiral in Iceland.  Authorization to proceed with the establishment of the station was requested and favorably endorsed by the Commander-in-Chief, U.S. Atlantic Fleet (CINCLANTFLT).

On September 30, COMGREPAT forwarded a message to the Vice Chief of Naval (VCNO) Operations reporting information, which further indicated the probability of continued German attempts to locate clandestine weather stations in northeastern Greenland.  Authorization to establish an HFDF station on Jan Mayen Island was again requested.  However, the Commander-in-Chief, U.S. Fleet (COMINCH), immediately responded that, due to the scarcity of materials, it was not considered that the establishment of the Jan Mayen station was warranted.

An October 2, 1943 OP-20-G memorandum to OP-20 stated the location of Jan Mayen Island was such that it would not be important to have it in the Atlantic Strategic HFDF Net since Allied HFDF stations already existed on Greenland, Iceland, and  in the British Isles.  Ionospheric conditions in the area also caused frequent radio blackouts affecting both communications and line of bearings. The OP-20-G position was that the establishment of an HFDF station on Jan Mayen Island was not desirable.  It was considered that results against German weather stations in Greenland could be obtained from existing HFDF stations at Kodiak and Sitka, Alaska, and Greenland.

As originally conceived, the Jan Mayen task unit was to consist of one officer and six enlisted personnel.  HFDF equipment was to be obtained from the United Kingdom while other supplies and equipment would be furnished by the Naval Operating Base, Iceland (NOBI) and COMGREPAT. Daily watches of six to eight hours duration were considered adequate to perform the mission.  Upon the conclusion of conferences with officers from NOBI, COMGREPAT, and USCG Cutter NORTHLAND, LTJG Arne Pederson, USCG, departed for CONUS on or about October 4, only to learn upon his arrival that all plans had been cancelled.

In an October 15 memorandum from OP-20-GF to OP-20-G, LCDR B. F. Roeder reiterated the negative factors regarding Jan Mayen Island as a site for an HFDF station.  The location of the island and the effect of ionospheric conditions on communications made it doubtful if a station would make other than a minimal contribution to the North American Strategic HFDF net.