Who Designed the UN Logo? 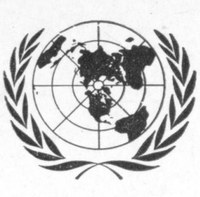 In 1945, the US State Department asked the OSS to help create graphics for the UN Conference on International Organization in San Francisco, where the UN Charter was drafted. Lundquist’s team set out to create a lapel pin for the delegates that could serve as their official form of identification. It was initially designed by another OSS officer, Donal McLaughlin, who worked for Lundquist as the director of graphics for the conference. This became the prototype for the UN logo you see today.

The design consisted of a top-down view of the globe, centered on North America and showing all of the continents except Antarctica, with two olive branches on either side to symbolize peace. The design was in shades of blue, a purposeful choice to contrast with red, a color traditionally associated with war.

The final emblem chosen by the UN was a slightly modified version of this design.

After his OSS service, Lundquist joined a private practice as an architect, working on hospitals, schools, private residences, and even the former Kodak Building in Manhattan. In 2008, Lundquist passed away at the age of 92.

The UN logo isn’t the only design of Lundquist’s around today. He also created one of the most recognizable product packages still found on store shelves: the blue-and-white Q-Tip box.

The prototype UN emblem shown in the feature image.

One thought on “Who Designed the UN Logo?”