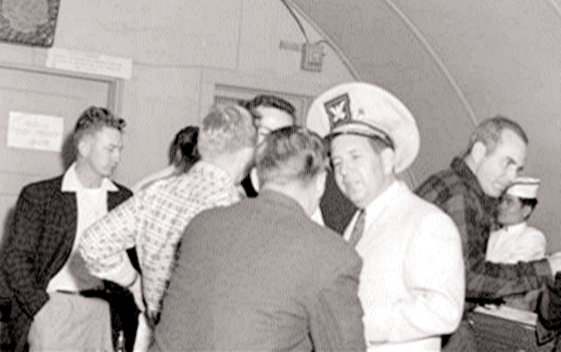 The Hard Way to Level the Ground

My first task was to level the ground, which required use of a bulldozer. The Post Engineers wanted us to pay them stateside commercial rates for an equipment operator. Well, we operated on a shoestring budget so we went to the Navy at Naha and talked them into loaning us a D-7 dozer, telling them I was qualified to operate it. Hell, I never even sat in the driver’s seat until I had to unload it at our site. Everything was going fine as I was pushing a lot of the dirt into a big hole containing water.

Suddenly, as I pushed a load of dirt over the water hole, the entire unit sank right up to the top of the tread. Therefore, I went to the Air Force, bummed a large D-8, and began the task of getting the D-7 out of the mud. Well that one also sunk into the mud and I finally had to get a D-6 from the Army and a 2 ½ ton, four wheel truck from Post Engineers. If my memory is correct, it took me about three weeks to get this mess resolved.  Once the ground was level, we began installing the copper ground plane. As fast as we would lay it out, the Okinawans would roll it up and steal it each night. Moon Mullins, one of my co-workers, reached the point he was ready to shoot the thief on sight. Instead, I had a meeting with the local village elders and promised all extra wire would be given to them if they would help protect it until we had our ground plane laid out and covered. We had no more problems.

About this time both Mullins and I had a desire for pizza, which was non-existent on the island. Therefore, I had a talk with our Officer in Charge (OIC) Nelson W. Craw after getting approval from Pete Eargle, our head cook. He would grant us permission to use the galley providing we could get all the necessary ingredients. LCDR Craw agreed provided he was invited, which of course was a given. As we began arranging for delivery of all the necessary items, others suggested it would be nice if we could include beer and wine. Again, LCDR Craw agreed as I promised I would accept responsibility for the conduct of the men. Naturally, as we arranged for delivery of the necessary ingredients, the providers of these items were also invited to the party. The day we had the pizza party, Mullins and I started making pizzas shortly after the noon meal. As the evening progressed, we had the island Army and Air Force generals as guests of our OIC. Whenever we began to run out of a specific item, suddenly, more would show up. We had wives of not only our own personnel but also from other units attending this party. We could only seat about forty in the dining area so many moved out into the parking lot sitting on car fenders etc.  Finally, both Mullins and I had to stop making pizzas about mid-night as we were damn tired and others quickly took over.  This was the talk of the island for a few weeks.

In 1956, headquarters decided to expand our mission on the island. This required expanding our antenna facilities and when we submitted our request for funds to construct a couple of rhombic antennas, we received only $10,000. LCDR Craw was upset so I suggested I make a few calls. Since I had spent much off duty time at other units, servicing their crypto equipment, getting the desired material out of the salvage yards allowed me to assemble all the necessary material. Unfortunately, I had borrowed a pole auger from Post Engineers and tore it up drilling into the coral ground. CWO Claude Sowada, my new material officer, suggested I use shaped charges to blast the holes for our antenna poles. There were three demolition teams on the island and all were busy full time with all the unexploded ordnance routinely being discovered. When I went to the Army, they turned me down. Therefore, I sat down with Sowada since he had been stationed at Indianhead Maryland where all of them trained. I got some information on a number of the instructors there from Sowada, then went to the Air Force, and implied as part of a bull session, that I had been through the course at one time. When I finally got around to asking them for a number of shaped charges, primer cord and fuses, they suggested that I do it, as they were too busy. I quickly picked up the necessary material, had a ball blasting holes and dropping a telephone pole in, and moving to the next spot. At the Operations Building, I was finishing up with the last one when LCDR Craw came out to watch. When I pulled the fuse and told him, we needed to move he wanted to know where the EOD personnel were. I told him I was it and insisted he run as this one was going off in a few more seconds. Once he got control of himself after the big blast, he told me I was grounded, again. I was routinely grounded or restricted to barracks compound by LCDR Craw during these busy times.

The antennas we CTs built were the only ones that stood up to Typhoon Emma later. By this time, I was on the list to make chief and my enlistment was about to expire. Both the Army and Air Force went out of their way to recruit me into their service and LCDR Craw did nothing to preclude me jumping ship.  Finally, the day arrived when I either had to re-enlist or do whatever I decided. All LCDR Craw did was place in front of me a set of flight orders on a SA-16 flying to Hong Kong, leave papers for ten days, and an enlistment contract. While in Hong Kong, I had a special CDR’s hat made up since LCDR Craw was scheduled for promotion to full CDR. The hat had a crown 36 inches in diameter. Instead of gold braid on the visor were two fried eggs and in place of the officer’s shield a rooster. In addition, since I was to be in charge of planning the next initiation after mine, I had four nine-foot long, black ties made.  Between both these items, I had quite a bit of difficulty convincing the tailor I was, in fact, sane.