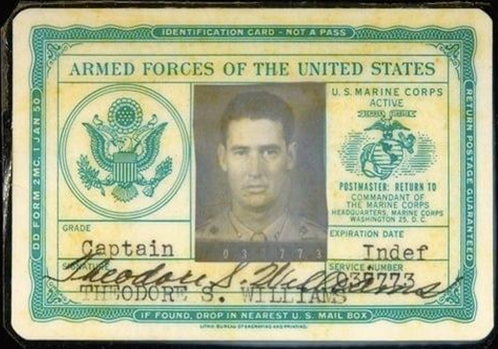 Ted Williams was an American professional baseball player and manager. He played his entire 19-year Major League Baseball (MLB) career, primarily as a left fielder for the Boston Red Sox from 1939 to 1960; his career was interrupted by military service during World War II and the Korean War. Nicknamed “Teddy Ballgame”, “The Kid”, “The Splendid Splinter”, and “The Thumper”, Williams is regarded as one of the greatest hitters in baseball history.

Williams was a nineteen-time All-Star, a two-time recipient of the American League (AL) Most Valuable Player Award, a six-time AL batting champion, and a two-time Triple Crown winner. He finished his playing career with a .344 batting average, 521 home runs, and a .482 on-base percentage, the highest of all time. His career batting average is the highest of any MLB player whose career was played primarily in the live-ball era, and ranks tied for 7th all-time (with Billy Hamilton).

Born and raised in San Diego, Williams played baseball throughout his youth. After joining the Red Sox in 1939, he immediately emerged as one of the sport’s best hitters. In 1941, Williams posted a .406 batting average; he is the last MLB player to bat over .400 in a season. He followed this up by winning his first Triple Crown in 1942. Williams was required to interrupt his baseball career in 1943 to serve three years in the United States Navy and Marine Corps during World War II. Upon returning to MLB in 1946, Williams won his first AL MVP Award and played in his only World Series. In 1947, he won his second Triple Crown. Williams was returned to active military duty for portions of the 1952 and 1953 seasons to serve as a Marine combat aviator in the Korean War. In 1957 and 1958 at the ages of 39 and 40, respectively, he was the AL batting champion for the fifth and sixth time.

Williams retired from playing in 1960. He was inducted into the Baseball Hall of Fame in 1966, in his first year of eligibility.  Williams managed the Washington Senators/Texas Rangers franchise from 1969 to 1972. An avid sport fisherman, he hosted a television program about fishing, and was inducted into the IGFA Fishing Hall of Fame. Williams’s involvement in the Jimmy Fund helped raise millions in dollars for cancer care and research. In 1991 President George H. W. Bush presented Williams with the Presidential Medal of Freedom, the highest civilian award bestowed by the United States government. He was selected for the Major League Baseball All-Time Team in 1997 and the Major League Baseball All-Century Team in 1999.