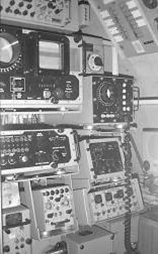 May 1972 proved to be the most active month of the air war over Vietnam for the entire war, and CHICAGO was charged as the maintainer of the Positive Identification Advisory Zone (PIRAZ), primarily tasked with maintaining the identity and track of all the air traffic over the industrial heart of North Vietnam and the adjoining coast.

PIRAZ sorts out what aircraft are where, why they were there, what and how they were doing, and why.  This was true of both the good and bad guys.  Our call-sign was “Red Crown,” and you cannot read any real history of the air war in Vietnam without seeing numerous references to “Red Crown.”  As the embarked direct support SIGINT team my guys and I were very, very busy providing the location and status of the bad guys to the air intercept controllers, in as near to real time as possible for a minute in an air battle can literally be several lifetimes.  This was especially critical to the MiGs flying below the radar coverage.  We had several ways to detect and track them that I am still not allowed to go into here.

One of the first things I did that first morning after we had moved away from Haiphong was to ask the CO if I could move my combat station from SupRad to CIC anytime we had significant hostile activity.  The team in CIC was very busy, but the guys in SupRad needed better insight into the tactical picture.  By putting me in CIC I could both have immediate access to the electronic intelligence (ELINT) being generated at the WLR-1 (featured image), a highly sensitive passive receiver, position there in CIC, and which I thoroughly understood both from my previous experience off of Vietnam on HORNE and the fact that ELINT was a significant part of my training for submarine duty.  This would allow me to be the fuser of the ELINT with the COMINT being generated in SupRad to create true signals intelligence (SIGINT).  Stationed in CIC I could also be the two-way relay between CIC and SupRad, which would significantly shortened our analysis and reporting timeline, to as near-real time as possible, thereby producing a much more tactically useful input, especially to the air battle over North Vietnam.  The Captain was delighted to have me take on that role, one he had been doing up to that time.  He immediately picked up the phone and had the chief in charge of interior (within the ship) communications systems install a new, dedicated sound powered phone circuit between CIC and SupRad with the handset being exactly where I requested it between his seat in CIC and the air intercept controllers (AICs), the radar operators actually talking to the fighters pilots over Vietnam.  The captain still had his line to SupRad but I was now much closer to the AICs as well as I also now had ready access to the WLR-1 position, with its ELINT output.  Perfect.  Right where I needed to be when things got hot.

During my previous tour in Vietnam in 1968 on HORNE, I had seen the NavSecGru officer come into CIC and man a sound powered phone on a long cord to SupRad which was just behind CIC every time there was any action.  I was not cleared for precisely what he was doing, but I was sure we were eavesdropping on the North Vietnamese air control system, its pilots, and controllers, just like we, the British, the Germans and the Japanese all did in World War II.  Why that was such a big secret remains a mystery to me to this day.  Exactly how good we were at bringing in all the information available in the electromagnetic spectrum was, and still is, a closely guarded secret, and well it should be.   But open, clear voice?  Give me a break!  If we were not doing it, people should be court-martialed for dereliction of duty.  It is the obvious thing to do.  Time is the most critical element in combat and this is especially true in jet air combat where timelines are very compressed due to the speeds involved.  I needed to be where I could get all the pertinent information, fuse it, and provide to the one person who needed it most, the Air Intercept Controller as soon as possible.  That new circuit allowed me to do that.

Additionally, having spent five months in CIC on HORNE off Vietnam I was very familiar with the radars, communications and the active electronic warfare (EW) systems, our active jammer suite as well as the WLR-I, and.  On CHICAGO there was no one man trying to coordinate everything including all radars, Navy Tactical Data System (NTDS) reporting, and EW besides the CO, the Operations Officer, and the weapons coordinator.  They all had a lot of other things on their mind other than the passive electromagnetic spectrum (SIGINT) and what it was telling us.  From my time in CIC on HORNE, I believed the EW side of things (ELINT) was being short-changed, and I saw the same problem here.  The ELINT operator or his supervisor had to get someone’s attention to report anything, and then it was verbal.  There was a lot of peripheral information to be gleaned from it that was not being fully fused into the calculation as to what is happening. To make matters worse, from SupRad we did not know when the coordination team was very busy (as was usual during hostile activity) or could be interrupted to report information of widely varying timeliness requirements.  Also, the AICs were the guys that really needed the information as soon as possible, and by going through the coordinator or the CO or any other officer, a time lapse and filters were introduced.   So when I asked the CO if I could take on that role during any time we had planes over the beach he was delighted.  I would be on a dedicated circuit to SupRad and could pass information to and from it to be sure all in both placed, CIC and SupRad, had all the pertinent information available.

It took the Interior Communications Technician less than an hour to set it up the day I requested it, and it was not a day too soon.  Indeed, this proved to be provident timing.  Events the very next day clearly showed my being in CIC significantly smoothed the timeline from signals intelligence collection, both COMINT and ELINT, to processing, to it being presented to the man that needed it most in a manner that was easy to understand and digest.  So much activity happened on 10 May that it got so all I needed to do was lean over an AIC’s shoulder and put my finger over a place on his scope and hold up 1, 2 or 4 fingers, indicating how many MiGs we thought were there. And, by dragging my finger in the believed direction of travel, he also got a good idea as to where to look for hostiles appearing on his scope.  He might look up and say “Type?” If I knew it, I would report in a single word.  “17”, “19” (rare) or “21”.   We also used a color code of Red, Blue and Yellow. Me being in CIC also greatly assisted in the fusion of all sensors, including that gleaned from our electronic warfare suite.

I remember we had subsequent MiG activity on 9 May, but I don’t remember it was an exceptionally productive afternoon.  All the excitement that day happened in the AM.  We might have directed an Air Force and/or Navy plane into potential intercept(s), but the next day was so memorable that the afternoon of 9 May just fades.  10 May started with the Navy sending four F-4s in a preliminary sweep into the north.  Right behind them was a three carrier “Alpha Strike,” over 100 airplanes.

Often in jungle areas, there are humid nights, hot days and lots of dew.  As the sun rises, its rays heat the very damp jungle canopy causing steam to rise.  As the steam rises to a certain altitude it cools and condenses back into moisture, forming a dense, electronically impenetrable ceiling above the jungle.  This phenomenon acts as a waveguide that takes a signal generated on or near the ground and bounces it along its path for many miles in all directions.  So it was both 9 May, which is why we had such early warning on the MiGs launched against the miners, and again on 10 May.   As the first four Navy fighters approached the shore of North Vietnam we could hear two MiGs taxing and preparing to take off at Kep airbase which is near the shore. I passed the information to the AIC that “there are two MiGs active on the deck at Kep” and he misunderstood me and relayed the info to the F-4s that there were two MiGs airborne near Kep and ordered them to intercept them even though the MiGs were below our radar horizon.  I had meant “On deck” in the baseball sense of getting ready for action. The F-4s arrived overhead Kep looking for the two MiGs they thought were airborne in time to see my two MiGs taking off and dived to engage.  They were able to shoot one of them down immediately.   They chased the other MiG literally through the treetops until the two Phantoms ran out of missiles to shoot at it, and some of his fellow MiG pilots came to his aid and attacked the F-4s, which went to afterburner and streaked for the Gulf of Tonkin and safety.  That 2nd MiG pilot was no fool, and he must have known that if he stayed right at treetop level and kept turning no one was going to get a clean shot at him.

Later in the day I would literally lean over the radar screen of the air intercept controller and pointed to where we thought there were MiGs airborne heading to intercept our guys.  I passed similar information many more times that day and over the next 6 weeks.  My team also generally knew their initial course, if not their specific direction, but even today, many years later I am reluctant to say how we did it. Some of this information came from the vectors given the MiGs to fly by their controllers, others from other sources.  Just that we did, and it proved very, very useful that day and for the rest of my 6+ weeks on CHICAGO.  By the time 10 May was over we had counted 41 individual MiG pilots active.  Some of the MiG pilots had flown their mission, returned to base, refueled and went up again.  My team and I had provided early warning to both Navy and Air Force F-4s directing them into or warning them of multiple engagements, including both of the lead elements of the USN and USAF initial strikes.   The US had over 335 aircraft airborne that day and at the height of the air battles that morning and early afternoon at times the radar screens looked like someone had spilled a shaker of salt over them as there were so many white dots, which represented the various aircraft, you could not count them.  Our team kept inputting welcome information to the AIC, but there was so much of it at the height of the battles that day that it was hard to stay totally current or coherent!.