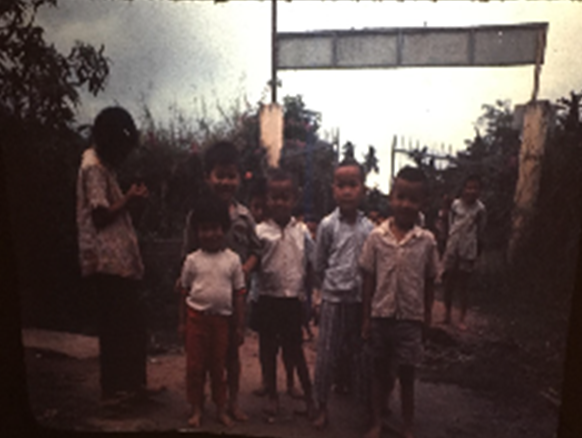 The next day I received my new orders to Naval Support Activity Detachment Dong Tam on the My Tho River about 50 miles southwest of Saigon.  I would spend a month in Dong Tam monitoring the mobile riverine forces, including Seal Team assets, that staged from the boat basin just off the river.

We drove to Dong Tam in a van on Route 1A and I got a chance to see the countryside up close as we drove into the Mekong Delta, passing vast rice paddies on either side of the road.  As we traveled along, I noticed occasional South Vietnamese regional forces outposts, some fortified and others not, and I thought about how difficult it must be to prevent VC infiltration in such terrain.  At times, the road passed very close to farmers wearing their traditional conical straw hats working in the rice paddies.  I remember the Vietnamese zipping by us on their motorcycles as we made our way to the town of My Tho, the provincial capital on the banks of the river bearing its name.  We stopped briefly to deliver some mail to the liaison officer at the South Vietnamese Navy base, before completing our trip to Dong Tam.

I quickly learned why “dismal” was the adjective used to describe Dong Tam.  During my month stay the skies seemed almost perpetually overcast.  Despite my supervisor’s best attempts to get me to bunk on the APL-30, a barracks ship docked in the boat basin at Dong Tam, I took one look at the bunk rooms where the beds were stacked five or six high and said no thanks.  The thing looked like a serious accident waiting to happen.  As we were discussing the situation in the command bunker where our monitoring position was located, I was offered a bunk in the SEAL Team hooch nearby.  I thanked the SEAL sailor, secure in the knowledge that I wouldn’t drown in my sleep just weeks away from the end of my Vietnam tour.  A couple of times while I was in Dong Tam the base did receive some mortar fire from the VC in the vicinity, usually just a couple of rounds, enough to get everyone dashing for the bunkers.  I was convinced that the barracks ship was a juicy target.

Like a twice a year Christian, I suddenly felt more religious at Dong Tam, probably the result of the charismatic chaplain who spoke to me one day as I was coming out of the chow hall.  He was a giant of a man and looked a bit like John Wayne.  I had heard a piano playing in the small chapel as I passed a day earlier and couldn’t resist sticking my head in the door.  The chaplain was practicing a hymn, but stopped and asked if he could help me.  I said that I hadn’t heard a piano playing in a long time and just enjoyed the sound.   After I told him that I played a little, he encouraged me to sit down and play something.  I believe I played something totally inappropriate like boogie woogie and he just laughed.  Before I could leave, he had talked me into joining him and a few others for an upcoming visit to an orphanage for Amerasian children in the local area.  The kids were the offspring of GI fathers and Vietnamese mothers and faced grim futures in their country.  Our visit was special.  The children were very friendly, and I remember that they had a cute white fuzzy dog.  The chaplain had brought some candy and fruit for the kids and we had fun playing with them.  I often wonder about their fate.

My time in Dong Tam passed slowly and the reduced tempo of operations made the long watches seem to drag on forever.  About two weeks into my stay, the chief in the command center needed someone with a security clearance to accompany a truck up to MACV headquarters in Saigon to pick up some parts for their radio transmitter.  I was also told that MACV was holding some mail for our team members, so I volunteered to make the trip one afternoon.  The trip up the road to Saigon was uneventful and it was liberating to be able to leave the base.  We were on a fairly tight schedule and were cautioned not to fool around in Saigon because the roads in the Delta were unsafe to travel after dusk.  It was late afternoon as the driver and I left the MACV compound and made our way through the southern suburb of Cholon.  We became aware of a motorcycle that seemed to be following us as we drove down the wide avenue.  The person on the cycle appeared to be a Vietnamese officer, but he was acting suspicious – swerving and beeping his horn at us.  He pulled up alongside us and I made sure that he saw the M-16 that I was holding.  It appeared that the cyclist was trying to get us to stop, but the driver and I both wanted no part of that.  After another few seconds the driver swerved slightly, and we heard a slight thump.  As I looked in the passenger side mirror, I saw the motorcycle sliding along the pavement and the cyclist going head over heels.  In a perfect world not in a war zone, we might have stopped, but in the late afternoon in the suburbs of Saigon we kept on truckin’, slightly unnerved but racing for Dong Tam before the sun could set.  We made it to the base just before dusk and reported our incident to the chief, who said we did the safe thing by not pulling over.  In the special logic that applies in hostile areas, his words made sense.

In late November I returned to Cam Ranh Bay and enjoyed my status as a true “short timer”.   Senior Chief Nicholas was not happy to see me and I did my best to avoid him, but I insisted on participating in one of the rituals accorded to most short timers.   There was a glass enclosed bulletin board on the quarterdeck entrance, and it was customary for those with printed orders out of Vietnam to display a copy of those orders in the glass case.  When I began putting a copy of my orders on the bulletin board there was not a lock on the glass door.  While two other fellows’ orders remained on display, mine kept disappearing.  I attached a small notice to the next copy that I put on the board and it read “I have 50 copies of these orders and 5 days left in Vietnam!”  The senior chief had one of his flunkies tell me that I was not allowed to put my orders in the case any longer, and to make certain that I complied there was a lock put on it. I’ve always loved a good challenge and during my mid-watch I was able to maneuver another copy of my orders under the glass covering.   That was the last straw for RMCS Nicholas, who had me summoned from my bunk still sleepy from my mid-watch.  He gave me a direct order not to put any more copies of my orders on “his” bulletin board.  I obediently said I would comply, satisfied in the knowledge that I had really pissed him off.

Two days before my 2 December 1970 “freedom bird” flight from Cam Ranh Bay to Seattle, WA where I would be honorably discharged, an awards ceremony was conducted for several departing members of the Naval Communications Station.  Among the awards presented by CDR W. J. Longhi, the CO, was my “Good Conduct Award” for four years of “faithful, zealous and obedient naval service” completed on 2 October 1970.  I also received a letter of appreciation that stated in part “Be it known that he has served honorably and well; and through his loyalty, dedication, courage and selflessness he has answered the call of free men everywhere at this time of crisis.”  The senior chief was unable to make the ceremony – probably too busy scaring seagulls.

As I reflect on my year in Vietnam, I realize that it was the most exciting adventure of my life, not a view shared I am sure by those that actually faced combat.  My tools were the typewriter, radio receiver and headset, and like my fellow CT’s before and after, part of a proud tradition and satisfied in the knowledge that our mission over the years may just have saved a few lives.