‘You Were Most Deceitful’ Part Three of Four 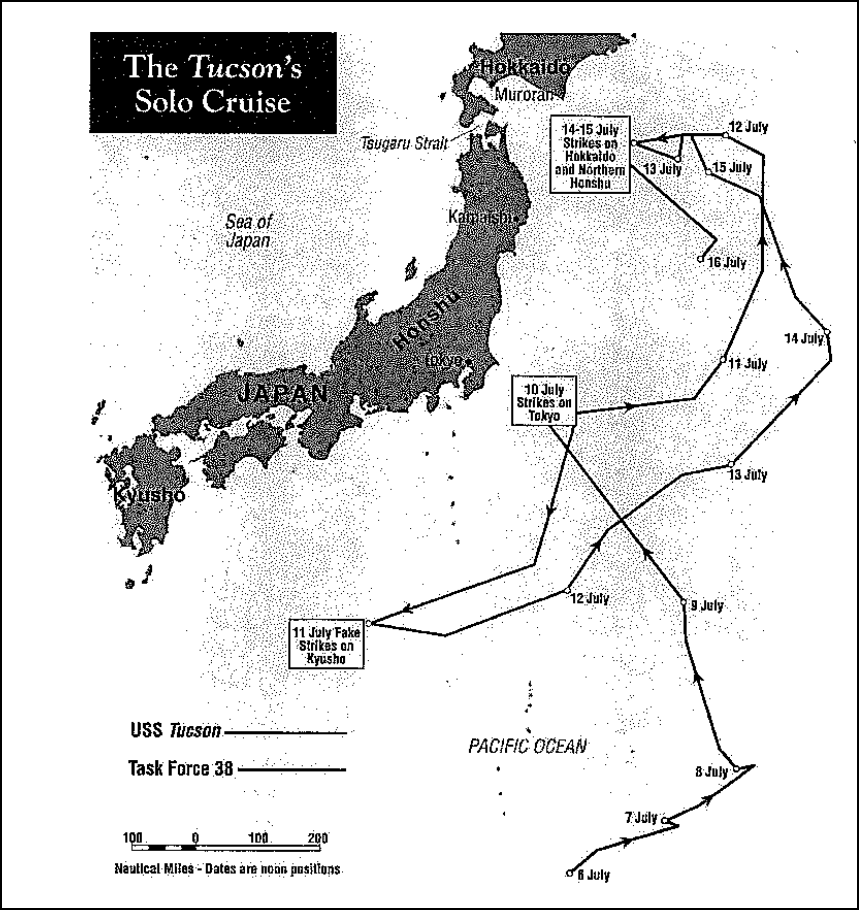 Several hours after separating from TF 38, at 1700, the deception began when the “Missouri,” still steaming southward, broke the silence by sending the first of several urgent messages.

The transmissions were classified as urgent in order not to raise Japanese suspicions about breaking the preattack radio silence.  This message was to alert the Pacific Fleet’s advanced headquarters on Guam that the flagship had experienced a teletype breakdown and was shifting to manual-keying (Mode code) communications.  Receipt confirmation of the feigned equipment casualty report, however, was delayed for three hours due to numerous communications problems, including exceptionally heavy Japanese jamming on the frequencies used.  Also, there was continuing interference from all sign “NUBO,” later identified as a U.S. submarine.  At the first manual keying between Booth’s men and Guam was finally accepted.

After this initial dispatch was cleared, Tucson resumed radio silence as if attempting to cover her night movement.  According to Booth, the cruiser again broke the silence “on schedule at 0127 on 11 July, with the transmission of two more urgent dispatches.  This was done because we wanted to furnish the enemy a running direction finding track throughout the night.”

By that time, a second part of the deception was already underway: the mimicking of normal communications between Task Force 38’s carriers and aircraft.  The four Tucson officers attached to the Dirty Tricks Department – Lieutenant Johnson, combat information center (CIC) officer; Lieutenant Lillywhite, fighter director officer; Lieutenant (junior grade) McCulley, ship’s radio officer; and Ensign Graft, the CIC watch officer – played key roles.  They were station with radio-control units in separate spaces in the ship: the CIC forward and aft controls, the chart room, and the radio transmitting room.  From these different locations, the conversations between the “carriers” and their “planes” took place between 2100 on 10 July and 1800 on the 11th.  Separating the “talkers” in spaces with different background noises was essential in order to effectively fake the sound of real transmissions, and the hoaxers used scripts to attain the proper sequence, timing, and content of the conversations.

Reporting on this elaborate aspect of the deception, Lieutenant Booth later wrote:

Peak transmission periods were at 2100-2300 … 10 July, and 0500-1200 … 11 July, with interim transmission being made spasmodically.  The evening script was concerned chiefly with the stationing of pickets and reporting on same, the assignment of ready deck and VFN [night fighter squadron] duty, radio checks, bogey reports and station keeping.  During the time from 2300 … 10 July to 0500 … 11 July, transmissions were at a bare minimum in accordance with the normal strike day, mid-watch appearance of the Force IFD [inter-fighter director] circuit. Radio check and contacts with pickets comprised the major portion of traffic in this period.  During the peak morning period (0500-1200 … 11 July) transmission dealt mainly with the launching and recovery of three air strikes, bogey contacts, weather reports, position, and radio checks … The afternoon of July 11 was devoted to radio check, bogey contacts, position reports, and routine messages.

A glitch in the operation, however, was that Booth’s team was not given the exact time of the Kyushu air attacks.  According to the lieutenant, with that information his unit could have coordinated “the deceptive transmissions with the actual arrival of planes over the target area and return to bases” and thus created a “much more realistic picture.”

When the Tucson tricksters faked the recovery of the planes, the cruiser was some 570 miles south of the actual task force and directly east of Kyushu.  The ship’s crew was near exhaustion from remaining at heightened general quarters.   According to Booth, “from the beginning of the operation to the end, neither my crew, nor I, got a wink of sleep for 50 or more hours.”  The cruiser’s luck had held out during her southward cruise.  Sonar and radar contacts were recorded in the deck log, but the lone ship was not attacked.  The Tucson now headed northward to reunite with FT 38.