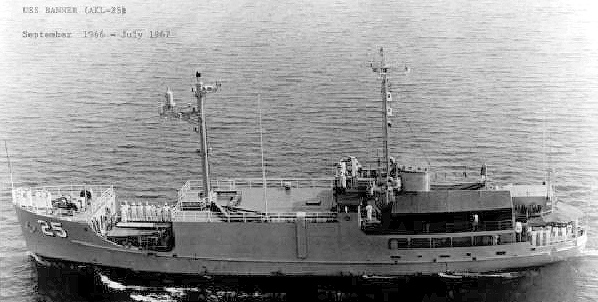 During ten of the missions, USS Banner was the target of Soviet and Chinese Communist harassment.  The hostile actions included shouldering, closing to short range and maneuvering dangerously, one minor collision, closing with guns trained on Banner, surrounding the ship with trawlers, and signaling “Heave to or I will open fire.”  In two of the instances, Commander Naval Forces, Japan (COMNAVFORJAP) directed Banner to move to another area, and in two other incidents involving Chinese harassment, destroyer or destroyer escort assistance was dispatched from the Taiwan Defense Patrol.

In 1967, the commanding officer of Banner, CDR Charles R. Clark, perceived no threat from the Soviets because they had many surveillance ships operating and would have much to lose by seizing his ship.  “The North Koreans and the Red Chinese were a very doubtful factor, because nobody knew what they would do, but the fact that we were in international waters, conducting legal operations, was our greatest protection.

Banner’s operations had accomplished the following objectives in support of the operational concept of the CLICK BEETLE program:

(1) Intelligence had been collected in fulfillment of high-priority national intelligence objectives;
(2) Soviet reaction to a small overt naval surveillance ship deployed  in Soviet naval operating areas had been determined;
(3) The effectiveness of a small ship acting independently and primarily as a naval surveillance and intelligence collection unit had been tested;
(4) SIGINT signals that were not intercepted in sufficient depth by other mobile or shore facilities to allow adequate exploitation had been collected;
(5) Photographic, acoustic, hydrographic, and other intelligence material on targets of opportunity had been collected; and
(6) Any intercepted information of “CRITIC” or “Spot Report” nature had been reported.