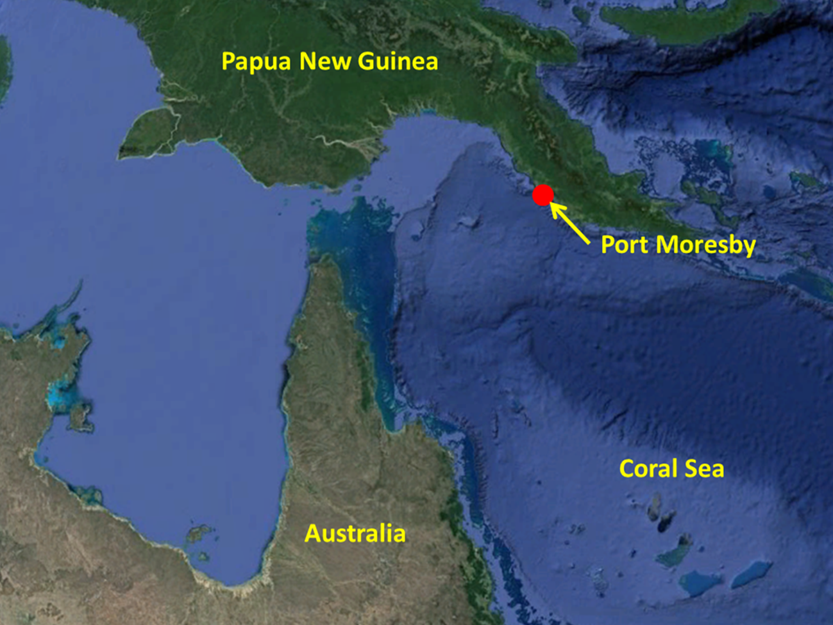 Located on the southern coast of New Guinea, Port Moresby was important because any allied attack north through New Guinea towards Rabaul required Port Moresby as a base.

By March 1942, the United States had cracked part of the current Japanese Naval (JN) code, JN-25. However, U.S. intelligence could intercept only about 60 percent of all Japanese transmissions and had the resources to analyze only about 40 percent of the messages it did intercept. Even then, code breakers typically could read only 10 to 15 percent of the code groups in a message.  Navy Radio Intelligence primarily used direction-finding equipment to learn where many Japanese ships were and where they were heading.

Just three months after the attack on Pearl Harbor, ADM Chuichi Nagumo (A) of the Japanese Imperial Navy completed the Japanese Indian Ocean raid, known as Operation C between March 31 and April 10, 1942.  While ADM Nagumo continued to look for looked for targets in the Indian Ocean, U.S. Navy Radio Intelligence analysts picked up signs pointing in an altogether different direction.

The Navy’s Communication Intelligence (COMINT) specialists now started to make their presence felt.  They estimated that an altogether new Japanese operation was in the works. The first indication of such an offensive showed up on March 25, when cryptanalysts in Station CAST, the code name for Fleet Radio Melbourne Australia (FRUMEL) and Station HYPO, the code name for Fleet Radio Unit Pacific (FRUPAC) Station HYPO at Pearl Harbor decrypted a message from the commander of the South Seas Air Force ordering his fighters at assist in “the RZP campaign.”  No one at Station CAST or Station HYPO had ever heard of an RZP campaign.

Then on April 8, 1942 CDR Rochefort’s team at Station HYPO decrypted a Japanese message noting that the Kaga, one of ADM Nagumo’s six fleet carriers, was scheduled for RZP.  In the message to ADM Nimitz, Commander in Chief, United States Pacific Fleet, ADM King, Commander in Chief, United States Fleet and Chief of Naval Operations, and OP-20-G, CDR Rochefort stated that “RZP is Moresby.”

Weeks earlier Station HYPO’s analysists had determined that geographic designators beginning with “A” were U.S. assets in the central and northern Pacific. The analysists confirmed that AF was Midway, AG was Johnston Island, AH was Oahu and AK was Pearl Harbor.

For Australian, Papua and Solomon the Japanese used geographic designations that started “R.” Among others, RR was Rabaul (homeport for the Japanese South Seas Fleet), RXS was Noumea in the southwest Pacific, RZM was Lae on the northern coast o New Guinea.  RZP, however, was listed as unknown.

Spurred by CDR Rochefort’s estimate and reinforced by similar reports from Station CAST and OP-20-G, code name Station Negat in Washington D.C., ADM Nimitz on April 17, 1942 convened his staff to discuss the Imperial Japanese Navy’s impending offensive.  As a working hypothesis, ADM Nimitz accepted CDR Rochefort’s assumption that the Fifth Carrier Division (B) would join the forces assembling in Truk and Rabaul, almost certainly for a massive thrust southward. At the time, ADM Nimitz believed the Imperial Japanese Navy would have as many as four carriers with suitable cruiser and destroyer escort and land-based air from the Rabaul area.

ADM Nimitz dispatched a memo to ADM King.  Assuming Moresby was indeed Japan’s target, he told ADM King he expected the Japanese to marshal an armada consisting of at least four fleet carriers in a campaign that would begin around the end of April.  He proposed that Task Force 11, commanded by RADM Aubrey Fitch on board the USS Lexington; and Task Force 17, commanded by RADM Fletcher on board the USS Yorktown be moved into the Coral Sea to block its advance.  As the senior officer of the two Task Forces, RADM Fletcher would be command.

It is widely believed that if VADM William “Bull” Halsey had been able to move USS Enterprise (CV 6) and USS Hornet (CV 8) there too, the U.S. might have been able to destroy the Japanese fleet. But USS Enterprise (CV 6) and USS Hornet (CV 8) needed refitting after the Doolittle raid of April 18, 1942, and could not get there in time for the battle. The Fifth Carrier Division had a total of 124 aircraft.

(A) Nagumo Chūichi, March 25, 1887 – July 6, 1944) was a Japanese admiral in the Imperial Japanese Navy (IJN) during World War II and onetime commander of the Kido Butai (the carrier battle group). He killed himself during the Battle of Saipan.

(B) Subordinate to the 1st Air Fleet that consisted of the fleet carriers Shōkaku and Zuikaku. These two ships participated in the attack on Pearl Harbor.