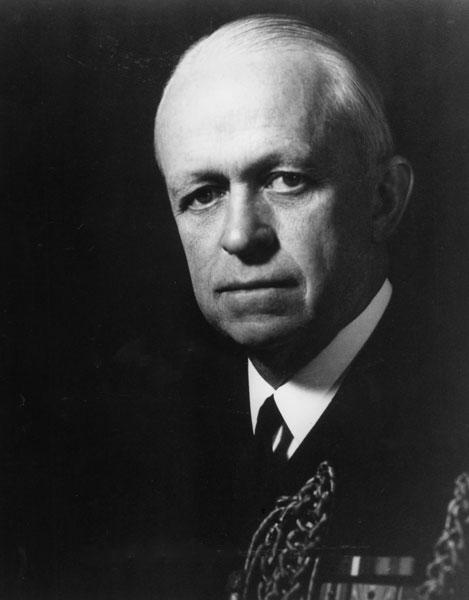 Vice Admiral Willson was born in Fredonia, New York on 27 December 1883. He graduated from the U.S. Naval Academy in 1906 and was commissioned Ensign in 1908. He then served on board battleships and other major combatants, plus on four Atlantic Fleet staffs, including as an Aide to the Commander in Chief.

LT Willson reported to the Navy Department on 8 January 1917. When the U.S. entered World War I, he was charged with updating Navy signals and codes, organizing critical functions of the Naval Communication Service, and coordinating with our British Allies. He oversaw production and Fleet-wide distribution of the Navy Code (later Cipher) Box, his cryptographic invention, and associated multiple new cryptographic systems. His success earned LT Willson promotion to LCDR in May 1917, to CDR in July 1918, and the award of a Navy Cross.

After the war, he saw sea duty with the British Grand Fleet in October 1918, with special temporary duty in connection with Signal Books. In 1923, he helped evaluate the Hebern Electric Cipher Machine. Three ship commands followed in quick succession, then a year at the Naval War College, another ship command, and two tours as executive officer.

Just prior to assuming command of the battleship USS PENNSYLVANIA (BB-38) in April 1935, he was awarded $15,000 by Congress in lieu of royalties for his World War I invention. He next served as a member of the U.S. Naval Mission to Brazil from 1927 to 1930, when he received promotion to Captain. From 1937 to 1939, he became the U.S. Naval Attaché at the Court of St. James, American Embassy, London.  Then he served as Commander Battleship Division One in Hawaii where he was promoted to Flag rank in May 1939.

RADM Willson returned in January 1941 as Superintendent of the Naval Academy, where his only son, Russell Willson, Jr., was commissioned with distinction in February. Russell Junior died in an airplane crash in June 1945. In 1942, VADM Willson was selected by ADM Ernest J. King to serve as Deputy Commander in Chief, U.S. Fleet. He was retired for medical reasons in 1943, but was immediately recalled to active duty. He served as a member of the Joint Strategic Survey Committee of the Joint Chiefs of Staff, a member of the American Delegation at the Dumbarton Oaks Conference in 1944, and military advisor at the United Nations Conference on International Organization in 1945. VADM Willson was relieved of all active duty in February 1946.

Source: NCVA/Echoes of Our Past