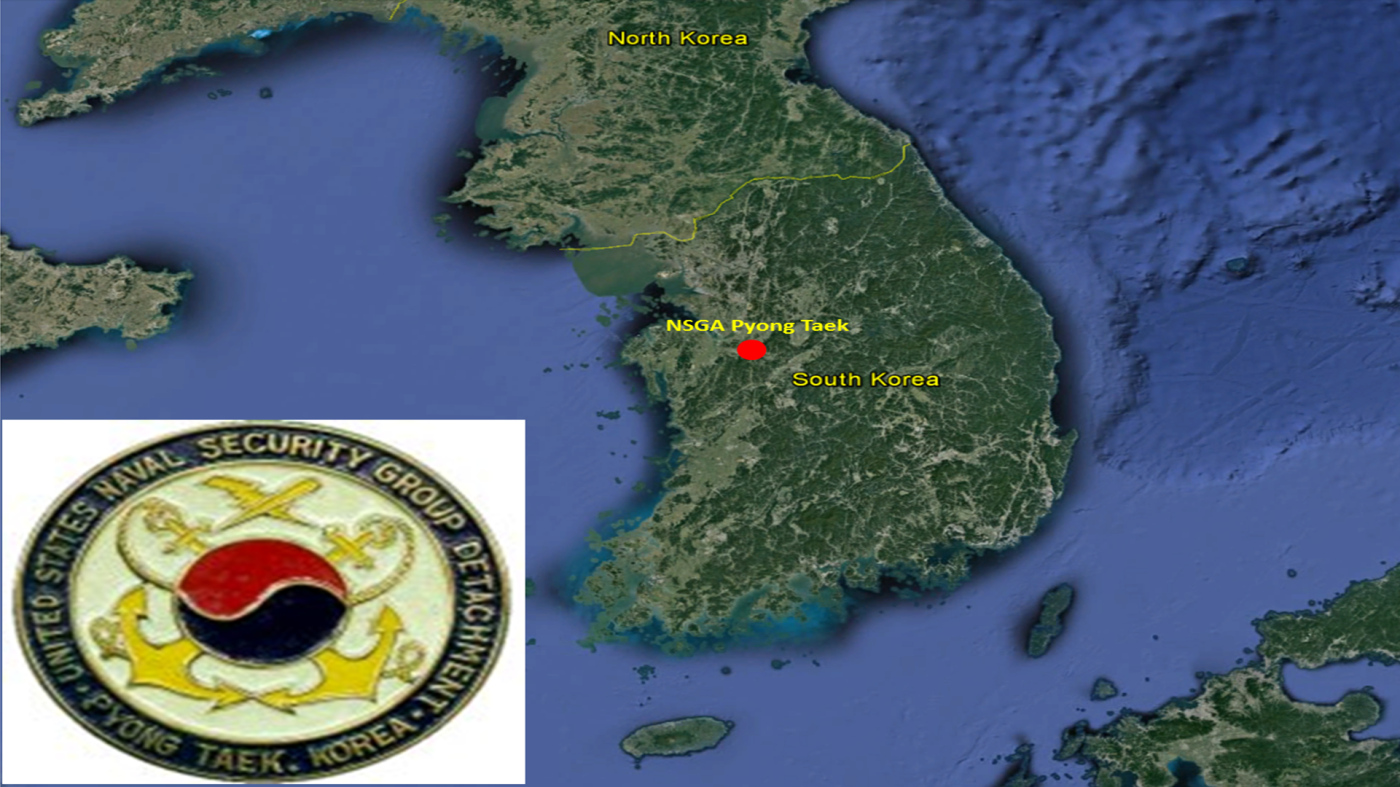 The activity was a Detachment of NSGA Misawa, Japan and was commanded by an Officer-in-Charge, LT Raymond J. Biziorek. The mission assigned to LT Biziorek was to organize and bring on-line a fully functional NSGD, to perform both High Frequency Direction Finding (HFDF) and collection activity in support of Commander Naval Forces Korea. The original “ships company” was made up of a small group of 16-20 Cryptologic Technicians (CTs), many having served together at NSGA Hakata, Japan who were rotated in from various Naval Security Group stations.

Located on the Army Security Agency (ASA) compound, the NSGD was located on a desolate part of the base, separated geographically from all other base activities, approximately 1/2 mile inside the main gate down a lonely perimeter road with only a small Mess Hall and Enlisted Club immediately located outside of the ASA compound gate. The compound itself was fenced off and gated, consisting of a small grouping of barracks, an Administrations building, a power plant and an Operations Center.  The Navy personnel were assigned to one barrack originally, with the exception of LT Biziorek. Eventually, as the Detachment grew the senior Non-Commission Officers (NCOs) were relocated to a separate barrack sharing the facility with senior Army NCO’s. By March, 1973 the Navy contingent had grown to approximately 65 CTs.

The Quarterdeck and Administration Offices were set up in a small area of the Army ASA Administration Building, where the O.I.C. and Detachment Chief maintained working offices. Other than the Quarterdeck and Enlisted Barracks, all other compound facilities were shared equally with our ASA hosts (Op Center, Mess Hall, Enlisted Club, and of course – the outdoor basketball court which doubled as a formation point for inspections, etc.).

The Operations Center was antiquated at its best.  The “R” branch section was located in a single room that consisted of one high HFDF position, several R-390 positions and one teletype position. The HFDF position looked old enough to be something out of a “B” rated sci-fi movie from the early 1950’s, and it performed accordingly – when it was working at all.

Our work was difficult, performed under difficult conditions, but we relished the challenge and performed admirably as a team and as individuals. While we had to share our workspace with ASA personnel, our off time was spent many times as a group, in the Village of Anjong Ri. With all of us having been granted gangway liberty, from the get go, it was not long before the ASA guys and even the other Army personnel on base were able to pick up on this, which caused us some problems but nothing we didn’t overcome. We formed a Navy Softball team, and shortly thereafter LT Biziorek was invited by the base commander, Colonel “Big Fred” Best (son of a Navy Corpsman) to enter our team in the Camp Humphreys softball league.  Little did he or we know at the time, our team would wind up winning the Camp Championship and “Big Fred” would have to present us with the winning the trophy.  I have always looked to that achievement as a source of pride, knowing that our Detachment of 65 men defeated the best teams that the 5,000 man Army base could muster. GO NAVY – BEAT ARMY! The final game, to decide the championship, was surrealistic.

It was played at the main baseball park, with lights, stands, fences and dugouts. The fans were a mixture of Army and Navy personnel, dependents, bargirls from the Village and civilian base workers. What a spectacle.  A vision worthy of a video camera today, recording the event for all posterity and great laughs too. There we were, the Navy team decked out in our sky blue and orange team shirts, emblazoned with NAVSECGRUDET on the front, our names and numbers on the back and a small “Top Hat Logo” on the sleeve (supplied by Mr. Lee, owner of the Top Hat Club in the Village), in our denim uniform bell bottoms, finished off with boon-dockers. The Army was fashioned in real uniforms of Black and Gold, with matching socks, cleats, hats, etc.

Well, in the end, thank goodness looks didn’t matter; we won the game and stole the day, and partied with our Army counterparts through the night, with the Army buying the beer. It was a fine ending to a great season and went a long way to bonding us with our Army hosts. “Big Fred”, shortly after this day, asked LT Biziorek if he would TAD three of our team (me included at first base) to play on his Base team, entered into the 8th Army Softball championship to be held in Taegu. It was done and the next thing the three of us knew, we were in Army uniforms, insignia and all, playing softball at Taegu! That was some trip, flying down in the Army’s 45th H-2 helicopters and staying for the few days before we got eliminated. Outside of “Big Fred” and LT Biziorek, no other brass to my knowledge was aware of it in either service.

The Navy operations at Pyong Taek, Korea ran as a detachment for the next eight years until June 13, 1980 when the Naval Security Group Activity, Pyong Taek was officially established. There were many changes to the operation over the years and on December 11, 1993 the NSGA was officially disestablished.