Naval Security Group operations in Japan date back to the establishment of a Communications Supplementary Activity Detachment (COMSUPACT Det) in Ohminato, Japan, in northern Japan, on December 15, 1945.

On that date, Radioman First Class (RM1) Brillhart arrived in Ohminato, from COMSUPACT Adak, Alaska with six men. The unit began operations in the Headquarters building of Company H5, 11th Parachute Infantry, 11th Airborne Division, Ohminato, Japan. RM1 Brillhart’s detachment remained in Ohminato until the end of April, 1946, when the U.S. Army evacuated Ohminato. The detachment moved to Yokosuka, where it was attached to the Commander, Fleet Activities Yokosuka, for administrative purposes. At Yokosuka, RM1 Brillhart was relieved in the latter part of 1946, by RM1 Al Geiken.

On November 22, 1948, NAVCOMMUNIT 35 was established at Yokosuka to add a Direction Finding capability, under an Officer-in-Charge, LCDR Daniel W. Heagy. That HFDF function was installed during the late fall of 1948 using a test rhombic antenna. By February, 1949, a full rhombic antenna field had been constructed at Yokosuka, and the DF site was in full operation. 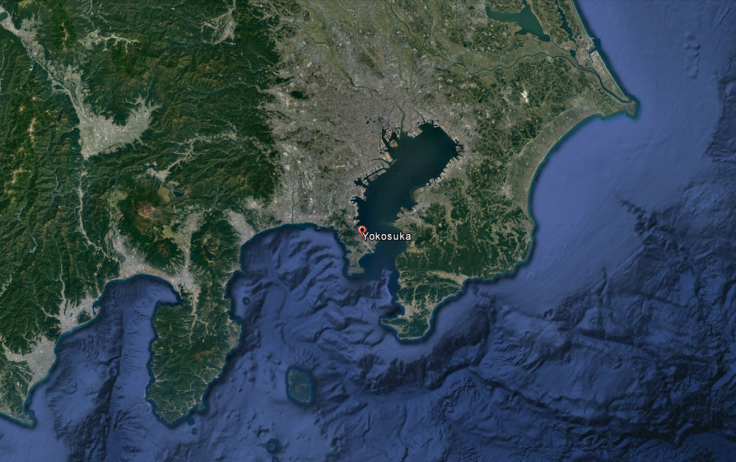 By July, 1950, NAVSECGRU began making plans to shift net control of the Pacific HFDF Net to Yokosuka from Wahiawa, Hawaii. In order to meet the new operational requirements, NAVCOMMUNIT 35 had to be expanded to 38 officers and 392 enlisted personnel. In addition, more space was required. The space problem was solved by renovating Building F-68 at Yokosuka, as well as moving part of NAVCOMMUNIT 35 into facilities near Yokohama, at Kannon Zaki. The Pacific HFDF Net was activated at Yokosuka on October 2, 1950.

With the increase in size and responsibilities, the Officer-in-Charge billet at NAVCOMMUNIT 35 was upgraded to Captain, and Captain Wesley A. Wright was ordered to be the first Commanding Officer of the newly created U.S. Naval Communications Facility, Yokosuka, Japan. On December 29, 1950, NAVCOMMFAC Yokosuka, Japan was established consisting of the Communications Center at Headquarters, COMNAVFE in Tokyo; the U.S. Naval Radio Facility (Special) (NAVRADFAC S), in Yokosuka, including the site at Kannon Zaki, near Yokohama; the U.S. Naval Radio Facility (T) (NAVRADFAC T) in Totuka; and the U.S. Naval Radio Facility (T) (NAVRADFAC T) in Yosami, Japan. On the same date, December 29, 1950, CDR Daniel W. Heagy became the first Officer-in-Charge of the NAVRADFAC (S), Yokosuka, Japan. On July 2, 1951, CDR Heagy was relieved by CDR Thomas R. Mackie.

By the end of 1950, it was apparent that expansion of the facilities at Yokosuka was no longer possible. With project growth of NABSECGRU operations envisioned, sites were surveyed, and the optimal choice was a site near Atsugi Naval Air Station. Land was acquired under Procurement Demand JPNR 5307 dated March 15, 1951. The location of the site was to the north of a village named Seya. The new site came to be known as Kami Seya.