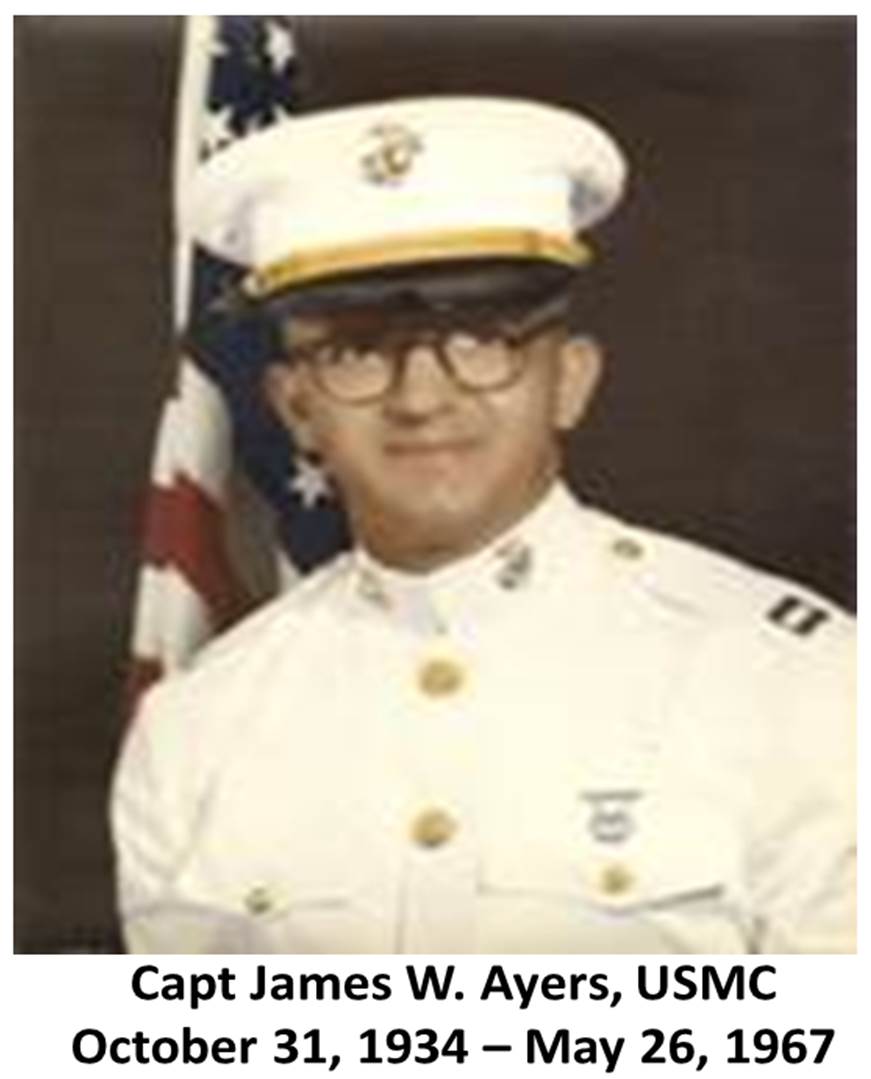 Capt James Ayers, USMC, the first Commanding Officer of Company K, Marine Support Battalion onboard NCTC Corry Station in Pensacola, Florida was killed in action on May 26, 1967 in Vietnam.  His was on his third tour to Vietnam.

He was serving as the Communications Platoon Commander, Headquarters and Service Company, Third Battalion, Fifth Marine Regiment, First Marine Division in Quang Tin, Republic of Vietnam.  His name appears on Panel 20E, Row 110 of the Vietnam Veterans Memorial in Washington D.C.  Capt Ayers is buried about 300 yards from his parents’ house where he was born on Sugar Hill Road, Moncks Corner, SC.

Capt James Westley Ayers was born 31 October 1934 in Moncks Corner, South Carolina.  He was the eighth of nine children, only two of which were girls.  He played first team varsity football and was a class officer during his senior year at Berkeley High School, class of 1952.  Capt Ayers, while in High School, coaxed several boys to join the Glee Club, adding they needed male voices and “to broaden their cultural experience.”  The high school class was small and most of the students had grown up together.  Many knew Capt Ayers and considered him a good person.

In the fall of 1952 Capt Ayers became a cadet at The Citadel.  On campus he was known to go for daily runs no matter the weather and he also did well academically.  While a junior he able to make high enough grades to earn “Gold Stars” for his blouse.  His leadership traits began to show as he started mentoring and tutoring freshman, as they struggled with academics and “Plebe” duties.  Growing debt caused Capt Ayers to change his major from Pre-Med to Political Science.  He graduated college in 1957.

On April 5, 1957, after graduation, Capt Ayers joined the United States Marine Corps and on January 13, 1958, he was commissioned as a Second Lieutenant.  After being his commissioned, Capt Ayers received training as a communication officer (MOS 2502).   On July 1, 1962, he was promoted to Captain and in 1966 he was selected for Major.

He was selected for major prior to his death.

Capt James Ayers would have been 85 years old today.