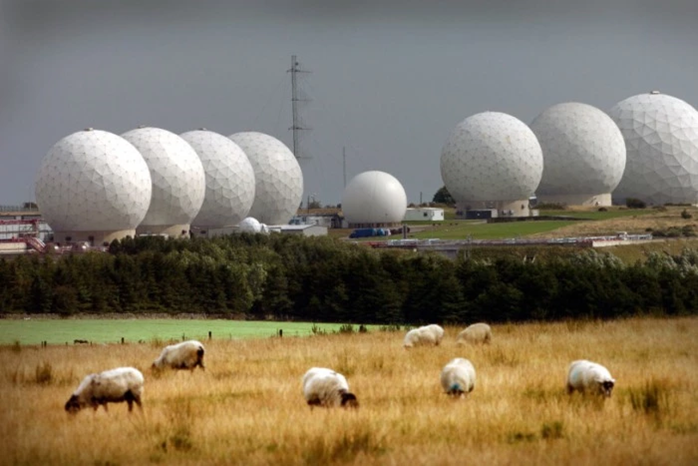 Menwith Hill Station was touted to be the largest Signal Intelligence facility in the world with a mission to provide rapid radio relay and to conduct communications research. Menwith Hill is recognizable by several dozen radomes (golf balls), each containing a satellite tracking dish. The land beneath the antennas is sublet to local farmers for grazing.

The generally accepted meaning of the name Menwith is woodland. This is appropriate since the area is in the region known as the “Forest of Knaresborough.”  The area surrounding the station is now largely treeless farm and moor land.  The designation RAF Menwith Hill came into effect on February 19, 1996.

The land occupied by RAF Menwith Hill was acquired by the British War Office in 1954 and was subsequently leased to the United States (U.S.) to build RAF Menwith Hill.  The vast majority of staff are British Government Communication Headquarters (GCHQ) personnel, American civil service employees, government contractors, as well as U.S. military personnel. The base was also known as Field station F83.

Menwith Hill Station was established in 1956 by the U.S. Army Security Agency (USASA).  Menwith Hill was operated by the USASA from 1958 until June 1966 as a High Frequency radio communications monitoring station.

In 1966 the National Security Agency (NSA) took on responsibility for the U.S. operation of the site, expanding the capabilities to monitor international leased line communications transiting through Britain. The site was then one of the earliest to receive sophisticated early IBM computers, with which NSA automated the labor intensive work of intercepted unenciphered telex messages.