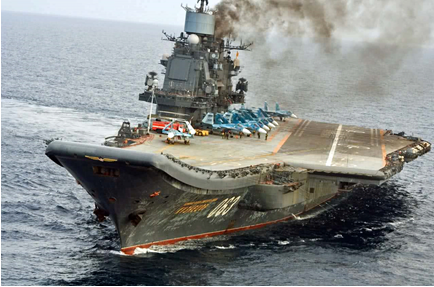 When Putin pulled the bulk of Russia’s military forces out of Syria last March, it caught the West off guard. NATO probably thought that the Russians were interested in the same catastrophic brand of nation building that they are, but the Russians proved to be smarter than that.

However, while the Russians don’t plan on being bogged down in a Middle Eastern quagmire, they’re not quite done bombing ISIS in Syria.

Russia’s aircraft carrier is going to be deployed to the Eastern Mediterranean between October of 2016 and January of 2017. “The General Staff has prepared a plan for involvement of the deck aircraft in delivering strikes on terrorist groups in the Syrian Arab Republic, where the crews will practice taking off the carrier to deliver strikes on ground targets.”

The ship itself is built with archaic internal infrastructure, including pipes that freeze over constantly, reducing water supply by over 60% to cabins on the ship. Of around 50 latrines aboard the vessel, only 20-25 of them are operational… for a crew of nearly 1500. Ventilation systems are constantly in and out of order, and the ship’s engines are prone to breaking down while underway, necessitating the Navy deploying an oceangoing tug along with Kuznetsov whenever it heads out to sea. Occasional fires, outdated gear and equipment, and poor readiness levels among the crew – not to mention over six hours of formation (where crew stand in formation to receive orders) daily – appear to lend more credence to the aforementioned phrase.

A three-month refit last year attempted to mitigate some of these issues by repairing and adding to the ship’s onboard electronics, fixing up the ship’s propulsion, and “modernizing” the rest of the ship to a current standard. Just how effective such a modernization effort was is anyone’s guess. But that’s not where Kuznetsov‘s laundry list of problems ends!

The 1,000 foot, 43,000 ton ship known as the Admiral Kuznetsov, which is Russia’s only remaining aircraft carrier after the fall of the Soviet Union, will be carrying an estimated 8 Sukhoj Su-33 fighters, 4 MiG-29 warplanes, and 10 Kamov helicopters. The ship will be coordinating with the Latakia Hmeymim Air Base in Syria, and will be deployed close enough to Syria’s shoreline “so that the deck aircraft have enough fuel to complete the military tasks and return back.”  The Russian battle group will consist of three combatants led by the heavy aircraft-carrying missile cruiser, Admiral Kuznetsov.

Russian military officials insist that the move has no connection with the ongoing crisis in the region and were planned a year ago. Apart from Syria, the aircraft carrier and its escort ships are set to visit Malta’s Valletta the Lebanese capital, Beirut, Genoa in Italy and Limassol, Cyprus.

The mission is set to start after 20 October 2016, when the Admiral Kuznetsov begins its journey from the Barents Sea, accompanied by Project 1155 Udaloj Class Heavy ASW Ship ‘Severomorsk’ with Pennant Number 619, Fleet Replenishment Ship Sergej Osipov and a Seagoing Tug.  The group will then skirt the European continent from the west and enter the Mediterranean through the Strait of Gibraltar.

Later, they will be joined by Project 1135 Burevestnik Class Frigate Ladnyj with Pennant Number 861 of Russia’s Black Sea Fleet. The Frigate will travel through the Bosphorus, with a stop-over in Malta’s Valletta and to rendezvous with the carrier group.

The Admiral Kuznetsov has already been twice to the port of Tartus during its assignments in the Mediterranean and Atlantic Ocean in 1995 and 2007.

During March 2016, the aircraft carrier is at Murmansk’s (Roslyakovo) 35th Shipyard, where specialists prepare it for the long-distance campaign. The source, however, did not specify what tasks the flagship of the Russian Navy will have in the Mediterranean grouping.

During the months before the campaign, the jets’ crews will practice skills of takeoff and landing on the carrier deck at ground training facilities in Novofedorovka-Saki (NITKA) (Crimea) and Ejsk (NIUTK-KA) (shore of the Azov Sea).

In late April the deck aircraft pilots of the Northern Fleet arrived in Crimea to prepare to land at the fitness complex NITKA completely resembles the size and shape of the deck of an aircraft carrier “Admiral Kuznetsov”.  In the Crimean city Saki arrived ten decked Su-33 and Su-25UTG.

On 15 June 2016, the Cruiser left the waters of the 35th shipyard after the completion of the first phase of restoration of combat readiness.

On 24 June 2016, the ten deck-aircraft Su-33 and Su-25UTG of the Northern Fleet began a flight from the Crimea to Severomorsk-3 (Mal’yavr) their permanent base. Crews completed their practice on ground test training complex NITKA.

One source, said he doubted that pilots of the 100th Regiment, currently in Ejsk, Krasnodar territory, where another NITKA (NIUTK-KA) center has been built, would have enough time to prepare for the deployment. Officials said that the regiment could be ready for flights only by the end of the year.

On 12 August 2016, the Cruiser arrived to undergo a second phase of the maintenance and restoration of technical readiness at the 35th shipyard, although this operation was planned only after 15 August. It is therefore expected that the ship will leave the shipyard the last week of September. 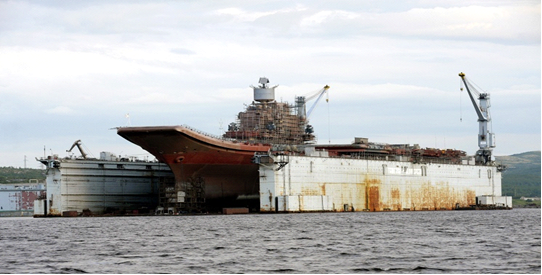 During the day the sailors performed a series of joint maneuvers in the composition of the operational orders, with an emphasis on navigation safety. They conducted training exercises, worked out a conditional transfer of liquid cargo and assisting the victim distress vessel. The crews of the warships also worked out objectives for the protection and defense of the squadron.

“Admiral Kuznetsov” is now at 35th shipyard in Murmansk, where its final modernization and restoration of technical readiness will be carried out.

Upon completion of the work will go to the aircraft cruiser combat training ranges in the Barents Sea with a group of ships to test new systems, and then-to the shores of Syria.

All in all, it will be interesting to see how such a deployment plays out, and just how Russia’s sole carrier performs when placed in a combat situation similar to what American aircraft carriers have seen over the past 15 plus years (launching only strike and close air support missions). The tug that travels with Kuznetsov when it goes out of port will probably be along for the ride on this deployment, just in case.

26 September 2016, Kuznetsov began sea trials for the upcoming deployment – departing between 15 – 20 October.  It was observed that 6 – 8 Su-33, 4 MiG-29KR/KUBR and a few helicopters including the Ka-52.  This is probably close to the deployment air wing.

Russia expects to keep the Kuznetsov out of port till late January, which could also mark the longest deployment on record for the ship, though machinery issues could flare up as they have in the past, and bring the vessel back in far earlier. Upon its return home, it’ll undergo a massive overhaul and refit that’ll add 25 years to its life.

On 11 October 2016, it now appears certain that the Russian Navy’s sole aircraft carrier, “Admiral Kuznetsov”, along with the nuclear-powered cruiser “Petr Velikiy” and destroyer “Severomorsk”, are preparing to deploy within the next week.

According to social media, “Petr Velikiy” will transfer to a mooring position near Severomorsk on October 9 and depart from there on October 15 for a six- to eight-month deployment.

The aircraft carrier is expected to deploy with a mixed inventory of KA-27/KA-29 Helix PL-PS and KA-52 Hokum B helicopters, as well as SU-33 Flanker D and MIG-29KR Fulcrum D fighters.

Repairs of “Admiral Kuznetsov” began last spring, and it appeared they would continue until the end of this year; however, the repairs were completed earlier than scheduled. Following a number of underway combat drills and carrier flight operations, “Admiral Kuznetsov” returned to Rosta for final preparations before it transfers to its Severomorsk mooring position this week.

In preparation for the campaign in the Mediterranean Sea, with the participation of the aircraft carrier Admiral Kuznetsov Cruiser, the crews of the ships and auxiliary ships of the Northern Fleet in the Barents Sea have completed action on the formation of operational orders.

By the late Ron Schneider