The Krasnodar, a Russian attack submarine, left the coast of Libya in late May 2017, headed east across the Mediterranean, then slipped undersea, quiet as a mouse. Then, it fired a volley of cruise missiles into Syria.

In the days that followed, the diesel-electric submarine was pursued by the aircraft carrier USS George H.W. Bush, its five accompanying warships, MH-60R Seahawk helicopters and P-8 Poseidon anti-submarine jets flying out of Italy.

The U.S. and its allies had set out to track the Krasnodar as it moved to its new home in the Black Sea. The missile attack upended what had been a routine voyage, and prompted one of the first U.S. efforts to track a Russian submarine during combat since the Cold War. Over the next weeks, the submarine at points eluded detection in a sea hunt that tested the readiness of Western allies for a new era in naval warfare.

An unexpected resurgence in Russian submarine development, which deteriorated after the breakup of the Soviet Union, has reignited the undersea rivalry of the Cold War, when both sides deployed fleets of attack submarines to hunt for rival submarines carrying nuclear-armed ballistic missiles.

When underwater, enemy submarines are heard, not seen—and Russia brags that its new submarines are the world’s quietest. The Krasnodar is wrapped in echo-absorbing skin to evade sonar; its propulsion system is mounted on noise-cutting dampers; rechargeable batteries drive it in near silence, leaving little for submarine hunters to hear. “The Black Hole,” U.S. allies call it.

“As you improve the quieting of the submarines and their capability to move that much more stealthily through the water, it makes it that much harder to find,” said U.S. Navy Captain Benjamin Nicholson, of Destroyer Squadron 22, who oversees surface and undersea warfare for the USS Bush strike group. “Not impossible, just more difficult.”

Russia’s support of Syrian President Bashar al-Assad has given Russian President Vladimir Putin opportunities to test the cruise missiles aboard the new submarines over the past two years, raising the stakes for the U.S. and its allies.

Top officials of North Atlantic Treaty Organization say the alliance must consider new investments in submarines and sub-hunting technology. The findings of a study this year from the Center for a New American Security, a Washington-based think tank, grabbed the attention of senior NATO leaders: The U.S. and its allies weren’t prepared for an undersea conflict with Russia.

“We still remain dominant in the undersea world,” said General Curtis Scaparrotti, the top U.S. and NATO commander in Europe. “But we too must focus on modernizing the equipment we have and improving our skills.”

The U.S. Navy, which for years trained its sub-hunting teams through naval exercises and computer simulations, is again tracking Russian submarines in the Baltic, North Atlantic and Mediterranean seas. The challenge extends beyond Russia, which has sold submarines to China, India and elsewhere.

“Nothing gets you better than doing it for real,” Captain Nicholson said. “Steel sharpens steel.”

This account was based on interviews with officials from the U.S. Navy, NATO and crew members aboard the USS Bush, as well as Russian government announcements.

NATO’s maritime force, led by a Dutch frigate, took first lookout duty. The Dutch sent a NH-90 helicopter to snap a photograph of the submarine in the North Sea. Surveillance of the Krasnodar then turned to the U.K.’s HMS Somerset on 05 May, about the time the submarine entered the North Sea by the Dutch coast.

The Krasnodar passed through the English Channel and continued past France and Spain, where a Spanish patrol boat took up the escort.

When the submarine reached Gibraltar, a U.S. Navy cruiser monitored the submarine’s entry into the Mediterranean Sea on 13 May.  U.S. Navy P-8 Poseidon aircraft, flying out of the Sigonella air base in Italy, also took up watch.

“We want to see where it goes,” Captain Ellis said. “At any time, a submarine could submerge and start to be hidden, so we want to follow.”

As the Krasnodar headed east, Russia’s Defense Ministry notified international airlines that it would be conducting drills off the coast of Libya. U.S. officials and defense analysts said the drills were part of a sales pitch to potential buyers, including Egypt, that would show off the submarine’s cruise missiles.

With both U.S. and Russian forces crossing paths in Syria, each pursuing distinct and sometimes conflicting agendas, the battlefield has grown more complicated. The Russians have given only limited warnings of their strikes to the U.S.-led coalition. That has required the U.S. and its allies to keep a close eye on Russian submarines hiding in the Mediterranean.

Nuclear-armed submarines are the cornerstone of the U.S. and U.K.’s strategic deterrent. For the U.S., these submarines make up one leg of the so-called triad of nuclear forces—serving, essentially, as a retaliatory strike force.

Smaller attack submarines like the Krasnodar, armed with conventional torpedoes and cruise missiles, can pose a more tangible threat to U.S. aircraft carriers, which are the Navy’s most important weapon to project American power around the world.

On 05 June, the USS Bush, a $6.2 billion carrier, and its warships, passed through the Suez Canal into the Mediterranean. Its mission was to support U.S.-backed Syrian rebels and attack Islamic State positions.

Amid rising tensions between U.S. and Russian military forces in Syria—and with the Krasnodar trying to evade Western surveillance—the job of the USS Bush now also included tracking the submarine and learning more about its so-called pattern of life: its tactics, techniques and battle rhythms.

By then, the Krasnodar had slipped beneath the waves and begun the game of hide and seek. Sailors and aviators with little real-world experience in anti-sub warfare began a crash course.

“It is an indication of the changing dynamic in the world that a skill set, maybe we didn’t spend a lot of time on in the last 15 years, is coming back,” said Capt. Jim McCall, commander of the air wing on the USS Bush.

The Krasnodar was designed to operate close to shore, invisible to opposing forces and able to strike missile targets 1,600 miles away. The coastal waters of the Mediterranean south of Cyprus, which put it within range of Syria, provided plenty of places to hide.

Finding a submarine that is operating on batteries underwater is very difficult. How many hours or days the Krasnodar’s batteries can operate before recharging is a secret neither Russian officials who know, nor the U.S. Navy, which may have a good idea, will talk about.

For many days in June, a squadron of MH-60R Seahawk helicopters lifted off from the deck of the USS Bush and its accompanying destroyers in the eastern Mediterranean. Some used radar for signs of the Krasnodar on the water’s surface. Others lowered sonar beacons to varying ocean depths.

“When you find what you are looking for in an ocean of nothingness, then it feels really good,” said Naval Aircrewman First Class Scott Fetterhoff, who manned radar gear aboard a Seahawk helicopter. U.S. Navy radar, used on ships, helicopters and jets, can detect objects as small as a periscope.

Commander Edward Fossati, the commander of Helicopter Maritime Strike Squadron 70, the Bush Strike Group’s sub-hunting helicopters, said Russian subs have gotten quieter but the cat-and-mouse game remained about even with advances in tracking: “We are much better at it than we were 20 years ago.” 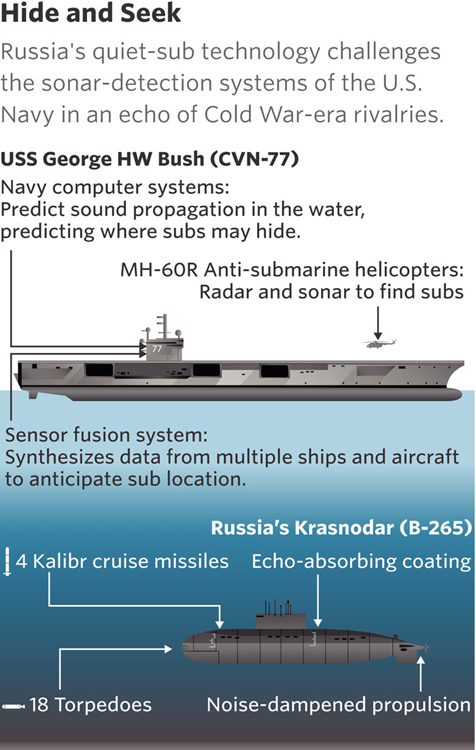 Submarines look for ways to hamper sonar equipment by exploiting undersea terrain and subsurface ocean currents and eddies. Differences in water temperature and density can bend sound waves, making it difficult to pinpoint the source of a sound.

U.S. Navy computer systems analyze the ocean environment and make predictions about how sound will travel in each patch of ocean. Using the submarine’s last known position and expected destination, the oceanographers use the data to mark potential hiding places and determine where search teams should focus.

Moscow threatened to shoot down U.S. planes in western Syria.

Captain Ellis wouldn’t say if his P-8s had the Krasnodar in their sights.

After the Soviet Union’s collapse in 1991, Moscow curtailed undersea operations. In 2000, the nuclear-powered Kursk sank with 118 sailors, a naval tragedy emblematic of the decline.

When the Krasnodar was completed in 2015 at the St. Petersburg’s Admiralty Shipyards, Russia boasted it could elude the West’s most advanced sonar. NATO planners worry submarines could cut trans-Atlantic communication cables or keep U.S. ships from reaching Europe in a crisis, as Nazi submarines did in World War II.

“If you want to transport a lot of stuff, you must do that by ship,” said NATO’s submarine commander, Rear Admiral. Andrew Lennon. “And those ships are vulnerable to undersea threats.”

U.S. officials have said they believe that Moscow’s support of the Assad regime is partly for access to a strategic port in the eastern Mediterranean to resupply and rearm warships. The Syrian port of Tartus is expanding to include a Russian submarine maintenance facility, according to Turkish officials.

On 30 July, the Krasnodar surfaced in the Mediterranean. The Krasnodar’s port call in Tartus, coinciding with Navy Day, a celebration of Russia’s maritime forces, marked the end of its hide-and-seek maneuvers with the USS Bush. On 09 August, the Krasnodar arrived in Crimea to join the Black Sea fleet, Russian officials said. Its mission appeared a success: Moscow showed it could continue unfettered strikes in Syria with its growing undersea fleet.

By then, the Bush carrier strike group had left the eastern Mediterranean for the coast of Scotland, where the U.S. and British navies, along with a Norwegian frigate, were conducting a joint exercise called Saxon Warrior. U.K. sailors boarded the USS Bush and heard lessons from the Krasnodar hunt.

Days before the exercise, Captain. Nicholson predicted another Russian submarine would be nearby. “We are in the Russians’ backyard,” he said. “Prudence dictates we are ready for whatever or whomever might come out to watch.

A new nuclear-powered class of Russian submarines even more sophisticated than the Krasnodar, called the Yasen’, are designed to destroy aircraft carriers. They are built with low-magnetic steel to better evade detection and can dive deeper than larger U.S. submarines.

At the time of the U.S.-U.K. exercise, Russia said its only Yasen’ submarine officially in operation, the Severodvinsk, was in the Barents Sea. But a second, more advanced Yasen’ submarine, the Kazan’, was undergoing sea trials.

Russian, NATO, and U.S. officials won’t say whether the Kazan’ was shadowing the U.S.-U.K. exercise in the North Atlantic.

On 17 August, a U.S. P-8, flying from a Norwegian base, conducted three days of operations, according to amateur aviation trackers. Canadian air force patrol planes also flew out of Scotland. On 26 August, French planes joined.

Allied officials said some of the flights were searching the waters for a Russian submarine. The USS Bush, however, was out of the hunt. On 21 August, she returned to port in Norfolk, Virginia.

By the late Ron Schneider