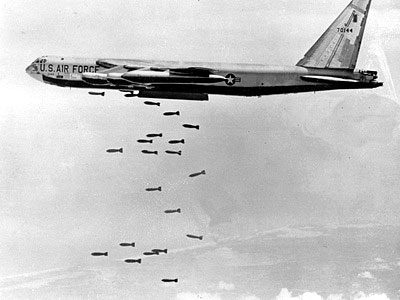 In early 1965 VQ-1 commenced a series of missions in the Gulf of Tonkin, aimed at locating enemy radars using BRIGAND.
On February 7, 1965, strikes were launched in retaliation for some Viet Cong guerilla bombings in South Vietnam. The air war over North Vietnam commenced in earnest in March 1965. Nicknamed ROLLING THUNDER, it became one of the longest bombing campaigns ever conducted by US forces. MiG 17 defensive patrols continued but stayed north of the 20th parallel. For the most part, US aircraft lost were shot down by AAA.

EC-121M missions supporting these operations were staged from various airfields in Asia. Missions were flown in and out of Da Nang, but weren’t supported by a permanent detachment. EA-3B missions were flown from one of several carriers, or in the case of the EC-121M, from NAS Cubi Point in the Philippines.  Spooks for these missions came from San Miguel, and flew without any formal TAD orders. Since the missions were flown from Cubi Point, the spooks (enlisted only, no officers flew on these missions) merely rode a van (or some other ground transportation) to the airfield, a ride of a little over an hour from San Miguel. That was just the start of a long, arduous day. Missions were ten to twelve hours in duration, but only two hours or so were spent on station. The remainder was transit time…nearly four hours each way.