The time a Soviet bomber crashed into the sea after buzzing a U.S. aircraft carrier 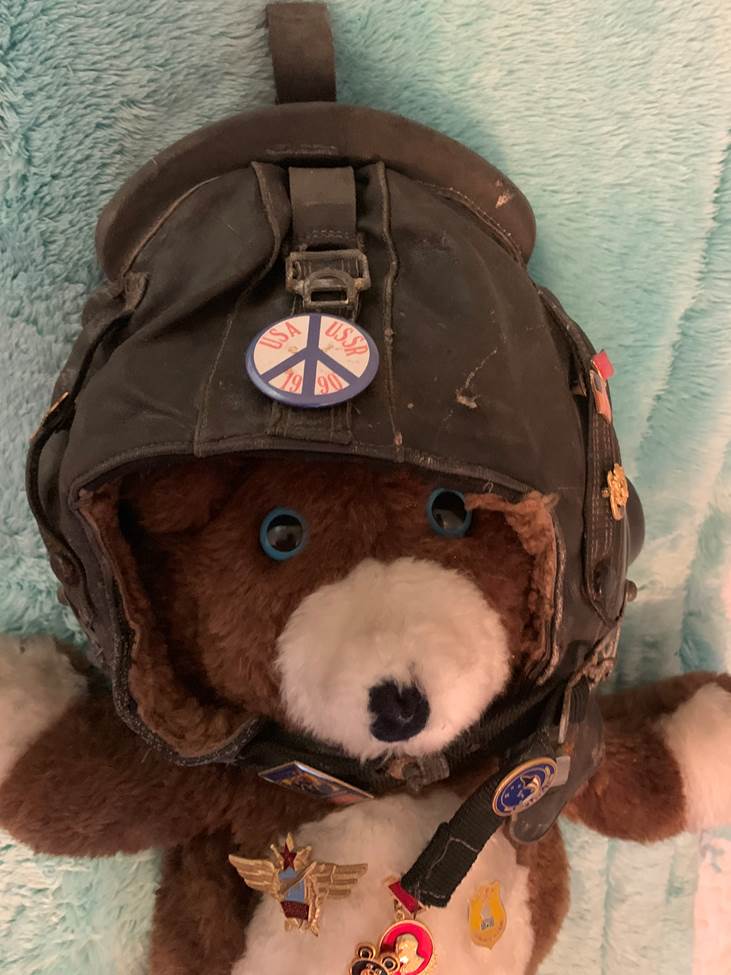 Featured picture shows the helmet of Pliyeev, the pilot of the Soviet TU-16 (BADGER F) that crashed into the North Sea on May 25, 1968.

On May 25, 1968 in the North Sea where the USS Essex was conducting anti-submarine warfare flight operations. The flight deck crew maneuvered Commander Russ Dickens’ S2 Tracker to the forward port catapult and there he waited and waited. Told to “hold up a few minutes” Dickens wondered the cause for the delay when suddenly he looked up to see the top ten feet of the tail section of a TU-16 Badger with its Red Star clearly visible pass ahead. “The fuselage of the Badger was actually below the flight deck level” the veteran pilot noted. Dickens observed the plane on its low level trajectory as it traveled about two miles out then recalled, “It appeared to me that after the initial low level turn, the pilot took a peek at is position with regards to the aircraft carrier, and that is when he dipped his wing into the water.”

Video of the Crash

Essex’s rescue helicopter, already airborne as a safety measure during flight operations, rushed to the scene of the crash and found no survivors. Small boats were placed in the water to recover debris and human remains. Concerned that the crash could be interpreted as a shoot down, flash message traffic was sent to Washington to explain the circumstances to pass along to Soviet authorities. At sea some 100 miles from the crash site, the destroyer Warrington flagged down a Soviet destroyer to pass along the same message. That destroyer immediately proceeded to the vicinity of the Essex.

As the Soviet warship arrived and took station astern, the operations officer, Commander Edward Day was given the solemn task of transporting by small boat, the aircrew remains to the Soviet warship.  As the boat made its way aft, S-2 Trackers flew the missing man formation overhead to pay homage to the lost Soviet aviators.  The Soviet destroyer rendered honors with a gun salute.

A month earlier, following a continuing series of incidents at sea such as the one discussed above, the United States had approached the Soviets on safety at sea talks. Finally, after a Soviet destroyer collided with the HMS Ark Royal on November 9, 1970, the Soviets agreed to discuss negotiating an accord that would modify the behaviors of their respective naval forces.  Signed on May 25th, 1972, by Secretary of the Navy John W. Warner and Admiral of the Fleet, Sergei Gorshkov on behalf of their presidents, the Incidents at Sea Agreement ended the days of Cowboys and Cossacks on the high seas.

One of the turning points during the negotiations came during the discussions on aviation operations where the negotiators seemed to be talking past each other. The American negotiator, Captain Edward Day decided to relate his experience of May 25, 1968 to his counterpart, the Deputy Chief of Staff for Naval Aviation General Major Nikolai I. Vishensky.  Day concluded that the purpose of their talks was to prevent such needless tragedies in the future. Vishensky became emotional. He then informed Day that the body he returned was that of his son. From then on the two men talked to each other and achieved the necessary progress to complete an agreement that remains in effect today.

One difference between today and the Cold War era is social media. During the Cold War such low overflights would be filmed and discussed at the annual review sessions out of view of the media and the political establishment. Today, such incidents can be transmitted via social media by some crewmember or embarked reporter with a smart phone and find their way into the 24 hour news cycle. Unfortunately, the short term frenzy created by such exposure could have a corrosive effect on long-term behavior regimes.

For sure, the overflights will be discussed at the next annual gathering of senior naval officers from the United States and Russia. If the pattern from past talks continues, those discussions will be frank with mistakes admitted. Furthermore, those deliberations will be kept in private. During duty with “OPNAV” Staff I once came across a stamp the read: FOR US-USSR EYES ONLY.  I would not be surprised if today it has been replaced with a FOR US-RUSSIA EYES ONLY stamp.

Dr. Winkler wrote his dissertation on the Incident at Sea Agreement that was published by the Naval Institute Press in 2000 as Cold War at Sea.

A special thanks to CWO4 Kevin Schneider, USN for sharing the picture of pilot’s helmet that he received from his Father, Ron Schneider.

2 thoughts on “The time a Soviet bomber crashed into the sea after buzzing a U.S. aircraft carrier”