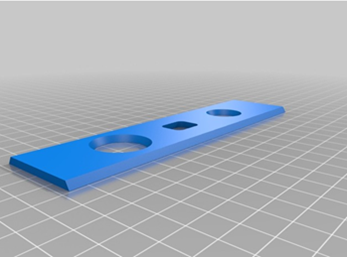 The GUHOR Stick is one of the most important tool ever invented for the traffic analyst (TA). Solutions to the most intricate communications networks often began with this simple device.

No self-respecting TA was ever without one close at hand. Like the six-shooter of the old West, the analyst kept it at his or her side, always ready to draw- circles, boxes, and lines.

The GUHOR Stick, in its most recent and best known iteration, is merely a 6″ by 1.5″ clear plastic template. Its prime purpose is to facilitate the drawing of communications diagrams, although its secondary uses are endless. It comes equipped with a large circle at one end to draw control terminals, a smaller circle at the other end for outstations, and a small rectangle in the center for communications relays and collective (CQ) calls. The straight edges are used to connect these stations and show communications paths. With this tool, a #2 pencil (with extra erasers), some graph paper, and several pencils of various colored leads, the analyst of old was fully prepared to face any communications adversary.

GUHOR Stick! But where did this strange name come from? Putting my analytical skills to work, I set out to research the issue. To my surprise, there was a higher than expected number of individuals who had heard the name. Most were seasoned veterans from a mixture of professions, including linguists, reporters, managers, executives, and, naturally, traffic analysts. But there was more than a little discussion about what this device was and where its name originated.

The early returns were mixed, however. I was still searching for the definitive word. It was at this point when I began to get responses from members of a Communications Analysis Association (CAA) interest group.  A number of seasoned veterans recounted their GUHOR experiences and, in a number of colorful responses, gave me what I believe to be the true scoop.

GUHOR Sticks as traffic analysis tools have been around for decades. Some CAA respondents remembered seeing or using them in one form or another from at least the early 1960s. Even so, a couple of questions remain unanswered. Who invented it?  Why was it given this curious name? Someone out there knows. If you can solve the mystery, we (Station HYPO) are ready to hear a good story.

All this discussion about GUHOR Sticks may be moot. These devices are few and far between these days. The GUHOR Stick does not have a federal stock number. They were made in batches at NSA by special order; however, they are fast becoming collector items. With the advent software, many analysts are using computer graphics to diagram their targets. The traditional circles and lines on paper are becoming passé. Most GUHOR Sticks that are found are being employed for many a sundry task-not for crafting the intricate networks of old, but for drawing nondescript lines and symbols unrelated to the trade of traffic analysis.

Those on field duty in the Pacific used a similar device which they called a “pooka-maker.” Pooka is a Hawaiian word for “hole.”

Starting tomorrow there will be a four part series on Traffic Analysis.