Remembering the crew of Ranger 12 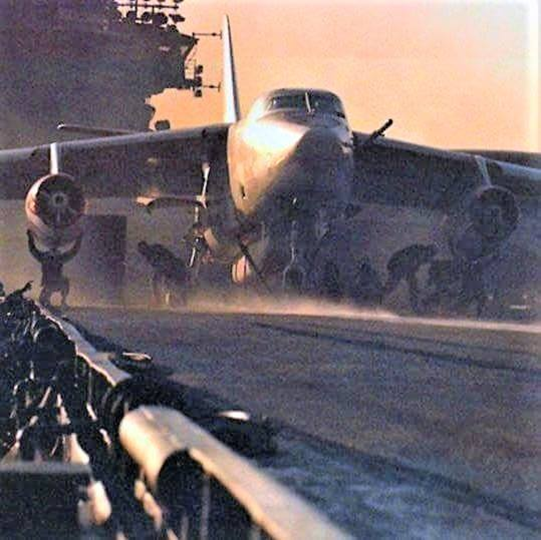 Thirty two years ago today, on January 25, 1987 Ranger 12, an EA-3B “Whale” (BuNo 144850) belonging to VQ-2, was lost while attempting to land on the USS NIMITZ (CVN 68).  Ranger 12 was returning from an operational mission in the Eastern Mediterranean and crashed off the NIMITZ’s flight deck.  All seven aircrew were killed.

The aircraft attempted to catch the arresting gear wire 5 times to no avail.  During one of the landing attempts, the EA-3B drop out of view below the flight deck almost impacting the water.

At 10:55pm, LT Levine, the pilot, was told to “bingo,” and turn east toward an 8,000 foot runway at a naval air base on the island of Crete.  “Bingo” means to give up, delaying operations the next day.  To make to Crete, however, the EA-3B would have to refuel.  Circling in a tight pattern over the USS NIMITZ was an A-7 attack plane converted to a tanker.  Normally that role was reserved for the A-6, a larger, two-engine jet that provides a steadier platform.  The smaller plane is more difficult to refuel from.  It was a crucial difference.

LT Levine now had to fly close behind the A-7 and align on a basket circled in lights that trailed from a long fuel hose.  Then, with a subtle boost of power, he would plunge the refueling probe that stuck out from his plane into the waiting basket and the Whale could nurse on 400 pounds of fuel a minute.  But instead of the steady drafting effect of an A-6’s twin engines, the A-7’s single exhaust nozzle buffeted the older plane.  LT Levine jammed the probe too hard into the basket, crimping it.  Refueling was impossible.  The only option left was the carrier!

The voices from the USS NIMITZ did not stop.  Coaxing, soothing, they told LT Levine there was still enough time.  But inside the cockpit, a red warning light glowed next to the fuel gauges.  On the USS NIMITZ, loudspeakers barked across the deck of the carrier: “Rig the barricade.”  Deck crews had been drilled repeatedly for this event. Quickly, the fourth arresting wire was raised 20 feet above the deck.  From storage bins came a strange looking curtain of nylon strips.  They were hung from the wire so that the resulting net looked like a long Venetian blind turned sideways.  Shields were raised in front of other parked aircraft to protect them.  All unnecessary personnel were off the deck.

This was the final answer for a plane too damaged to land otherwise. Or a pilot too rattled to land at all.

Ranger 12 roared toward the NIMITZ at 130mph, a blur of flame and metal too high one last time.  The Whale’s front wheels caught the top of the net, snatching her nose first from the sky, and in a shower of spares the jet skidded down the deck, twisting in a long metal-on-metal scream toward the ship’s edge.  It was a 60-foot drop to the sea.  Ranger 12 broke in half and disappeared.

Within moments, the carrier’s four large bronze propellers washed over the wreckage. All that remained for rescuers was a wisp of steam and bubbles.

Within a minute a SAR helicopter was hovering above the aircraft reporting that there was no movement inside of the aircraft.  After 13 minutes of floating, the EA-3B sank two miles down with the seven crew members to the bottom of the sea.  No one was ever recovered.

The NIMITZ searched for three days.  On January 28, the search was called off. There was a one paragraph statement issued by the Pentagon and few newspapers ran the story.

The list of the seven men who gave their lives:

The video of the accident

2 thoughts on “Remembering the crew of Ranger 12”