Early Direction Finding: From WWI Through the Cold War

Direction finding activities were pursued starting in World War One.  During the last few months of 1918 the Navy installed a rotating loop antenna at the Naval Radio Station, Bar Harbor, Maine.

This was followed shortly with installations at other east coast sites, including Boston, New York, Delaware Cape, Chesapeake Cape, and Charleston.  The single purpose of these sites was to track German submarines, a task which was unfulfilled. After the war, the tracking sites were made available to naval and merchant vessels as navigational aids.  Primarily, they were retained for their potential value for radio intelligence.  The number of these stations was increased over the years to include sites all along the Atlantic and Pacific coast, up to Alaska.  By 1924 there were 52 direction finding stations either in place or under construction.  The state of art for direction finding equipment at that time limited the operating frequencies between 100-1599kc.  The installation of radio beacons by the Department of Commerce and the increased use of high frequency radio eventually doomed the need for these medium frequency direction finding sites.

The search for an effective high frequency direction finder continued.  In 1927 the task was assigned to the Naval Research Laboratory (NRL).  Limited success was obtained in mid-1930 with the development of the rotating Adock , model XAB-RAB.  Testing of an experimental model continued at NRL until 1935 when it was replaced by a more massive unit, the CXK.  The XAB-RAB was sent to Sangley Point, P. I. in 1936 for field testing.  There, LTjg R. S. Lamb and his operators were able to conduct some tracing with it.  The following year, LT J. S. Holtwick and RM1 M. J. Royer experimented with new dipole combinations and successfully developed an effective high frequency direction finding unit.  It was officially commissioned in May, 1937.  A second XAB-RAB was sent to Guam two months later.  While experimenting with the XAB-RAB was being undertaking, Ray Gordon of NRL invented the Gordon rotating Adcock.  This equipment proved for superior to any previous equipment.  Initially designated XAB-HRO, by the time it hit the production line it was given the designator DT.  Twenty-five of these units were manufactured at the Navy Yard, Washing, D.C. between 1938 and 1939.  Both of the HF-DF systems in Guam and Sangley Point were replaced with the DT’s. In 1939, NRL redesigned the Gordon units and they were given the designator DY.  Fifty-nine of these units were built between 1939 and 1942.

By the spring of 1940, the Navy was operating sixteen HF DF stations manned by 65 operators.  Of the 52 medium frequency navigation stations which had been developed in the early 1920’s, only 22 were still in commission with but six or seven in operation.  These remaining stations were released to the U.S. Coast Guard in July 1941.  At the time of the Japanese attack on Pearl Harbor, the Navy’s world-wide HF DF network was comprised of three net control stations with twenty station and 175 operators.

The XAB-HRO (DT-1) direction finding equipment was approved for procurement and delivery to many of the DF sites which were then assigned to strategic networks.  Additionally, numerous DT-1’s were installed on various Naval Air Station to aid in tracking our own aircraft.  For strategic operations three nets were set up in the Pacific, one in the Atlantic, and a potential net was proposed for the Caribbean area.

The Wullenweber Antenna, formerly known as a Circularly Disposed antenna Array (CDAA) was first build by the Germans in WWII, allowing ADM Donitz to communicate with his submarines.  This was a cover name taken from the Lubeck, GE mayor Jurgen Wullenweber, who served from 1533-1537.  The site in Denmark was destroyed after the war, while the remaining site in Langenargen (Bodensee), Germany was dismantled and re-assembled at the University of Illinois in 1947.  This system was dismantled in 2003.  While earlier versions were “inward looking;” the Navy’s NA/FRD-10 version was “outward looking,” which allowed the headquarters building to be built within the antenna instead of 1-3 miles away.  The FRD-10 had a nominal range of 3200 nautical miles, which corresponds to one or two bounces of an HF signal off the ionosphere.

In the early 1950s, the Naval Research Laboratory (NRL) in Washington, D.C. developed Project Boresight, which permitted a radical improvement in the performance of HFDF networks. The key to the project was the AN/FRA-44 recorder/analyses system, which allowed the operators to record Soviet signals and analyses them after the fact, and then determine the bearing to the source of the transmission. This retrospective direction finding capability was later acknowledged to be one of the NRL’s most significant achievements through its long and impressive history. The capability became critically important after November 1958 when Soviet submarines ceased their Manual Morse code transmissions and effectively went silent. A research program called Project Clarinet Bullseye was initiated in December 1958 to investigate the issue and develop possible solutions. It was discovered in 1959 that the submarines had switched to HF microbursts for their communications. Microbursts lasted only about seven tenths of a second, whereas Morse transmissions had usually taken many seconds or even minutes.

The intercept and DF operators used R-390A/URR high-performance HF radio receivers, designed by Collins Radio Company, which covered the spectrum from 0.5 to 32 MHz. First produced in 1954, it was smaller than the R-390s, and became the standard radio receiver used in US Signals Intelligence (SIGINT) activities through to the 1980s. For example, R-390A receivers were also used with the AN/TRD-4 HFDF system employed at Sasebo, the rhombic system at Torii Station, the AN/FRD-10 at Hanza and the AN/FLR-9 at Misawa. Each intercept position had at least one R-390A. Some operators used two of them positioned side-by-side with a pair of headsets split between them so you could monitor both ends of a [Morse] conversation.

In the mid-1950s, the U.S. Naval Research Laboratory (NRL) developed the AN/GRD-6 system as the standard for Project Boresight HFDF networks.

It had two separate 8-element arrays for covering the high and low bands of the HF spectrum. The high-band monopole elements were called self-sustaining sleeve antennas.  AN/GRD-6 systems were installed in 1956-58 at Kami Seya, Adak Alaska, Kodiak Island Alaska, Finegayan Guam, Midway Island, and Skaggs Island in California, as part of the Pacific HFDF Network and at Homestead in Florida, Galeta Island in Panama, Bermuda, the Azores, Edzell in Scotland, and Hafnir, near Keflavik in Iceland, as part of the Atlantic HFDF Network. By 1960, the worldwide, quick-reaction Boresight project was fully operational with most NSG stations equipped with AN/GRD-6 systems. During the Cuban Missile Crisis in October 1962, Boresight HFDF stations were able to track nearly all Soviet submarines at sea by monitoring their burst transmissions. 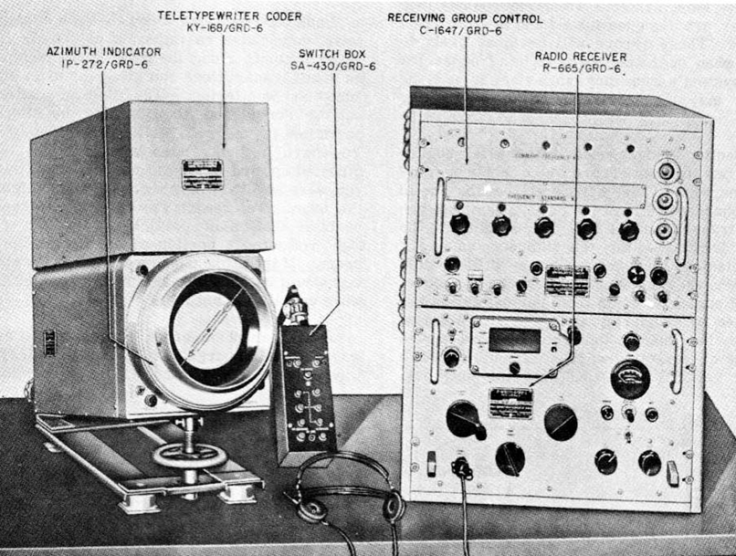 Pictured above represents one half of the required equipment since the high and low arrays each had their own dedicated electronics but sharing the bearing sender and teletypewriter. See the functional block diagram below.  The system consisted of the following components: Azimuth Indicator IP-272, Teletype Coder KY-168, Switch Box SA-430, Receiving Group Control C-1647 and Radio Receiver R-665.

A Marine Corps unit arrived at Kami Seya around July 1956. It was formed as the 1st Special Communications Platoon of the Headquarters Battalion based at the USMC HQ. It had an authorized strength of 43 Marines, including officers and enlisted men. They were all R Branch Morse intercept specialists. Nearly all of them worked in Sections 2 and 4 in the Tunnel. In April 1958, the platoon was redesignated Sub-Unit 5 of Company G, Headquarters Battalion, USMC HQ. It became Company E of the Marine Support Battalion on 1 October 1961.

An Army Security Agency (ASA) DF detachment from the 12th Field Station at Chitose arrived at Kami Seya in late 1959 and began operating in January 1960. They worked out at the GRD-6 site, in the DF operations building located between the low-band and high-band antenna systems; they reported directly to Chitose.

14 FRD-10s systems were installed would wide with a primary mission of tracking the Soviet Navy during the Cold War.  This became known as the CLASSIC BULLSEYE program.  The first one was built in Okinawa in 1959, and others were built in Hawaii, Guam, Alaska, Maine, Virginia, Florida, Puerto Rico, Panama, Scotland and Spain.

The last one built was the Imperial Beach Naval Radio Receiving Facility (NRRF) in 1964.  This site was shut down in 1999 and dismantled in January 2015. Today, the property belongs to the Silver Strand Training Complex and is the premier training facility for the military’s special forces.

2 thoughts on “Early Direction Finding: From WWI Through the Cold War”