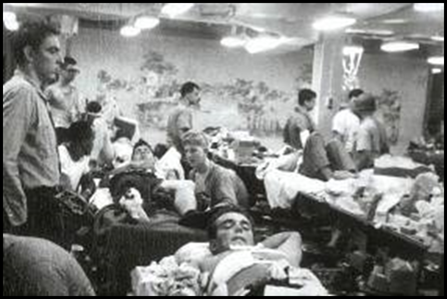 As I stood there waiting, a voice seemed to come out of nowhere, and it said simply, “Get down, and get down now”!!

I know I didn’t move fast enough, but somehow I found myself flat on the steel deck, nose to the steel, and then the explosion occurred.  My best guess as to my proximity to the torpedo, is somewhere around forty feet.   I could hear the shrapnel flying over my head, and little did I know it was killing almost every one of my shipmates, all around me.  The compartment became an instant swimming pool, and the water was up to my shoulders.   I could see the battle lantern that was above the hatch where I needed to get to, and started making my way to that area.   When I got there and went through the hatch, there were many of my shipmates trying to get up the ladder to the deck above, as I was.  The scuttle hole was all that was open in the hatch to the deck above, and when I reached my turn on the ladder, a very strong arm came through the hole, and pulled me straight up, and out of there.  I couldn’t believe the strength it was taking to get one body after another out of the watery grave down below.

When I finally got my legs underneath me I headed to the main deck, and it was a slippery mess all the way up.  I was sliding on a mixture of blood and water, in every step I took.   I reached the hatch to the main deck, and standing there by the emergency generators was Lt. George Golden.  He looked at me, and said, “Ron you turn around and go back down there, and make sure everyone got out”.   I hesitated, but since it was going to become an order, if I didn’t comply, I did as he said.  When I got back to the hatch that I had been pulled through, it was all the way open.  I looked into the darkness down below, and could see nothing.  I yelled into that deep hole, and did so several times, to which there was no answer.  I assumed that everyone who could get out, got out.

When I reached the hatch to the main deck, I reported to Lt. Golden that no one answered.   He was satisfied with that.  You know men talk about strange things that happen during combat, and I am just about to tell you only one of them from that day.  I call them miracles today, but back then I was oblivious to most anything going on around me.  One of the men from engineering was watching us come out of the hatch onto the main deck.  He said we were congratulating one another, and slapping each other on the back, and all the while they were machine gunning the main deck where we were.  I told him that would be impossible not to notice the fifty caliber machine gun bullets flying around, but after thinking about it, I guess we didn’t notice.  I think it could be attributed to being elated over escaping death from down below.   Again right here, I would like to bring up the subject of our training that we received in boot camp, and in schools after boot camp.

I would like to say again, there is absolutely nothing that should have ever been changed with our training, and I mean nothing.  Everyone acted as they should have, there was no panic that I know of, but everyone went about their duties with a discipline, such as I have never observed before.   We were the US Navy, and we acted as such.   The IDF did leave, and we began to try and help the wounded, and the dying.  Every table on the mess deck seemed to have a body on it.  I have no idea how many tables there were on the mess deck, but there were many.  Our Executive Officer lay dying on one of them, and I tried to talk to him, and asked if I could do anything.  He said just get me a cigarette, and go on and help the others.   Well that was Commander Armstrong for sure, as he did like his cigarettes.  He never made it through the day.   There were men who were doing the work of a doctor, or a medic, and I myself bandaged a lot of wounds.  One man came up to me later, and thanked me for bandaging his head, and I looked at the job I had done.  It looked professional to me, and I told him, it must not have been me.  He said it was.