1965-1968:
VQ-2 DET ALFA at NAS Cubi Point, Philippines, and VQ-2 DET BRAVO at DaNang AFB South Vietnam It was not only in routine reconnaissance operations and peacetime crises that VQ-2 saw action.  There was also a hot war to be fought.  The conflict had heated up in Southeast Asia.  By the autumn of 1965, the Navy required a degree of electronic reconnaissance capacity beyond that available from VQ-1, necessary to augment SEVENTHFLT EW efforts in Southeast Asia.  Consequently, beginning under the tenures of CDRs A.D. Burkett and E. Y. Laney, two VQ-2 EA-3Bs, 39 flight crew and ground support personnel were ferried from Rota to NAS North Island, California, and then to Philippines, with stop-overs at NAS Barbers Point, Hawaii (1-8 September, 1965) and NAVSTA Midway Island (8-27 September, 1965).  Under the Operational Control of CICPACFLT, VQ-2 established its DET A or ALFA (not ALPHA) at NAS Cubi Point, Philippines.  Sorties were flown from there to support Navy combat operations, updating ELINT Order of Battle/RADAR Order of Battle (EOB/ROB) and proving MiG and SAM alert tip-off for strike  and tactical or photo-reconnaissance missions against North Vietnam.

After DET B or BRAVO facilities were established at DaNang AFB, South Vietnam, the EA-3Bs operated almost exclusively from that site with VQ-1 aircraft.  With the growth of attacks over North Vietnam, EA-3Bs from both VQ-1 and VQ-2 were routinely deployed aboard CTF 77’s Attack Carriers located on Yankee Station, in the Gulf of Tonkin, to support their Air Wing strikes.

VQ-1 AND VQ-2 DET’s A and B were in the forefront of what is today called “tactical fusion,” bring together the raw information from the six to eight Electronic Intelligence (ELINT) positions and a like number of Communications Intelligence (COMINT) positions to form correlated intelligence in near real-time, and providing it to the aircraft over the beach in the form of AAA, SAM and MiG Indications and Warnings.

The squadron’s newest addition to its Electronic Warfare arsenal was a long time coming.  It all began in 1968-69 with a program to improve and update the EC-121M.  This program, call UPCON (UPDATE Constellation), marked the embryonic stage in the evolution of the new aircraft.  From the beginning, VQ-2 had a major input in the UPCON program despite the fact that it was relatively rare for recipient squadrons to have a large voice in aircraft modification program.  Winton Lowery, Nick Nickelson, LCDR Paul Hendricks, LT Don East, and LT Tenny Kentro did the majority of the squadron’s planning, although much of the groundwork was done in the squadron.  Early in 1970, positive signals were received from the Washington, D.C. and Norfolk areas.  Leadership understood that the EC-121M had been an outstanding airframe, but it was getting tired and parts were hard to find, and a new airframe would be the way to go.  The decision was made to mate the UPCON package with the P-3 airframe. The result was the EP-E3 aircraft, at least in concept.  The EP-3E had been preceded by EP-3As operated by VQ-1 that were modifications of P-3As.  As in any family, prior to the arrival of the new member, names for the newcomer are argued back and forth; so it was with the P-3.  After much debate, the squadron finally decided that their new arrival should be christened ARIES (Airborne Reconnaissance Integrated Electronics Systems). The original P-3, as flown by the VP squadrons, was named ORION; since this was a cousin, a similar name seemed fitting.  Astrology enthusiasts will readily recognize the connotations of ARIES with the EP-3E.  LT Ken Hintz designed the ARIES patch.

Much of the initial work was done by NAFI (Naval Avionics Facility, Indianapolis), which was responsible for integrating of all the individual “black boxes” into one functioning system.  The NAFI people worked on ARIES with imagination, enthusiasm, and a large measure of pure effort.  During the same period, VQ-2 sent operators and technicians to NAFI to acquire the skills in the operation and maintenance of the system.

With the delivery date drawing near, the CO sent some help to Lockheed Aircraft in Ontario, California in the form of Lowery, McKenney, Elwell, Ratchiff, Stanga, Ritterbeck, Herst, Pratt, Olsen, and Beckham.  He borrowed ENS Goerg and PO1 Gillard from NCS (Naval Communications Station) to assist in the checkout. The VQ/NCS crew arrived at Lockheed on June 11 and immediately started flying NPE (Navy Preliminary Evaluation) and BIS (Board of Inspection and Survey) flights on the aircraft.  They remained until July 14 when they flew the EP-3E to Patuxent River, Maryland for a few more checks and tests.  The Skipper was kept informed of the status of the EP-3E as he anxiously awaited “The Day.”  Under the able direction of LCDR George Anderson, his fellow crew members, LT Mike Carrig, ADJ1 Jim Reese and AT1 J. E. Degan plus the VQ/NCS crew, FAIRECONRON TWO’s first EP-3E ARIES 149668/JQ9 arrived on the squadron ramp at 1100 on July, 31, 1971.  To greet the new arrival were top local Navy representative in addition to many of the squadron personnel.  After a brief inspection, the crew and welcoming party celebrated the new arrival with champagne and cake. 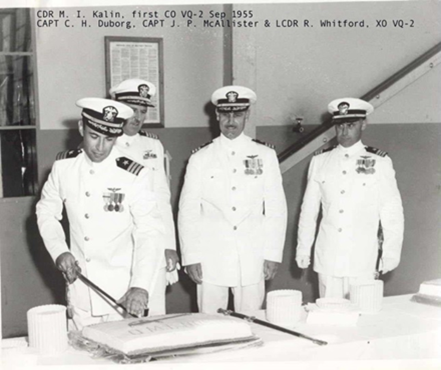 Thirteen P-3A Maritime Patrol Orions had previously been modified to be EP-3E for Signal Intelligence (SIGINT).  Three of them were initially modified as prototypes in 1967 (149669, 149673 and 149678), and were re-designated as EP-3E and used for ELINT reconnaissance systems development at Pacific Missile Test Center.  As a Research, Test Development and Evaluation (RTD&E) aircraft, the EP-3E was utilized to develop the Electronic Emitter Location System (EELS), that later became the primary SAM missile warning indicator device for combat strike aircraft over Vietnam.

However, before becoming EP-3Es, the three P-3A aircraft (ST/SPIN) had been assigned to CIA’s 34th Black Bat Squadron for PROJ AF (Project Air Force).  They were modified by Aerosystems Division LTV for a clandestine reconnaissance project in 1963-64.  External modification included extended exhaust pipes on the nacelles (to reduce infrared signature), shortened propeller blades (to reduce noise), a bulged observation window on top of the aft fuselage, panel and blade antennas, an air cooler fairing with two intakes positioned just aft of the forward starboard observation window, modified bomb bay doors, and a cargo door (created by adding a mirror door to the existing entrance).

Additionally, the MAD (magnetic anomaly detector) boom had been removed and all three aircraft were painted black overall for night operations.  Mission equipment included a Side Looking Airborne Radar (SLAR), special communication systems and infrared detection.  For self-protection the aircraft were later fitted with AIM-9 Sidewinder missiles on four dedicated missiles pylons/rails (two under each outboard wing).  It is believed that one P-3 actually shot down a MiG fighter.  The area of interest for these Orions was the communist People’s Republic of China.  They were flying COMINT/SIGINT mission along the Chinese border but also were conducting missions over the South Chinese Sea, Burma, Tibet and clandestine overland mission over China.  The black Orions have also been involved in missions over Vietnam, flying at night out of Okinawa, Japan.

Note the tail number of the black P-3 Orion on the featured image.

Source: From Bats to Rangers