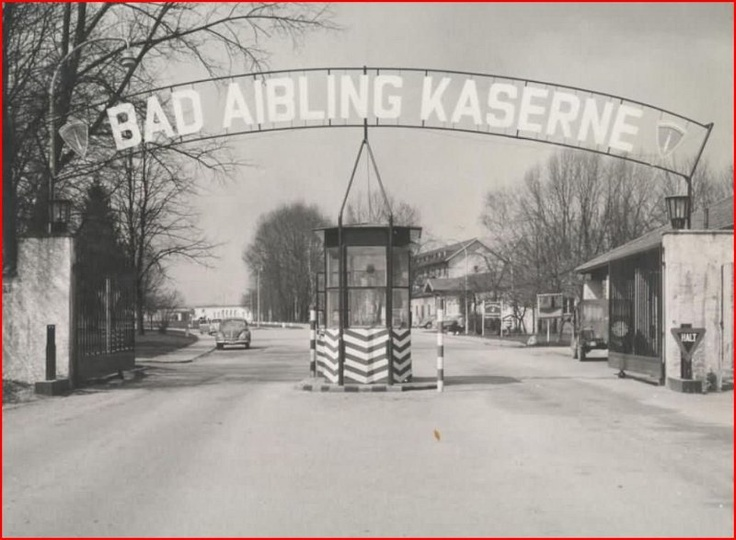 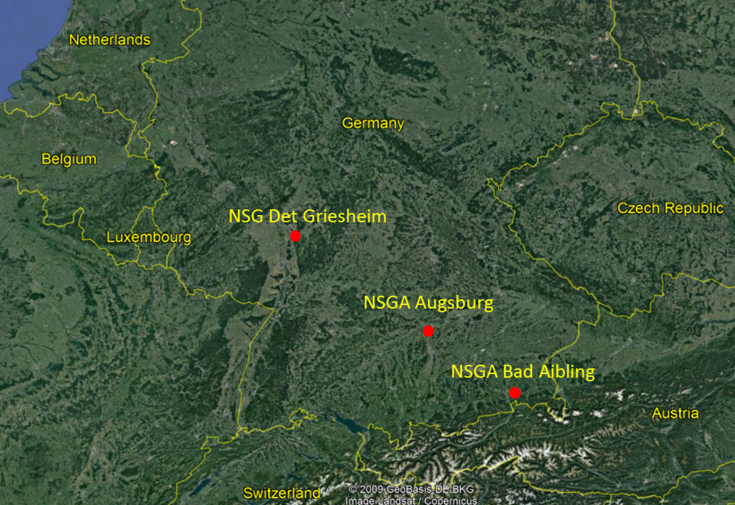 Bath Aibling-Mietraching was originally established by the German government in 1936, as a German Air Base utilized for flight training. In all probability, Adolph Hitler had made plans as early as 1934-1935 for the annexation of Austria and the Sudentenland to the Third Reich. A part of this plan was the construction of airfields in southern

Germany to provide air support for these operations, and the Bad Aibling airfield was one of these. Plans for the camp were drawn up in February 1936, and highly skilled architects were selected from all over Germany to collaborate on these plans. An indication of their importance is the fact that actual construction began in May 1936, only three months after planning commenced. Although the last buildings were not finished until the Spring of 1941, the first troops arrived in February, 1937 and the first planes were delivered in July, 1937. The “peacetime” strength of the camp as defined in that turbulent era, was 1,000 officers and men. This figure was tripled when the large scale actual war began in 1939. The famed Messerschmidt fighter (ME-109) was based here at first, giving the camp the nickname of “Jaegerplatz” (Hunter’s Place).

Even in that short period from May until September, 1939 the design and development of aircraft had progressed to such an extent that the newer fighters were too heavy for the field. As a consequence, the camp was converted to a primary flight training base and remained such until the cessation of hostilities. The development of jet trainers overtaxed the field to the extent that a plan was under consideration to utilize the center strip of the autobahn as a field, but the war ended before this plan could be realized. The camp was built at a cost of 20 million reichsmarks and employed 3,000 people in its construction.

An interesting historical sidelight is the fact that during the initial stages of excavation, graves were found which dated back to the 30 Years War with Sweden in 1618. This created an appreciable furor in historical and archaeological circles. The field was strafed and bombed in the latter stages of the war, but no damage was done to the camp proper.

After the war ended in 1945, U.S. Army troops occupied the military airfield at Bad Aibling, which was located in the American Zone of Occupation. Utilized as a Prisoner of War camp, the majority of the prisoners were from the German southern Army Group in Italy, plus local political prisoners. This number was increased when several German Generals came from Northern Germany to avoid capture by the Russians. After this period, it was utilized by (United Nations Relief and Rehabilitation Agency), UNRRA IRO (International Refugee Organization) and as a combination displaced persons camp and orphanage.

Field Station Bad Aibling was created in 1947 as a communications monitoring station, and monitored Soviet and Eastern European communications during the Cold War. The U.S. Army took over the station in 1952.

In 1971, mission activities of Field Stations Rothwesten, Bad Aibling and Herzogenaurach were consolidated and ultimately transferred to Field Station Augsburg.