From Activity to Detachment

The NSG Activity was downsized to a Detachment on July 1, 1971, and most of the cryptologic and DF mission moved to Misawa, where the previous detachment was recommissioned as an Activity. According to Captain G. Patrick March (featured pictured), commander of NSGA Kami Seya (and later Rear Admiral and commander of the NSG Command), the relocation of the primary mission and functions of Kami Seya to Misawa was dictated by the Japan Realignment policy adopted by the US in 1970-71. Admiral March noted that we were very much concerned that the strong sense of continuity of mission and a tradition of excellence not be diminished. All of the Marines moved to Misawa on June 20, 1971. The large AN/FLR-11 and AN/GRD-6 HFDF arrays were dismantled. Kami Seya remained a Detachment of NSGA Misawa until May 23, 1984.

In a final address at Kami Seya, Captain March said that, “NSGA Kamiseya will be no more. During this period of time from 1952 to 1971 tens of thousands of the Navy’s finest have established an enviable record of achievement and a peerless tradition of excellence.” 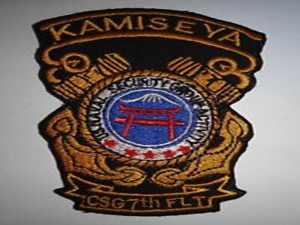 Kami Seya was reinstated as an NSG Activity in May 1984. The station was revitalized, with new buildings and new antenna systems. Subordinate activities were maintained at Atsugi from December 15, 1971 to 1 August 1991, when VQ-1 moved to Misawa. It also had a detachment at Yokosuka until June 1995.

Support to the First Gulf War

The NSGA Activity and the Cryptologic Support Group Seventh Fleet provided significant support to the US Central Command during Operation Desert Shield, following Saddam Hussains invasion of Kuwait in August 1990, and Operation Desert Storm, the first Gulf War in January-February 1991, with the purview of FOSIF WESTPAC covering the Indian Ocean as well as the western Pacific. On January 16, the day war broke out, all Operations, Communications and Maintenance Departments went into a heightened state of preparedness. NSGA Kami Seya was later commended for meritorious service during the period from January 1, 1990 to March 31, 1991 by the Secretary of the Navy. His Letter of Commendation stated that:

Particularly impressive was their support of the United States Central Command and allied forces in the areas of electronic warfare target identification, tactical intelligence, communications support, and cryptologic direct support augmentation during DESERT SHIELD and DESERT STORM operations. Their resourcefulness, initiative, and professionalism were vital elements to mission success during the Gulf War.

The Closing of NSGA Kami Seya

On August 5, 1994, RADM Thomas F. Stevens, Commander NSG Command, announced the decision to terminate all communications functions at NSGA Kami Seya and close out the Naval Security Group presence at Kami Seya by June 1, 1995. NSGA Kami Seya was officially closed on June 1 and its personnel transferred to the new NSG Activity at Yokosuka. The Signals Analysis Laboratory (30 Department) also moved to Yokosuka.