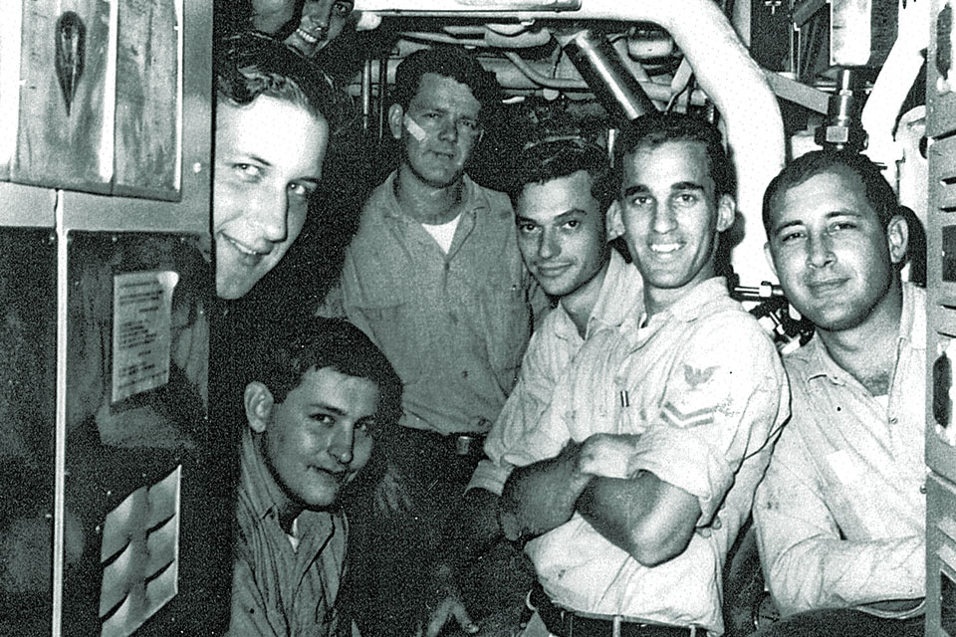 The following is provided by Jim Reeb:
50 Years today the USS SCORPION was lost with 99 crewmen dying in the incident. The following is analysis of what caused the loss of the USS SCORPION by Mr. Bruce Rule. Mr.
Bruce Rule is an acknowledged acoustics expert. You can judge for yourself. Ref: (a) Originator s ltr of 14 Mar 2009 (b) SCORPION SAG Report: “EVALUATION OF DATA AND ARTIFACTS RELATED TO THE USS SCORPION (SSN-589) (U)” of 29 June 1970, prepared for presentation to the CNO SCORPION Technical Advisory Group by the Structural Analysis Group: Peter Palermo, CAPT Harry Jackson, Robert Price, et al. (c) Originator s ltr of 28 Oct 2009

The USS SCORPION was lost because hydrogen produced by the 65-ton, 126-cell TLX-53-A main storage battery exploded in two-stages one-half second apart at 18:20:44Z on 22 May 1968. These events, which did not breach the pressure-hull, prevented the crew from maintaining depth-control. As discussed by reference (a), the SCORPION pressure-hull collapsed at 18:42:34Z at a depth of 1530-feet. Noted times are actual event times on board SCORPION.

This assessment is NOT the generic attribution of the loss of a submarine to a battery-explosion advanced as a default explanation in the absence of any more likely construct. This assessment is based on (1), the results of examination and microscopic, spectrographic and X-ray diffraction analyses of recovered SCORPION battery material that confirm an explosion occurred, and (2), the July 2008 reanalysis of the SCORPION precursor acoustic signals that identified these signals as explosions contained within the SCORPION pressure-hull. Collectively, these findings indicate battery explosions were the initiating events responsible for the loss of SCORPION on 22 May 1968.

DISCUSSIONS: EXAMINATION AND METALLURGICAL ANALYSIS OF A RECOVERED SCORPION BATTERY COMPONENT Section 7.1.3, page 7.2 of reference (b) states: (quote) ….the general battery damage is violent. The high velocity intrusion of pieces of the flash arrestor into both inside and outside surfaces of the retrieved plastisol cover attest to violence in the battery well. The damage to the terminal battery post coupled with the violent tearing of the plastisol covers indicates the possibility of a battery explosion. While it is possible that this damage could have been an after-effect of hull implosion, the SAG (Structural Analysis Group) feels that the intrusion of particles into the plastisol cover would have been much less severe had water been in the battery well at the time. (end quote) Section 5.3.6, page 5.17 of reference (b) states: (quote) The battery installed in SCORPION was a TLX-53-A, manufactured by Gould-National Battery, Inc. Battery cell debris is in evidence over the entire debris field. Table 5-2, page 5.38 provides a list of the battery debris identified by the Portsmouth Naval Shipyard analysis team. (end quote) Comment: Table 5-2 notes damage from heat and melting. The presence of melting eliminates the possibility that such damage occurred as a result of pressure-hull collapse (implosion) because analysis of acoustic data discussed by Section IV of reference (c), confirms SCORPION was fully-flooded within 0.112-seconds of pressure-hull and bulkhead collapse; hence, the melting damage (and the battery explosion) had to have occurred within the still-intact SCORPION pressure-hull.

In consonance with this conclusion, Section 5.3.6, page 5.17 of reference (b) also states: (quote) the Portsmouth Naval Shipyard Analysis Group reports that the available evidence indicates the battery probably exploded at some time before flooding of the battery well occurred. Review of Figure 5-13 indicates that the threads on the terminal posts were sheared off and there are no cover seal nuts remaining. This indicates that an explosion took place on the inside of the cells. The covers were completely blown off. Had the pressure been applied on the outside of the covers, the cover support flange on the terminal posts would have held pieces of the covers and it is expected that the cover seal nuts would have remained in place in at least some instances. (End quote) Further, Section 5.3.6c, page 5.18 of reference (b) states: (quote) the (battery cover) sample from SCORPION had been violently, but locally, torn, particularly at the location of the bus connection bolts and nuts. The deformation in this region appears to have started on the inside, or battery side of the cover. (End quote) And finally, Section 5.3.6e, page 5.18 of reference (b) states: (quote) Some 20 equally small (nearly sub-visible) fragments of material were imbedded at high velocity in both the inside and outside of the sample. The trajectories of the fragments were essentially random, ranging from grazing to vertical incidence. Microscopic, spectrographic and X-ray diffraction analyses reveal that these fragments are identical in composition and structure to the alumina flash arrestors used on the batteries in SCORPION. (End quote)

Enclosure (1) to reference (a), forwarded as enclosure (1) to this letter, provides detailed discussions of four independent lines of evidence that, collectively, established, for the first time, that the two precursor acoustic events that occurred at 18:20:44Z, 21-minutes and 50-seconds before hull-collapse, were explosions from then unidentified sources that were contained within the SCORPION pressure-hull. The energy yield of these explosive events, now assessed to have been battery-associated, is estimated to have been no more than about 20-lbs of TNT each.

The July 2008 identification of the precursor acoustic events as explosions contained within the SCORPION pressure-hull strongly supports the battery explosion conclusion advanced by reference (b), i.e., the acoustic data identifies the actual explosive events previously assumed by the authors of reference (b), the SAG Report, to have occurred based on the observed damage to a recovered battery component discussed above.

Collectively, the above information indicates the two acoustic events that occurred 0.5-seconds apart at 18:20:44Z were produced by explosions associated with the SCORPION TLX-53-A battery, and were the initiating events responsible for the loss of SCORPION on 22 May 1968. Additional information will be provided as developed.
B Rule
Copy to (w/ encl): COMSUBFOR