The Zimmermann Telegram (Part 4 of 4) 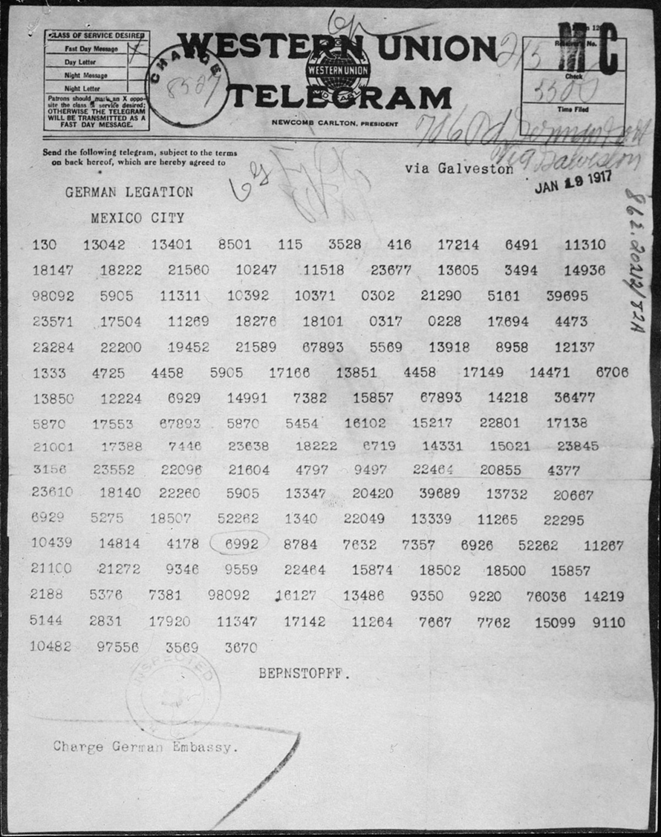 By this time the Germany had just declared unrestricted submarine warfare and the United States had broken off diplomatic relations as a result, Great Britain held the telegram for more than two weeks, hoping that it wouldn’t be needed to prod the United States into war.
However, when nothing happened, on February 22 the British delivered the Zimmermann note to American ambassador Walter Page, who greeted it with outrage. The British told him that they had no objection to its publication but requested that Great Britain not be revealed as the source. They used the Mexican cover story, which Page accepted, to explain their acquisition of the telegram, thus hiding their reading of American message traffic. Page telegraphed President Wilson with the news on February 24, setting in motion a chain of events in the United States that completely altered the nation’s perception of German war intentions.

As the British had requested, the United States government did not reveal the source of the telegram when it allowed the Associated Press to publish it three days later. In fact, a cover story was devised in which the United States claimed that it had obtained the telegram itself but could say no more out of concern for the lives of the persons involved. To support this story, the government retrieved from the Washington office of Western Union the coded original from Ambassador von Bernstorff to the German embassy in Mexico. This was sent to London where, using keys provided by Room 40, an official of the United States embassy deciphered the message. This allowed President Wilson to state truthfully that he had obtained the Zimmermann telegram and its deciphered version from his own people, thus blunting the argument of many pacifists that the message was a fake supplied by Great Britain or France to inflame American opinion.

With a vote 82 to 6, the U.S. Senate to declare war against Germany and the U.S. House of Representatives followed by endorsing the declaration by a vote of 373 to 50.  On April 6, 1917, America formally entered the World War I.