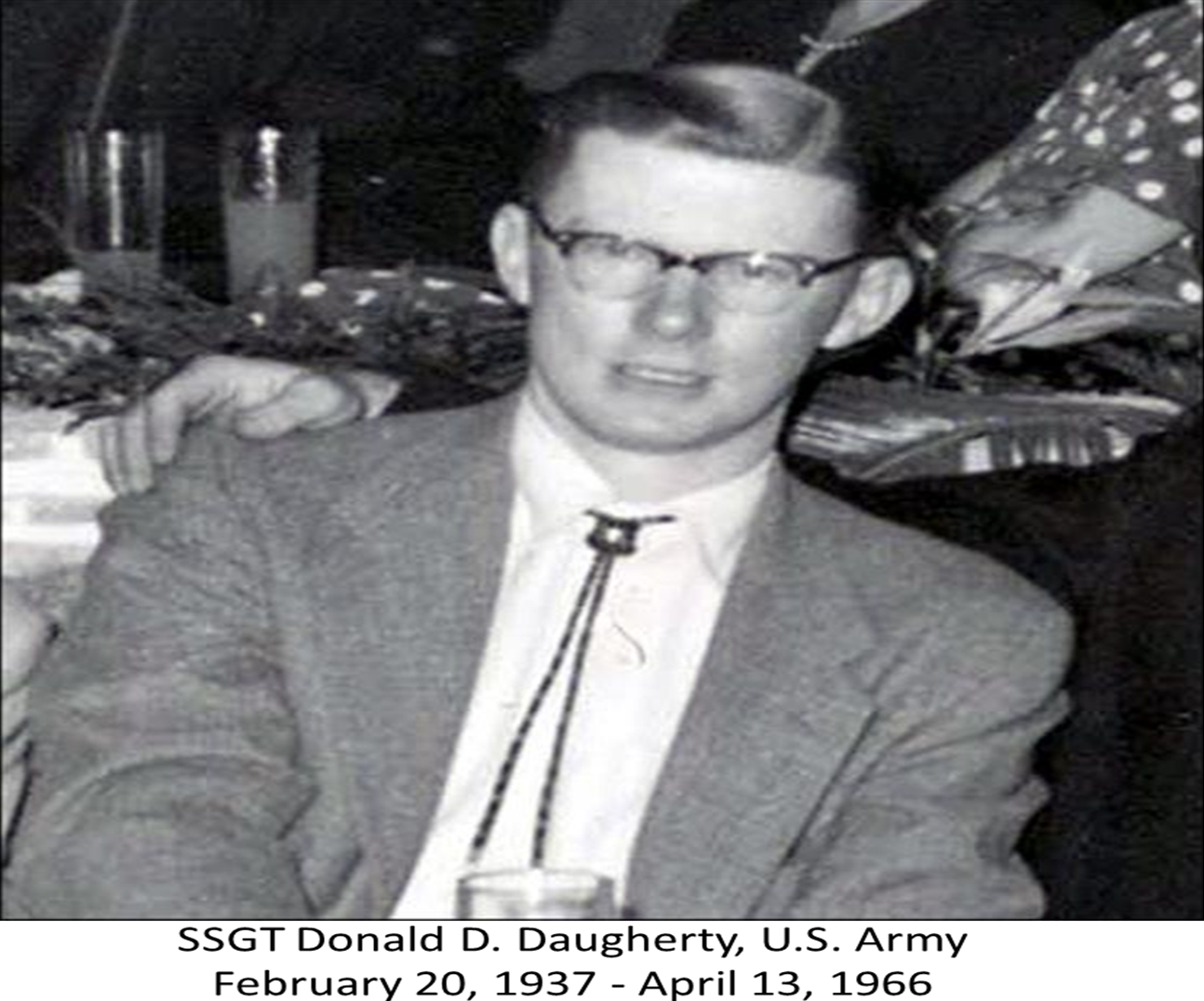 Assigned to the Army Security Agency, 3rd Radio Research Unit (RRU), SSGT Daugherty Military Occupational Specialty was a Morse code intercept operator (05H40).
SSGT Donald Daugherty tour in Vietnam started February 2, 1966 and ended 70 days later when he was killed in action on April 13.  His name is listed on the “They Served In Silence” wall at the National Security Agency and on the Vietnam Veterans Memorial,  Panel 06E – Row 109.  SSGT Daugherty was 29 when he was killed – today he would have been 81.

The following are eyewitness accounts of the first mortar attack against Tan Son Nhut Airbase, just outside of Saigon, RVN, April 13, 1966 that killed SSGT Daugherty:

By Tino “Chui” Banuelos:  Prior to the April 66 mortar attack at Tan Son Nhut Airbase, all weapons and ammo in the 3rd RRU had been locked into CONEX boxes at Davis Station. When the mortars started falling, people were trying to break into the conex boxes to get weapons. The guy with the key for the locks had gone to Saigon for the evening. The 7th RRU, however, had weapons and ammo locked into our 3/4 ton “offices” in the motor pool. When the guys in the 3rd RRU got the conex box open, they found grenades. They had to break open the lock on the second conex box to get to the weapons and ammo.  I was doing a NUG thing and was just standing outside of the hootch watching guys run around in circles. Actually my left leg was running but my right leg was standing still. I saw the flash of the mortar that landed inside Davis Station killing Sgt Daugherty and heard the cries of “Medic!”. John Giles got me moving by slamming me in the shoulder and yelling in my face, “Get in the bunker!”, The next day “Westy” came by to downplay the damage for the media.

By Lloyd Moler:  Don (Daugherty) and I had been friends in Chitose before we came to Davis Station in 1965. We along with several more guys were sitting on the sandbag bunkers between the back of Davis Station and the Landing Pad for the Helicopter Unit right behind us. We were out there watching the Phantoms take off and enjoying a few beers. When the incoming rounds started, we weren’t sure exactly what was happening. The rounds were hitting mostly around the flight line down towards Operations. Once it dawned on us what was going on, Don took off towards the Orderly Rooms and the Arms Room. I took off a couple of guys behind him. We ran down the sidewalk from the back gate alongside a barracks building. As soon as Don made the turn at the end of the barracks, a mortar round hit about 6 foot from him. He was only hit by one piece of shrapnel that I saw. That was all that was needed. I have never seen so much blood in such a short time in my life. Somebody herded us out of there and they were trying to take care of Don. I ran to the Arms Room to try and get my weapon. Mass confusion. I finally got a weapon and some ammo and was put out on the trench line behind the Motor Pool. The next morning, we had a formation in the Motor Pool to count heads. One guy asked his Sergeant if he could go to the Medics. The Sergeant kinda went off on the guy until the guy told him that he had been hit in the back with shrapnel. Apparently he was laying in bed just inside the barracks that Don had been killed in front of and he had been splattered with all kinds of shrapnel. They rushed him to the Medics. Sorry I can’t remember his name. By the way, the attack came right after the U.S. started air strikes on Hanoi.

By Allan Rubin:  I was stationed at Tan Son Nhut from Mar 66 to mar 67. I was an 05H20 and was the midnight E-5 in charge of the ops building just outside the base. The night we were mortared I was sitting at the back gate opening to the airfield in my shorts with some buddies drinking beer when all hell broke loose. We jumped into the ditch, and watched some of Ky’s Skyraiders get hit and a couple jets.  I remember crawling to a bunker next to the barracks and we were all saying prayer’s. If you remember, guys were crawling out of the NCO club cause our MP’s were shooting down the road at anything that moved. They even shot at the ambulance trying to get in the compound.  If you remember when the armorer finally made it to the arms room, sometime later, he was handing out rifles and belts of ammo, there were no loaded clips. Also we set up a machine gun position at the opening at the rear of the compound that led to the airfield and when it was light in the morning they realized they had put the ammo belt in the machine gun backwards. So much for ditty boppers.  By the way, Ssgt Daugherty was in my bunker when the mortars began to fall. We were in the last bunker west, which was near the west wall at the end of the compound and the nearest to the airfield wall, where the opening was to the airfield, and I remember that when the lull in the shelling began, Ssgt Daugherty thought it was over and said he was going to go to the arms room for a weapon. I remember telling him, along with others with me, to stay put and wait awhile, but he was adamant. He exited the bunker and began running down the sidewalk when the shelling started again and he was killed instantly when a shell struck the sidewalk where he was running.  I further remember that all I could think of was I needed a cigarette and I stupidly crawled out of the bunker and into my barracks to retrieve them, then crawled back to the bunker. I probably should have been a statistic also, but we did do some dumb things when we were younger. The rest of the guys sure appreciated having the cigarettes though.  Do you remember after the shelling, as we all left the bunkers, someone stupidly lit off a string of firecrackers and we all dove for the bunker again. Talk about stupid!