USS PUEBLO – An Odyssey of Captivity (Part 2 of 7)

Destruction of Classified MaterialsOn January 23, 1968, about three miles outside of the territorial waters of North Korea extending from Ryo Do island in the vicinity of Wonsan on the East coast of North Korea, the lightly armed, slow moving USS Pueblo (AGER-2) was confronted by a superior force of North Korean vessels which ultimately consisted of two SO-1 class submarine chasers and four P-4 torpedo boats, plus two MIG-21 fighters circling overhead.  One SO-1 submarine chaser closed to within 1000 yards and was at general quarters.  The SO-1 and two torpedo boats fired on the Pueblo killing one man and wounding the Pueblo’s captain and two other men on the bridge.  The North Koreans demanded that the Pueblo heave-to.  Confronted by overwhelming force CDR Lloyd Bucher ordered “modified General Quarters” since it would have been suicidal for personnel to go on deck, and immediately ordered the destruction of classified material.

North Korean gunfire prevented dumping material overboard.  Destruction of classified paper documents and burnable materials was carried out with only limited success by using two wastebaskets for burning in the passageway outside the “Research Spaces” aboard the Pueblo.  At the same time, equipment was being smashed with a sledge-hammer.  The smoke became extremely thick and the fire so hot that the bulkhead to the Chief’s quarters that was adjacent to the passageway buckled from the heat.

Death aboard the USS Pueblo

One of the North Koreans SO-1 submarine chaser fired their 57 mm cannons at the Pueblo while at the same time troops aboard torpedo boats fired their AK-47 assault rifles.  Fireman Duane Hodges was hit while he was jettisoning classified material over the side.  Badly wounded, he was carried to the wardroom table.  After the North Koreans boarded the Pueblo and in the presence of corpsman Baldridge, Commissaryman Reed and a North Korean officer, Hodges died – the only man to die during the eleven-month odyssey of the capture, imprisonment and release of the USS Pueblo crew.

Note: After completing the drawing based on the description provided by Chief Communications Technicians Jim Kell, the artist was advised that Reed was actually wearing a t-shirt rather than an open collared dungaree shirt, as depicted here. 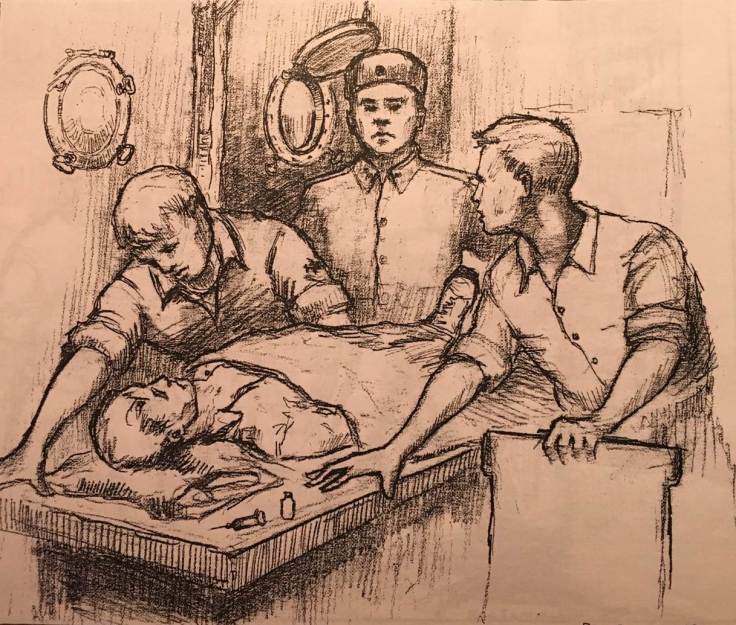 After the USS Pueblo was seized, the Pueblo crewmen were blindfolded and forced to sit with their hands tied, some were placed in the well-deck, and others on the fantail.  A North Korean pilot took control of the ship and sailed her at maximum speed to the port of Wonson, arriving during the night.  The crewmen, with their hands tied in front, had a line lashed to each wrist which went around their back.  One by one they were led to a rickety plank that they walked across to depart the ship.  Immediately, they were placed on buses with covered windows that took them to a train, also with covered windows.  Their destination, as they would find out later, Pyongyang, North Korea.

At one point they were led from the bus, still blindfolded, into a small shack.  Then, one after another, they were pushed and shoved between a line of North Koreans to board another bus, or perhaps the same bus.  As they were shoved along they were hit and kicked, Chief Kell was hit in the side of the face and fell down and stunned.  Forcefully, he was snatched up and pushed along by his captures.

The captive crew arrived at a compound in Pyongyang (though they did not know the location at the time), on January 24, 1968, at about 6am, an hour or so before the winter sunrise in North Korea.  The wounded men were helped by their shipmates. Chief Jim Kell carried SGT Chica, USMC on his back.  The North Korean guards were nervous and had their bayonets fixed.  Most of the Pueblo crewmen walked with their hands at their sides and a few with their hands up.  Given the nickname “The Barn” by the Pueblo crew, they remained captive there for about six weeks before being transported to their next destination.

A masonry and wood building with dim and dingy corridors, the Barn was barely heated.  In addition to the cold, the building reeked with the odors of urine, feces and hay.  Here the crew members were divided up into rooms, four to five men per room.  Each room measured 12 by 20 feet with 12 foot ceilings.  The beds were made of flimsy wooden frames sitting just a couple of inches from the ground with rice husk pillows and mattresses. There were no blankets and most of the beds were not long enough for the crew members.  Throughout the crew’s captivity there, the building constantly echoed with the sounds of North Korean soldiers screaming, yelling, pounding and stomping.