A 1979 graduate of Ferndale High School in Oakland County Michigan, Watson studied engineering for two years at Michigan State University. He dropped out and enlisted in the Navy in 1984.

Today Joseph Watson and his family would have celebrated his 61st birthday.

On May 17, 1987, the USS Stark was struck by two Exocet anti-ship missiles fired from an Iraqi Mirage aircraft during the Iran-Iraq War, killing 37 Sailors and wounding 21.

The aircraft had taken off from Shaibah at 8 pm and had flown south into the Persian Gulf.  The pilot fired the first Exocet missile from a range of 22.5 nautical miles, and the second from 15.5 nautical miles, just about the time Stark issued a standard warning by radio.  The frigate did not detect the missiles and the only warning was given by the lookout just moments before the missiles struck.

The first missile penetrated the port-side hull and failed to detonate, but left flaming rocket fuel in its path. The second entered at almost the same point, leaving a 4-by-6-foot gash and exploded in crew quarters. 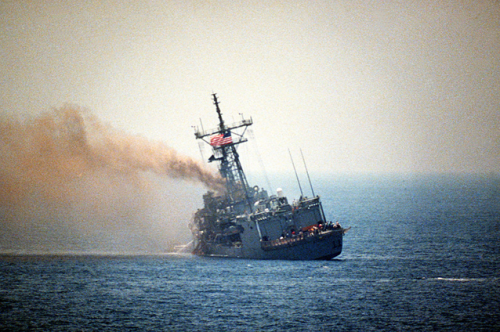 After the damage was brought under control, the Stark sailed to Bahrain and was later repaired at Ingalls Shipbuilding, Mississippi.  Following subsequent tours in the Middle East area, Stark was decommissioned in 1999 and later scrapped in 2006.

President Reagan’s Remarks at a Memorial Service for Crew members of the USS Stark in Jacksonville, Florida on May 22, 1987.

President Reagan’s Remarks at a Memorial Service for Crew members of the USS Stark in Jacksonville, Florida on May 22, 1987

Formal Investigation into the circumstances surrounding the attack on the USS STARK (FFG 31) on May 17, 1987