Harris Monroe “Red” Austin was born in Lincoln, Lancaster, Nebraska to James and Louie Austin on November 2, 1920.  In August 1939, at the age of 18, Red enlisted in the U.S. Navy and attended a 12 week boot-camp in Norfolk Naval Training Station.
Normally boot camp was 16 weeks long, but because of the events in Europe, the Navy reduced boot camp to increase our Navy forces for possible war with Germany.

Following boot camp, Red reported to the USS RUSSELL (DD 414) in Norfolk Naval Base on November 3, 1939, the same day the ship was commissioned for service.  While serving on the RUSSELL, Red was assigned to the “radio shack” where he served as a Radioman and became an expert in Morse code and other communication systems and methods.  For the next two years, the RUSSELL an East coast ship, was assigned to anti-submarine operations responsible for searching for and tracking German U-boats that were a threat to British supply ships transiting the Atlantic Ocean.

In November 1941, Red reported for temporary duty to the USS NEW MEXICO (BB 40) as it patrolled the Demark Straits for approximately four weeks in search of the German battleship Bismarck.  Shortly after Red returned to the RUSSELL, Pearl Harbor was attacked and the RUSSELL was ordered to rendezvous with the USS YORKTOWN (CV 5) just south of Norfolk VA naval base to escort the carrier through the Panama Canal to Pearl Harbor in the Pacific Ocean.  With Battle Ships still smoldering from the surprise attack from the Japanese Imperial Fleet, the RUSSELL pulled into Pearl Harbor to receive supplies and then escorted the YORKTOWN to the Marshal and Gilbert Islands where they participated in the first naval offensive raid on the Japanese targets of World War II.  In October 1943, Red was transferred to the USS NATOMA BAY (CVE 62) until February 3, 1945.

While serving on the USS RUSSEL, Red was in every major engagement except for the capture of Iwo Jima.

In 1948, Red changed his rate to communication technician (CT) and received training in ELINT/ESM (electronic intelligence/electronic support measure) operations and maintenance in a crash course at Cheltenham, Maryland.  Following training he was assigned to Communication Unit 32 located at the Naval Submarine Base in New London Connecticut.  Red’s first assignment was a surface direct support (DIRSUP) operator onboard USS ALBANY (CA 123), followed by USS FARGO (CL 106).  His next assignment was historic as he was hand selected to be first DIRSUP operator to deploy on a submarine! The submarine was the USS COCHINO (SS 345).

After riding submarines out of New London, Red’s next assignment was to the Naval Security Group Headquarters at 3801 Nebraska Ave in Washington D.C. to attend a course in Traffic Analysis and Cryptanalysis.  Following this training, Red transferred to Arlington Hall Station in late 1950 where he worked with CTC Benny Goodman to assist in establishing the newly formed Armed Forces Security Agency (AFSA), the forerunner of the National Security Agency (NSA).  While there, LCDR Markle Tobias Smith asked Red if he would like to ride submarines out of Pearl Harbor to support Seven Fleet operations. Following this conversation Red short toured from AFSA and transferred to Wahiawa, Hawaii to ride submarines in the Pacific. 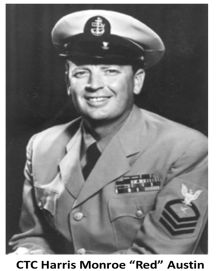 Once in Wahiawa, Red joined LCDR M. T. Smith (ORTG member) to deploy on the USS SPINAX (SS 489), his first deployment in the Pacific.  However, because of the Korean War, he quickly transferred to battleships and deployed on the USS IOWA (BB 61) followed by USS WISCONSIN (BB 64).  Not only did Red use his skills as an intercept operator and code breaker to provide time-sensitive information to the war fighter, but he also advanced to Chief Petty Officer while deployed on the IOWA.

Following his tour in Wahiawa, Hawaii, Red was sent back to NSA in 1953.  While at the agency, Red along with LCDR Fred Thomson (OTRG member) were hand selected to establish a Naval Communication Station at Sangley Point, Philippines, located approximately 20 miles north of Subic Bay.  This advance planning team arrived in 1954 and in 1955 construction began at the new site.  Shortly after operations commenced in 1956, Red transferred back to NSA and was assigned a desk in Naval Security Group area of NSA to work on five separate and distinct target areas until he retired in the fall of 1960. 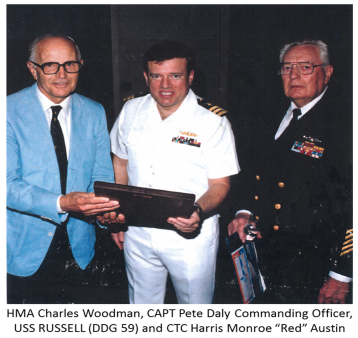 After retirement, Red spent countless hours in the Naval Archives researching information that established the USS RUSSELL (DD 414) as having traveled more nautical miles and taking part in more battles than any destroyer in the Pacific Fleet during WWII.  It was established that between 1939 and 1945 the RUSSELL traveled just short of 500,000 nautical miles, nearly all in the war zones.  It is this record that convinced the U.S. Navy to commission in 1994 an ARLEIGH BURKE-class destroyer as the USS RUSSELL (DDG 59).  At the commissioning ceremony Red was an honored guest and apparently turned a number of officers’ heads as he wore his Service Dress Blue uniform with all his ribbons and battle stars.

**Following this post there will be a five part series on the “First Submarine Direct Support.”  We hope you will enjoy it.