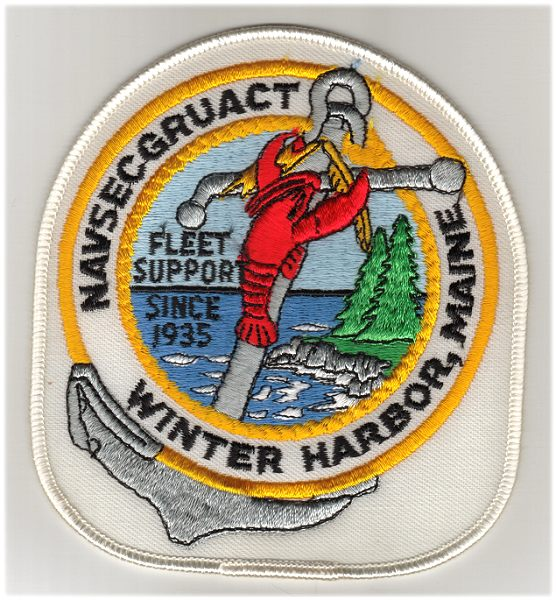 U.S. Naval Security Group Activity (NSGA) Winter Harbor was established on June 9, 1958 and disestablished and closed on June 30, 2002.
NSGA Winter Harbor maintained and operated a high frequency direction finding (HFDF) facility and provided communication support to Navy and other Department of Defense elements. The communications facility located at Winter Harbor included an operations building located in the center of an AN/FRD-10A Circularly Disposed Antenna Array (CDAA), also known as a Wullenweber antenna array. The CDAA ceased operations in 1998 and was dismantled and removed in August, 2001. In September, 20001, Naval Security Group operations ceased in September, 2001.  The CDAA property was officially transferred to the U.S. National Parks Service in June, 2002.

The Otter Cliffs Radio Station was commissioned on August 28, 1917, under the command of then Ensign Alessandro Fabbri. Fabbri, in patriotic fervor after the declaration of war against Germany, cleared the land, and built and equipped the station. He then offered it to the government as a Navy Radio Station to support the war effort, in exchange for a commission in the Naval Reserve and assignment as officer in charge.

Ensign Fabbri sought to make Otter Cliffs the best radio station on the East Coast. Eventually, his efforts were recognized in a promotion to Lieutenant Junior Grade (LTJG) in May, 1918, and to Lieutenant (LT) in January, 1919. Before being released from active duty on June 30, 1919, he LT Fabbri was awarded the Navy Cross for developing the “most important and most efficient station in the world.” The medal and citation were on display in the NSGA Winter Harbor administration building before being decommissioned.

Otter Cliffs Radio Station continued to function long after LT Fabbri left, but by 1933, the wooden buildings had become dilapidated, and due to the economic depression, Navy funds were not available for repairs.

For many, it had become an eyesore on beautiful Ocean Drive, on Mt. Desert Island. Mr. John D. Rockefeller, Jr., was one of the influential people who desired to have it removed. While he found support for his view in several quarters in Washington D.C., Otter Cliffs was very important to the Navy.

Because of the lack of man-made noise within many miles, and the unobstructed span of ocean water between there and Europe, Otter Cliffs was among the best radio sites along the East Coast, and could receive signals from Europe when no other station in the U.S. could. It had been invaluable during World War I, when radio receivers were rather primitive.

By 1930, the Otter Cliffs Radio Station began to receive weather reports from Iceland and Newfoundland, and emergency traffic from Europe, when atmospheric conditions were so bad that Portsmouth, Boston, and Washington could not copy the overseas transmissions.

Big Moose Island, located at the tip of Schoodic Peninsula, about five miles across the mouth of Frenchman Bay from Otter Cliffs, seemed the ideal location.

The architect’s plan for the new station included a beautiful building similar to Mr. Rockefeller’s residence at Seal Harbor. Artisans from all over the world contributed to the project. It has been estimated that to build the same structure today would cost 10 million dollars.

Amended in 1935, the development of strategic HFDF sites world-wide was proposed by the U.S. Navy. Of the eleven sites chosen, four were to be situated on the Atlantic coast, including Winter Harbor, ME; Jupiter, FL; Cheltenham, MD; and either Cabo Rojo, Puerto Rico or the Virgin Islands. Winter Harbor received the highest priority of the Atlantic sites and was operational in early 1935.

On February 28, 1935, the U.S. Navy Radio and Direction Finding Station, Winter Harbor, ME was officially commissioned, with Chief Radioman M. C. Gunn in charge of a complement of 11 sailors.

Chief Gunn departed the station in August, 1935, and Chief Gunn (later LTJG Gunn) returned to the station as the OIC from July, 1943 to February 1944.

Radio interception gradually supplemented HFDF as a form of communications intelligence. Site selection for interception operations was similar to that for the HFDF stations. Naval Radio Station Bar Harbor, Maine was involved as a Naval Monitoring Station as early as 1921, and ceased receiving as a Monitoring Station for the Navy Department on July 2, 1923. Bar Harbor was involved in intercept activities as early as November, 1931. The station was subsequently relocated across Frenchman Bay at Winter Harbor in early 1935. While the primary concentration of its activities had been diplomatic traffic between Europe and Tokyo, Winter Harbor was well situated for other forms of radio interception.

The Naval Security Group moved into Winter Harbor in 1940, with the establishment of Communications Intelligence Unit “W”. In August 1940, the U.S. Navy had six sites with diplomatic targets, which were all linked directly or indirectly through U.S. Army communication circuits, to Washington DC via radio and landline communications.

In March 1941, seeking to improve the interception efforts of the HFDF stations, a direct commercial teletype service link was authorized, procured and inaugurated between the installations at Winter Harbor, ME (Station W), Amagansett, NY (Station G), Fort Ward, Bainbridge Island, WA (Station S) radio intercept facilities; and the Net Control Station at Cheltenham, MD (Station M). This development allowed the stations to forward intercepts immediately to Washington upon receipt. While the primary emphasis was on Japanese diplomatic traffic other “messages of unusual nature appearing to be of sufficient importance to warrant attention” would also be forwarded. The result was improving coverage of radio circuits and minimizing delays in getting the intercepts to the cryptanalysts.

5 thoughts on “NSGA Winter Harbor ME Disestablished 15 Years Ago”