In late November 1961, Admiral Husband Kimmel wrote to the silent screen actress, Corinne Griffith, to explain (in some detail) the background story regarding the attack on Pearl Harbor while he was Commander in Chief, U.S. Fleet and Pacific Fleet, with the temporary rank of Admiral.

The letter went on for 8 full pages and detailed some of “who-knew-what-and-when.”  Readers will recall that Admiral Kimmel and General Short (of the Army) were both relieved after the disastrous attack on 7 December 1941 – allegedly for unpreparedness prior to the attack, although high-ranking officials in Washington seemed to know what was about to happen.

The handwritten letter made quite an impression on the actress. She had the letter framed and for several years thereafter it hung over her fireplace.  Following her death in July 1979, the framed letter went up for auction at the estate sale. It was purchased for $1500 by Vice Admiral David C. Richardson, USN, retired. The estate sale generated a lot of publicity as Miss Griffith left an estate estimated to be worth 150 million and the San Diego Union newspaper featured the framed letter in their 16 October 1982 edition.

Following an exchange of letters, Admiral Richardson donated the “Kimmel letter” to the Joseph N. Wenger Museum, then located at the Headquarters of the Naval Security Group Command in Washington, D.C. Rear Admiral Paul W. Dillingham, Jr. accepted the donation from Vice Admiral Richardson in a ceremony on 21 April 1983. Also, present for the donation were Captain Thomas E. Kimmel, USN, retired, son of Admiral Husband E. Kimmel; along with his wife, the former Nancy Stanley Cookson.

Text of the letter

Mrs. Kimmel and I enjoyed your visit with us immensely. We are always glad to see Mrs. Cowles and George Montgomery and our neighbor Mrs. Avery.

We have read your book with great interest and enjoyment. The account of your visit to Mexico recalls some of my adventures on the West Coast of Mexico from 1913 to 1916 when I served in ships that visited all ports from Salina Cruz to Guaymas. This was the period when President Wilson landed naval forces in Vera Cruz.

I thank you for the gracious inscription and shall preserve the book to pass to my sons.
I will attempt to state briefly what I read to you but you cannot appreciate the following disjointed account unless you are familiar with the facts set forth in my book published in 1954.

Rear Admiral Paulus Powell, Retired, was a captain with much experience in intelligence work in 1941. When affairs reached the critical stage in late November 1941 the Chief of Naval Intelligence Admiral Wilhimson called Powell to Washington and Powell working with the then Commander McCollum reviewed all information in the Navy
Department bearing on our relations with Japan and prepared an intelligence message to be sent to me. He submitted this counter defensive and complete summary to Admiral Wilhimson who approved and urged Admiral Stark to send it.

Presumably Admiral Stark submitted it to Mr. Knox and to the President. Powell believed the message he and McCollum had prepared had been sent. When he heard of the attack he could not believe it. He did not know his message had been emasculated and the so-called war warning message sent in its place on November 27, 1941. Years later he learned what had been sent.

Safford testified the so-called Winds Message which indicated Japan would attack the United States was received in the Navy Department on December 4, 1941. General Carter Clarke now confirms this. You will recall the brutal cross examination Safford suffered before the Joint Congressional Committee in an unsuccessful effort to make him change his testimony on this and other subjects.

On December 6, a Japanese intercept was decoded which stated a reply to Mr. Hull’s ultimatum would be sent in fourteen parts. Thirteen of these fourteen parts had been received in the Navy Department by three p.m. December 6, 1941. It is highly probable that Marshall and Stark were given the gist of these parts as they were decoded because this was standard practice when an important communication was being received.
It is my belief that both Marshall and Stark knew the contents of these thirteen parts before they left their offices on December 6, 1941.

The copy of the smooth translation was not ready for distribution until 9:00 p.m. December 6. 1941 when it was shown to Mr. Roosevelt who read it and exclaimed, “this means war!”

By 11:00 p.m. the message had been shown to Mr. Hull, Mr. Stimson, Mr. Knox, the Chief of Army War Plans, the Chief of Navy War Plans and others in key positions but Marshall and Stark could not be found!

Stark took no steps to inform the fleet and waited until Marshall appeared in his office as McCollum stated in May 1961. I enclose a copy of the substance of McCollum’s statement.
This is the first time I learned that Marshall was in Stark’s office on the morning of December 7. 1941. No-testimony heretofore given before all the investigators even hinted at such a meeting. It is also the first statement about an “agreement” that only Marshall would be permitted to send messages to Hawaii dealing with the crisis. I had inferred from the sequence of events that only Marshall was sending such messages at this time.

Needless to say the “agreement” had to be an order from Mr. Roosevelt as was the disappearance of Marshall and Stark from their ports of duty during the most important crisis of their careers.

May 1961 General Carter Clarke stated Marshall knew the Japanese were on their way to attack Hawaii and deliberately withheld the warning until it would be ineffective. He also told how Marshall had sworn to secrecy all personnel in the War Department who had knowledge of the Japanese intercepts.

Safford found the files of the Navy Department stripped of the Japanese intercepts received during the period of crisis immediately preceding the attack but discovered a “cache” of these messages in a safe probably placed there as insurance.  These he restored to the files believing at the time that they had been inadvertently removed.

I hope this scrawl makes some sense to you. Our regards to you, 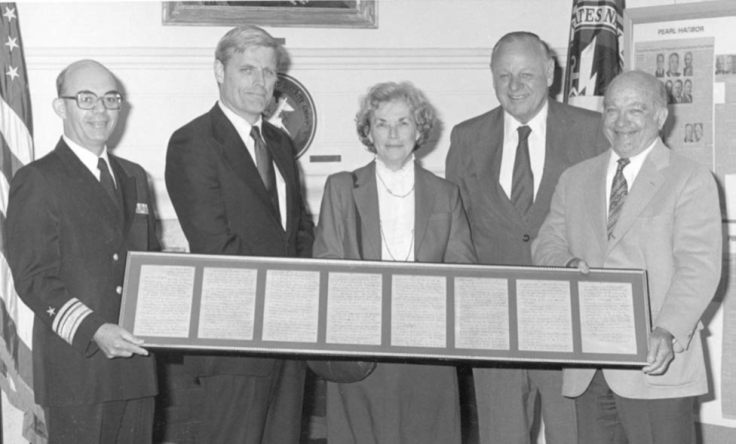 In August of 1995, The Naval Security Group Command moved from 3801 Nebraska Avenue home to a new location on Fort Meade, Maryland. At the time there was no room for the Wenger Museum and its historical contents. Eventually, the Museum moved aboard the Center for Information Dominance, Corry Station, Pensacola, Florida and became the Command Display, operated under the auspices of the Naval Cryptologic Veterans Association. The “letter,” although not on general display due to its condition, is an important artifact of the collection. It is a tangible link between cryptology and one of our nations defining moments. Plans are currently underway to do restoration and preservation work on the somewhat deteriorating letter using 21st century materials and methods not available nearly 50 years ago when the letter was first framed. Also planned is to digitally copy the original pages. Following restoration and preservation, the letter will once again be proudly displayed for all to see.

Source: “Echoes of our Past” Jay R. Browne